Relocating to London?
We can always count on drama where Natalie is concerned. There's no doubt that she's dealing with many emotions right now but moving to London will not cure this red head's problems. I'm a little disappointed that she seems to have completely forgotten about Jared's recent passing. It would have made for a good scene to have her visit Jared's gravesite, maybe show a little grieving penance for her recurring feelings for John, even though they aren't exactly a sin. Doing more of these scenes where they fit into storylines reconnects the viewers with those characters who are gone. They most always make for emotional touching scenes.

What Not to Wear!
Well thank the Llanview Gods that Jessica decided not to wear the dress that Asa bought her for prom eons ago! If she had worn the dress it would've made for a perfect "What Not to Wear" episode. And of course, knowing Jessica she would've giggled during the whole segment, insisting to hosts Stacy London and Clinton Kelly that the dress was still in style. Thank you writers for not subjecting us to that. I agree with Brody… This may be his last shot at getting Jessica back and I hope that something springs into her mind and she remembers him already. I will tease you with the fact that Jessica will regain her memory. As for a timeframe, or if her current state will affect her past feelings, that is still unknown. Langston, she's another one who needs to get her life together. As the weeks go by I feel as though some storylines just keep repeating themselves through scenes, actions and dialogue. It's a challenge sometimes to bring some freshness to these recycled scenes when writing the recaps.

Fo' Shizzle My Nizzle!
On a happy note… I can't wait to see what Bo and Nora have planned for their upcoming wedding. It'll be hard to top their last one and I'll admit… I wouldn't mind seeing Snoop Dogg return to add a little Fo' Shizzle My Nizzle to their nuptials!

Is the Truth Hidden in New Mexico?

Next week... Rex and Gigi will get closer to the truth but it's clear someone wants to keep it hidden. Roxy dishes out some advice to Natalie. And now that everyone has a date for prom Starr X'd Lovers: The Musical begins. Will there be a few surprises along the way? You bet! Take a look at some of the May Sweeps Spoilers today!

Thanks for stopping by and be sure to leave me a comment. Don't forget to check out my Saturday Teaser Poll surrounding who Clint and Viki confide in. Do you want more soap scoops? Follow Soaps.com's Editor-In-Chief on Twitter @soapoperafan and join our official Facebook page today.

I want to wish all of the mothers out there a very Happy Mother's Day on Sunday! I'll see you back here next Friday for another week's worth of Amy's "One Life In A Week!" 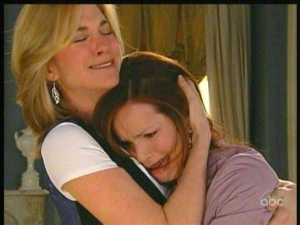 Frenemies?
Tea received some pretty bad news this week. I’m looking forward to this very realistic storyline and all that it will bring. In the end, I hope it doesn’t mean an exit for Florencia Lozano. Please take a moment to let us know your feelings about this storyline through our Tea’s Diagnosis Poll. I’m really excited about Blair’s recent empathy for Tea. Believe it or not, sometimes it’s possible that even your worst enemy can be of more comfort to you than those you love. I think with Blair Tea will be able to let all of her feelings show without the added burden of hurting her family by doing so in front of them.

Not Your Average Father of the Year.
I enjoyed Todd and Dani’s emotional scene in his hospital room. Even though Todd managed to bash Tea for the way she raised Dani he professed to always be there for his daughter. I know Todd is a great villain but some of my favorite Todd moments are watching him as a caring father. Even if he tends to go over the edge in an attempt to be one. Speaking of going over the edge, Cole did just that. I was glad that the judge didn’t let him off the hook so easily. Bottom line, he almost killed Todd and in society that’s a big no-no. I know, Todd’s gotten away with worse, but I want to see Cole have to fight to reclaim his life. Realistic touches in storylines go a long way with me.

Family Loyalty.
I’m glad Kelly and Blair have finally reached a truce but hadn’t they reached one in the past as well? It’s neither here nor there. I have a feeling these two will always have a rift between them but when it comes to the Cramer women they are always there for each other no matter what. Onto Kelly and Reed’s relationship… It’s clear these two shared a major attraction back in London. However, I’m not buying the fact that Reed is just simply smitten with Kelly. I think Reed holds a much deeper secret. One that involves the mystery surrounding Melinda’s death. Only time will tell… 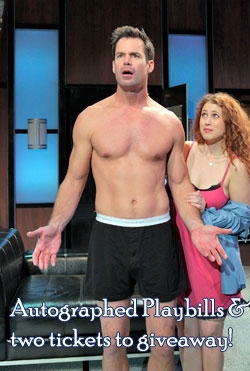