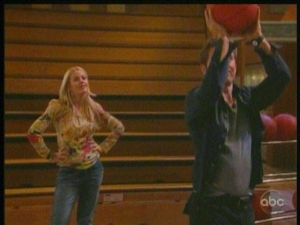 Just when we recently recovered from Mitch’s kidnapping scheme, his disciple Allison went out and did a little kidnapping of her own. Brody challenged Jessica to a game of Horse, and if you watched all of the episodes, there was a heck of a lot more that went on too! Let’s take a peek…

Strip away, Brody, strip away:
Finally, a Jessica scene that I did enjoy! Brody and his game of Horse was a perfect way, and on Jessica’s level, to get her to go out with him. Did anyone else notice how Jessica was staring when Brody took off his shirt? Hell, if it takes him stripping naked and running through the high school hallways on a dare to get Jessica to remember, I’m all for it! Strip away, Brody, strip away. Her claiming to have gotten over Cris was a bit over the top. Just get your darn memory back, Jessica, because I’m so over you – as a giddy high school girl.

Tea refused to take another man away from Blair:
Blair chose to connect the strings between her and Elijah and shoot for something more than just wall-shattering sex – even if it took Jessica to make her see the light, which is beyond me. I’m all for this pairing and loved Tea’s little jab as she left Blair and Elijah to their private relationship consultation by saying she didn’t want to be responsible for taking another man away from Blair. Good jab! While Blair and Tea have been able to put their differences aside in the past, for the sake of their kids, this is one rivalry that will never end, and I don’t want it to.

No, it’s a meatloaf, Roxy:
Did Rex actually do something smart by not marrying Gigi for all of the wrong reasons? Well, I’ll be, I think he did! I guess even I got ahead of myself last week, saying they could make a marriage work, but I never expected Rex to be logical, after the months we’ve been forced to watch him act the opposite. What I’m most interested in is what Allison is holding over Roxy, concerning Rex. It’s ironic that the funniest line of the week came at the cost of Sierra’s kidnapping, who’s now in the clutches of crazy Allison, but it was funny all the same… “Is that a baby?” Roxy asked, to which Allison replied, “No, it’s a meatloaf, Roxy.” Another funny scene was Dorian laughing that Kim’s purse was a knock-off to Dorian’s designer one, and Kim informing Dorian that her husband, Clint Buchanan, loves to keep her happy! The look on Dorian’s face was priceless. Funny stuff aside, everyone is racing to save Sierra and the excitement is only beginning. Next week will bring many revelations and a huge audience to view them!

Ford could be fun if you're out for one thing:
Ford is not only a player, but a major dog with no manners who likes to eat pizza in bed, next to a woman he just slept with while kicking Langston to the curb over his cell, literally in that order, and with his 'I Love Pizza' shirt hanging from his headboard! This guy may be hot, but he's the epitome of a total loser, a loser in the biggest sense, and I am so over seeing him shirtless, showing off those tight abs and want him gone yesterday! With that being said, he could be fun to play with if you're a woman only out for one thing, a little afternoon delight with no strings attached. I posted a Ford, Langston and Markko Poll and would love to get your take on how you'd like to see Langston's affair with Ford pan out, so please vote quick because the way things are going, Markko's apt to find out soon.

Starr X'd Lovers:
By now you all know I'm not a fan of the musical storylines, but this may be one to watch. Damn, I knew the actresses could sing but never realized just how great the voices of Kelley (Dani) and Shenell (Destiny) really were. If this is the singing we have to look forward to, bring it on, by all means! However, I can already tell, just by Starr's comment to Langston, who's going to land the leading Starry role… Poor Destiny, who's she going to play if Matthew lands the leading male role?

She's worth every cent I'm paying:
Is it just me, or does it appear that Todd could have an honest attraction to Kelly? Whatever the case, still loving this non-couple!

What do you have to look forward to next week? Someone is faced with a medical emergency. Allison delivers news to a captive audience. Will we finally get the facts about her hidden secrets? David returns, and Kelly turns to someone for help. Is it someone we know? Find out all of the spoiler details today!

Thanks for stopping by and be sure to leave me a comment. Don't forget to check out my Saturday Teaser Poll, surrounding who David has under his thumb. If you're a fan who can't get enough of the various soap scoops, and want even more, follow Soaps.com's Editor-In-Chief on Twitter @soapoperafan and join Soaps.com on our official Facebook page for daily chatter, news and teasers.

One Life to Live: John-Paul...