One Life to Live’s Tuc Watkins In White Lies! 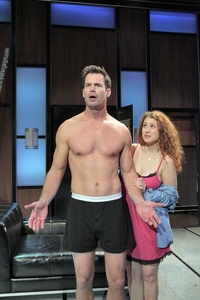 Onto the stage Tuc goes!

One Life to Live’s very own Tuc Watkins (David Vickers) has just landed a new gig. Replacing Scott Patterson, who had to step-down due to scheduling conflicts, Tuc will appear in “White Lies,” as Joe White.

Produced by Aaron Grant, Jana Robbins, Jeremy Handelman, Craig Haffner and Karl E. Held, the Off-Broadway production will preview at New World Stages at 340 West 50th Street in Manhattan on April 12 and will surround Tuc’s character, who is described as, “…a divorce lawyer, representing one of his many ex-girlfriends and above all else, he’s a bachelor who wouldn’t have it any other way… when his mother desperately wants him to start a family, he’ll do the next best thing: make one up!”

Call 1-212-239-6200 to order your tickets today. To find out more about Tuc's acting credits, please visit his Actor Profile.

One Life to Live's Sean Ringgold On...

One Life to Live: John-Paul...