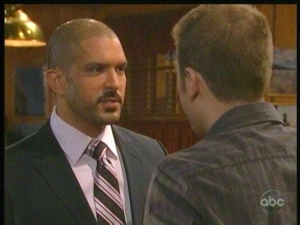 Roxy knows how to celebrate! (Soaps.com)

We may be upset with some of the storylines, but we have to be thankful that the NCAA Basketball Tournament wasn’t on ABC, which allowed us five full episodes, unlike those who were forced to miss a few of their CBS soaps. With that being said, let’s dissect Llanview, and those creating a ruckus in town, together. Here are just a few things that caught my mind’s eye this week…

Here we go again, Greg has appeared to have reverted back to a bit of his old self, one I am not liking very much these days. It’s evident his beef with Schuyler goes way beyond something Greg can’t prove happened at the hospital – even though it did. If you ask me, he hasn’t liked Schuyler from the moment he moved in with Rachel, and now Greg’s making it his mission to make sure everyone else doubts Schuyler as well. I feel as though I’m on a rollercoaster ride with some of these characters… I like them, I don’t, I like them, I don’t – makes me want to grab a daisy and start pulling away the petals one by one!

A hint of a new twist occurred this week… Allison managed to confuse Mitch, which is hard to do, with talk of Schuyler and Sierra, using them as pawns to help Mitch escape, and Roxy confused Gigi with talk of Allison taking away her baby, which Gigi ultimately thought to be Rex. However, could it be possible that Schuyler was the baby Allison took from Roxy and switched with Rex? I’m puzzled already! If we were confused about Natalie and Jessica being twins, with two different fathers, I can bet the writers will have their hands full trying to explain this one… On a side note… What do you think about Gigi’s marriage proposal to Rex? No matter what her reasoning is, I think these two could make it work, as it’s evident that they still have a long history of falling in and out of love – or maybe they never truly stopped loving each other over all of these years?

I was happy that Schuyler hauled off and punched Rex. When Stacy was pregnant, Rex gave up everything to take care of his unborn baby, including a life with Gigi, and he has the nerve to demand that Schuyler hand his daughter over to Gigi? Even though we know Sierra isn’t Schuyler’s, he’s doing the same thing… giving up Gigi to take care of his daughter – you’d think Rex would see that? But we have a bigger problem now, and her name is Allison Perkins!

Not only did John do an admirable, and right, thing by agreeing to stand by Marty's side, I hate to say this, but it's evident John really does care about this baby. Or could it be he has no choice but to stand up and be a man? With that being said, I don't think it's enough to keep him away from Natalie - and the hold she emotionally, and sexually, has on him. The scene with Natalie and the girls meeting up with the guys at Rodi's wasn't only fun, Natalie and John's toast to 'good times' gave us Jolie fans some lingering hope. Did I mention how fun it would be to party with Roxy, drink green beer and dance to "Come On Eileen?"

While Roxy is usually the one to win my funniest scene of the week, Natalie easily took over that spot on Monday, starting with her telling Clint - her father - that his brain must have been in his pants when he agreed to marry Kim. From there, Kim arrived at Llanfair, threw her coat at Natalie, as though she were the maid then marched right in to stand at Clint's side - the whole scene, including Viki trying to play referee, was hilarious! Kim better get Nigel to dust off the Buchanan golden gloves because she's going to need them with Natalie hounding her.

Jessica punching Todd and giving Blair a few choice words about Cris made up for the annoyance in her scenes. However, it was Cris' inner emotional struggle that got me through the ridiculous flashbacks. Why in the world would the writers show us flashback scenes of Jessica and Cris played by totally different young actors - even though different 'longtime' actors did play the characters at the time? We, the viewers, watched them fall in love, and the scene in the gym would have been much better if Jessica and Cris simply talked about their past - without showing us flashbacks of people we don't even know. I realize that normally new actors are brought in for these types of things, but in most cases, it's to give the viewers a glimpse of a time that was never aired. All I can say is I'm glad Cris ultimately chose Layla. Why? Jessica needs to get her memory back - and fast - because Bree Williamson is too good of an actress to be thrown into these horrific scenes, which have played on my last nerve. Okay, I'll get off my rant now. It's not very often that I get in a tizzy about a storyline, but this one... Someone bring me a bottle of aspirin and some Pepto, please!

Back in February, I reported that the show is going to be airing a few more musical themed episodes in May titled Starr X'd Lovers - yep, Langston's musical. I've said it before, I'm not too keen on these storylines, but with more kids added to this one, including Matthew, Destiny and Todd Jr. - I mean Dani - it might be interesting, not to mention the fact that Langston wrote it, while cheating on Markko with Ford, behind Starr's back, about Starr and Cole, who is keeping secrets about Hannah from Starr… Oh the young drama is really starting to unfold.

As I said last week, I love, love, love these scenes with Todd and Kelly. Kelly's flashbacks this week were great, [Bravo writers for showing us the correct flashbacks!] as she had so many past, fun storylines, which evolved the character into what she is today. I knew this would reopen the recently closed-off feelings Blair has for Todd, but I disagree with them… I think Blair should jump at the chance to have something more than just sex with Elijah. He's not only hot, has a great job, he's prime real estate in Llanview! Who wouldn't want to jump aboard and take everything that hunk of a man has to offer?

What do you have to look forward to next week? Roxy comes across a shocking discovery. Does it involve another secret? Brody makes a plea to Cris. Will he ask him to back off or to be there for Jessica? And with the baby drama in full swing, visit our OLTL Spoilers to find out what's about to happen next!

Thanks for stopping by and be sure to leave me a comment. Don't forget to check out my Saturday Teaser Poll, surrounding who Rex needs help fighting against. If you're a fan who can't get enough of the various soap scoops, and want even more, follow Soaps.com's Editor-In-Chief on Twitter @soapoperafan and join Soaps.com on our official Facebook page for daily chatter, news and teasers. You can also catch me on Facebook for everything Llanview!