One Life to Live: Goodbye To Kyle Lewis and Oliver Fish… (UPDATED!) 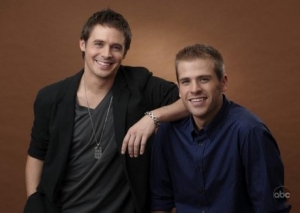 Fans can expect to see ‘Kish’s’ last scene on April 12. Though we won’t see Scott (Fish) anymore after that, we will see Brett (Kyle) once again on April 16.

In regards to the recent news on Kish leaving the canvas, a One Life to Live Spokesperson has contacted Soaps.com with this statement…

“The groundbreaking Kyle/Fish relationship on “One Life to Live” was embraced by fans both as a great story and a fair and honest reflection of the LGBT community. We’re glad their story resonated with the audience, and understand the fans’ disappointment now that it has concluded. The show has a history of bringing LGBT stories to the screen – earning two GLAAD awards in the process – as well as returning popular characters when they serve the ongoing story. These great characters remain in Llanview, and while there are no immediate plans to advance their story, the door is always open for their return.”

Surrounding another storyline related move, TV Guide Magazine is reporting that One Life to Live will soon be writing Kyle Lewis (Brett Claywell) and Oliver Fish (Scott Evans) off the canvas…

Apparently the show has received everything they were after with this couple. However, now with the truth about to come out this month involving the paternity of Sierra Rose, our days of seeing Kish on a regular basis will end toward mid-April.

If you don’t want to know how the custody battle is going to end, please look away now…

The couple will not leave Llanview onscreen, but they’ll be off putting their time into raising the baby. One comforting note is… Fish will still be employed at the Llanview Police Department, so we may get to see him from time to time. However, the operative word is ‘may’.

Soaps.com has enjoyed this coupling and storyline immensely, and we hope to see Brett and Scott in their roles sometime in the future. To find out who else will be leaving the show, please visit our One Life to Live Comings and Goings.