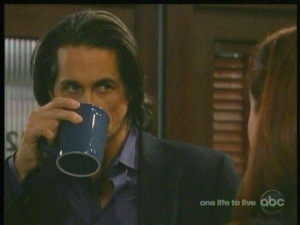 The custody battle and Marty’s pregnancy had my head spinning like Regan in “The Exorcist” this week. Who should raise Sierra Rose, and hold on to your hats fans, Marty’s pregnant with John’s baby? Talk about a twist! Whether we like it or not, we’re left to deal with it, as is Natalie…

Roxy had me in stitches with her references to Marty being pregnant and even shocked me a bit with her sensible advice, that Marty tell John the truth. I can’t imagine John being ready for fatherhood, given that he can’t get Natalie out of his head – or away from his lips – and it’s obvious that Natalie isn’t ready for John to be off limits in such a way either. Boy, did Natalie let the cat out of the bag on this one!

It didn’t surprise me that Hannah was a victim of Ford’s love ’em and leave ’em scam but it was clear that she had no intentions of forgetting what he’d done to her. Let’s hope she’ll be the one to show Langston the light because I’m really not up for another psycho on the loose storyline – we already have Allison Perkins running around Llanview, snapping up pictures of the kids in town. I had to giggle when she told Shane, “Say ‘Heed The Messenger’,” before she took his picture!

Clint may like throwing around the sugar, but he’s no fool and proved it by presenting Kim with a pre-nup, which she ultimately signed. You’d think Kim would’ve had a fling or two since arriving in Llanview, but she hasn’t, so her giving up an extra-marital sex life didn’t appear to be that big of a deal to me, especially since Kim has made it clear she has no quirks about the possibility of sleeping with Clint. In the end, she did something very unselfish in the name of Sierra Rose, which makes her okay in my book. Since Amanda is leaving soon, it’ll be interesting to see how Kim’s recent marriage to Clint unfolds… Is it me, or are you enjoying Stacy as a figment of Kim’s imagination more than you did when she was alive?

I’m getting bored with Fish and his temper tantrums. It’s clear that Kyle is the mature one in the relationship, always has been, and Fish needs to buck up and claim his daughter already! My heart breaks for Schuyler, even though he did get sucked in by the devils, Kim and Stacy, but it’s Gigi who I’m annoyed with. Granted she and Stacy made peace before her death, but instead of constantly saying she’s going to do right by her sister, Gigi would fare better if she made her intentions about Sierra – not the sister she could hardly stand. Back to Schuyler, news came that the show is letting Scott Clifton go. I’m not happy about this at all and talked to Scott about his exit. Find out what Scott teased in regards to his remaining days in Llanview… Rachel and Greg’s break-up… It doesn’t take a genius to see that the show is setting us up for Rachel’s Llanview exit as well.

Jessica as Cristian's student, and classroom cougar, kill me now… This has got to be one of the worst executed storylines in history. Note to Writers: High school girls don't act that way in this day and age… If they are going to allow her to 'go back' then send Jessica back to pre-school or St. Ann's because I don't know how much longer I can take this. Hey, here's a thought, let Mitch out of jail, so he can zap her memories back into her head. If something doesn't break soon, including my sanity, I have a feeling Layla is going to lose it as well… Did anyone else notice in Monday and Tuesday's episodes (same scene sequence) that when Jessica was in class, she had her hair up in that prissy ponytail, yet when Cris found her arguing with Layla at the diner, after school, her hair was down? [See photo] Makes one wonder if a few brain cells returned during the walk/drive over there? Or maybe she made a pit-stop at Foxy Roxy's and had that poof-top styled down?

I knew it would take more than getting her out of a suspension sentence to get Dani in Todd's good graces, so her actions at the diner didn't surprise me. Todd's offer to Kelly, on the other hand, was a welcomed storyline twist. These two are more alike than they care to admit and have shared some great scenes in the past. This is going to open up the prior Kelly/Blair feud, which was always fun. I'm all for Kelly going back to her reporter roots to shake things up a bit!

Here we go again, Dorian backtracking to suit her ego. She had no right going to Viki and pleading for her to take Charlie back. Her actions fall in line with Mitch and Allison's latest scheme, whatever that may be - boring. Let's get this ball rolling already. Either Mitch has a prayer in the world or he doesn't. Whatever the case, if I could have one wish right now, it would be to wrap this storyline up - since we know Roscoe Born's time on the show is now up.

What do you have to look forward to next week? John confronts Marty about her pregnancy, but will she admit she's pregnant? Someone becomes suspicious of Langston, Kelly is faced with a decision and Gigi goes to Rex with a proposition… Will he accept? Visit our OLTL Spoilers for more scoops!

Thanks for stopping by and be sure to leave me a comment. Don't forget to check out my Saturday Teaser Poll, surrounding who takes Roxy's comments into consideration. If you're a fan who can't get enough of the various soap scoops, and want even more, follow Soaps.com's Editor-In-Chief on Twitter @soapoperafan and join Soaps.com on our official Facebook page for daily chatter, news and teasers. You can also catch me on Facebook, for everything One Life to Live!