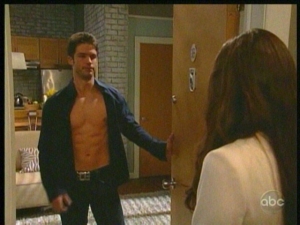 An unexpected death occurred, old characters returned and so much happened in between… There was a little bit of everything thrown out for fans this week. Some of it had me wanting more, but other storylines, more to the point a certain character had me fried to the bone – Hint: My SUV happens to be made by his surname…

Langston finally gave in and slept with Ford, and if I could’ve jumped through my screen while the arrogant SOB laughed to himself about bedding her, then went and taunted Markko about his workout, I would have slapped the puke silly! Ford is hot and all – okay, he’s smoking hot – but the way he’s using Langston, knowing everything she has to lose, just ticks me off. Why not go after a more mature woman who doesn’t mind a one-nighter? I guess the chase wouldn’t be as appealing to Llanview’s latest gigolo. I wish the writers wouldn’t have ruined the character this way, darn it, because I liked Ford – and want to like him again – and would enjoy watching him with a woman who was out for the same thing… pure unadulterated sex, cause there’s nothing wrong with that! Oh, Langston, you poor sap… Ford has you right where he wants you. Let’s just hope Blair hasn’t given up on proving her point that the man is simply a dog.

What does everyone think of Hannah? She seems like a nice girl, as Starr stated last week, but I’m feeling a major conflict in the making here. With all of the crying going on at his apartment, it makes one wonder if Cole will take Hannah up on her offer to study at her dorms – a place she clearly teased they could have to themselves, since her roomie wasn’t there much. I look forward to what’s ahead because, really, if we’re just left to watch Starr and Cole raise Hope happily ever after, it’s going to be a boring road for these characters.

Many fans were upset that Melinda was the Cramer girl who died. I would have liked it to have been Cassie, like we were all led to believe, but can see why the writers killed off a character who we haven’t seen in years – it made the most sense and brought Kevin back to Llanview, which is always good. The scene with Adriana kissing Rex, not so much… I adore Melissa Fumero but hate what the writers did to her character. On to Kevin’s proposal… Kevin and Kelly used to be such a great couple, but I think too much has happened between them – and wouldn’t want to see them going down that road again. If I had my wish, Kevin would be back for good, running The Banner [Is the newspaper still in business?] as the exciting reporter he once was.

Schuyler is scrambling to come to terms with everything he’s done, Kim is seeing ghosts of strippers past and it appears Rex and Gigi are forming a united front. It was a nice touch throwing the dolls, Sierra and Rose, into the mix – probably one of the best emotional props I’ve seen on the show in a long time. We’ve seen some heated custody battles throughout the years, but I can promise you, this will be the mother of all battles – since so many people will be fighting for that precious, cute little baby. I must say, I’m happy that Kim was honest with Clint, in regards to her proposal, and Clint’s reaction to ‘everything Kim’ is making me like this character again.

Allison and her creepy grin are as crazy as ever. Again, with these types of storylines I would have liked to hear that Allison had woken from the coma, maybe escaped the special care facility, anything to lead us into the anticipation of her return. Even though the show always tries to be hush/hush with these returns, they couldn't be more obvious - so why not tease us a bit more with how they'll come to be. Sorry, you've caught me in a ranting mood today… Mitch had a ton of nerve asking Brody to help him get out of jail. I hate to say it, but as desperate as Brody is to get Jessica's memory back, I wouldn't be surprised if he did aid Mitch in his escape.

I was looking forward to the plot surrounding Jessica's new storyline, but the more she acts like a giddy high school girl, the more annoyed I become - even Langston and Starr don't act like that. Strike that, Langston is starting to… Any ways, in Jessica's defense… If my memory had been erased and the last thing I remembered was being with Cris Vega, just to find out it's thirteen years later and he's in love with someone else - because I cheated on him in high school - I'd be kicking myself too! The girl just has crappy luck… and I feel so bad for what's happened to Viki and Charlie.

Dani comes by her rebellion honestly - she's a Manning, after all - and Todd received an A+ from me for his performance at Llanview High. Was it a performance, did he stick up for his daughter just to gain brownie points? Or was Todd really being a supportive father? At this point, it doesn't matter. It was nice seeing a little glimpse of admiration in Dani's eyes, but we'd be gullible to believe that she's going to let Todd take her out for a sundae for stealing those test answers.

I bet you want to know what I think about Marty and the pregnancy test... Let's just say, I don't want to think about it!

What do you have to look forward to next week? Clint warns Kim that she'll be playing by his rules, but will Kim find his rules not to be worth the trouble? Natalie comes across a secret, one that may serve her well, but that's not all… Visit our OLTL Spoilers for more scoops - and to find out what Natalie uncovers!

Thanks for stopping by and be sure to leave me a comment. Don't forget to check out my Saturday Teaser Poll, surrounding who Todd approaches with an offer. If you're a fan who can't get enough of the various soap scoops, and want even more, follow Soaps.com's Editor-In-Chief on Twitter @soapoperafan and join Soaps.com on our official Facebook page for daily chatter, news and teasers. You can also catch me on Facebook, for everything One Life to Live!