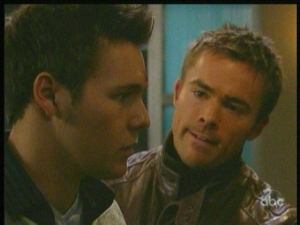 Admissions of guilt were in full force this week, along with undeniable feelings, secret visitors and another rockin performance by Snoop Dogg! We all watched how they went down, now let’s pick apart the episodes together. Hold on tight, it’s going to be a bumpy ride…

Well, the cat was finally let out of the bag… Gigi found out that Schuyler was Sierra Rose’s father – and Rex was the first to blame Schuyler for his and Gigi’s demise. I guess knowing that Schuyler really isn’t the father made the scenes that much more painful for me to watch. Schuyler was definitely wrong for lying to Gigi, but he really loves Gigi – and Scott Clifton did an amazing job projecting his character’s love and ultimate heartache.

The kids on the show act more like adults than some adults do. Shane was a real trooper when Rex broke the news that he wasn’t Sierra Rose’s father. I was impressed that Shane not only felt bad for the things he’d said about Stacy, and promised to be there for his new baby cousin, but also didn’t pull any punches by asking if Rex and Gigi were now going to get back together – since what tore them apart, Stacy’s pregnancy, was no longer a factor. Then there was Matthew… a healthy teenage boy who turned down sex with Dani. Matthew has grown up to be a very respectful and caring kid. There aren’t many boys his age who would have been able to control their raging hormones like he did.

Are any of you wondering why Fish is putting off a DNA test? I can see where he wouldn’t want to upset Gigi further, but when Stacy was pregnant, knowing the baby could be his, there were times when he insisted on being there to watch over her – now he’s ready to throw away any possibility that Sierra Rose could be his? I feel like Fish is reverting back to that scared state, when he wasn’t sure what would be acceptable to society. Good thing he has Kyle, who has taken matters into his own hands.

I’m getting bored already with Jessica’s memory loss. While my heart breaks for Brody, I’m eager to see if Cris will remain faithful to Layla or if his past feelings for Jessica will resurface. Either way, Jessica’s current state of mind will cause a roadblock for many.

I like seeing Todd creating more snappy headlines for The Sun, but I was a bit shocked that he went after Blair. I mean, didn’t he and Tea agree to take things slow with Dani, with hopes that one day they could all be a family? Props to Blair for refusing to be Todd’s blow-up doll and telling him to get his act together and move on. While the scene was fun, it wasn’t so much out of character for these two, but it didn’t seem to fit where the writers have been taking the storyline as of late. Forget Todd and Blair, writers, bring back Elijah in a towel!

Tea… Talk about a good friend to have. She's not only a savvy lawyer but one who would conceal evidence to protect a man she hardly knows. Sure, she's doing it because Rachel is worried about Schuyler, but again, this scene didn't sit well with me… not when Tea is working so hard to make things right between Todd and Dani. Would she really take the risk at this point? She did, but I don't think she would… if that makes sense. And Todd trying to pull the dad authority card out on Dani, refusing to let her go to the Snoop concert. Umm, Todd, did you really think that would help win Dani over? Not!

News came this week that actress Amanda Setton has decided not to re-sign with the show and will be moving back to California. Though I wish her the best, I'll admit, I'm upset that she'll be going. Her scenes aren’t only comical, they're sassy, emotional and bring out a part of Clint that actually had me enjoying the character for once in a very longtime. At least the show has offered to keep the door open, should Kim feel the need to return to Llanview one day.

Snoop Dogg's latest performance was amazing. I'm a big Snoop fan, so it was really cool to see him have more interaction with the characters this time. I have to admit though, some of the dancing going on during his performance gave me a chuckle… Let's just say Bo and Nora are better served to stick to ballroom and swing dancing! Hip-hop just didn't do it for them… I'll give Bo a break by saying that he seemed to be just 'jokingly getting down with the younger crowd', waving his hands in the air like he just didn't care, but Nora, she was really into it - or so she thought… too funny… and that's all I'll say.

While Langston was consumed with trying to come to terms with her feelings for Ford, Starr fought back the green monster - and the rest of the Cramer clan is about to receive some bad news… I'll leave it at that as not to spoil Monday's big twist. And wait until you hear what Allison has to say to Mitch!

What else do we have to look forward to next week? Dorian wants someone to prove that Mitch has been guilty, but will the messenger be able to keep a lid on everything he's done? While someone sets out to expose Ford, someone else spies on Jessica. That's not all… Visit our OLTL Spoilers for more scoops!

Have you seen the 37th Annual Daytime Emmy Pre-Nominations list that was released today? Be sure to check out the OLTL actor pre-nominees!

Thanks for stopping by and please leave me a comment and don't forget to check out my Saturday Teaser Poll, surrounding who will seek custody of Sierra Rose. If you're a fan who can't get enough of the various soap scoops, and want even more, follow Soaps.com's Editor-In-Chief on Twitter @soapoperafan and join Soaps.com on our official Facebook page for daily chatter, news and teasers. You can also catch me on Facebook, for everything One Life to Live!

One Life to Live's Tika Sumpter In...

Too Hot to Handle Plot-Blocks Another Batch of Overheated, Hook-Up Ready Hard Bodies in Season 2 Trailer