John and Natalie had to be the highlight of the week. Though Natalie thought John was Jared, it was apparent to me, seconds into the scene, that John was fighting something deeper than simply going along with Natalie to keep her alive. I'm not a big fan of flashbacks, but the writers hit the nail on the head in the ones shown, which displayed Natalie and John's emotional connection - even to those who weren't watching back then. The tension between these two is still very evident, and even though they are trying to deny these resurfacing feelings, I don't think they will simply go away - or will Marty's suspicions, considering how she found them in a lip-lock.

We all knew that Gigi didn't have it in her to leave Stacy in the cold. At first, I thought the writers were going to subject us to a quick reunion between these sisters, but I was glad to see their rivalry continue once Gigi got Stacy back to the cabin. Stacy was forced to depend on Gigi to deliver little Sierra Rose, who they did bond over, but the worst is yet to come with this storyline… I know Gigi was trying to help the baby, but I didn't quite understand the need for her to bring Sierra Rose out into the cold - and ultimately onto a cracking, frozen lake. I know I said this week was all about survival but there will be more to be had come Monday!

Are you curious to know what'll happen next week? While Marty is having a hard time dealing with the tension between her and John, she is shocked by her findings after diagnosing Jessica. Gigi gets bad news about the baby, and someone finally fesses up to their sins. Do you want to know who? Visit our Spoilers page to find out!

Thanks for stopping by and be sure to leave me a comment and don't forget to check out my Saturday Teaser Poll, surrounding who David and Kelly find. If you're a fan who can't get enough of the various soap scoops, and want even more, follow Soaps.com's Editor-In-Chief on Twitter @soapoperafan and join Soaps.com on our official Facebook page for daily chatter, news and teasers. You can also catch me on Facebook, for everything One Life to Live! 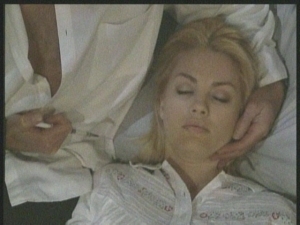 Credit: From days gone by... (Soaps.com)

This week was all about survival… John pretended to be Jared in order to keep Natalie awake. Ghosts from the past returned to try to save others from themselves, and though Jessica couldn’t save herself from Mitch, Brody was there to do it for her – too bad she didn’t remember her rescuer…

I can’t tell you how disgusted I was to see Mitch kissing Jessica. I think the writers would have been better off to leave the image of incest off screen, but when Brody busted through the door I sighed a huge relief. If I had to watch this sick father rape his daughter, in order to create ‘the chosen one’, I would have thrown up all over my keyboard. I felt so bad for Brody when he found out that Jessica had no memory of their love… However, Fish was my hero of the week when he appeared in time to save Brody by killing Nurse Charles. That robotic woman was getting on my last nerve!

I knew if anyone was going to save Dorian’s soul, who in turn set out to save Charlie’s, it would be Mel. When word came out that Mel was returning, I was hoping, since they had never found a body, that they would bring him back from the dead. He was such a good, solid character, who still had his flaws, but could always keep Dorian in line. Too bad she grabbed Charlie’s arm, which prevented her from killing Mitch for good – and ended up shooting Jessica. However, with Mitch’s latest threat to one of her Cramer girls, and Kelly and Adriana’s gift from a stranger in Paris, who knows which girl will be in danger next. At least Jessica is back in Llanview, where she can get the care she needs. A lot of fans have asked me if she’ll remember Brody soon, and though I can’t release all of the details yet, it’s going to be a very sad, confusing couple of months ahead for Mr. Lovett.

I thought Rex was going to kill Schuyler after finding out that he wasn’t Stacy’s baby daddy – and I think he would have if Fish hadn’t stopped him. Rex’s urgent need to get to Gigi makes me wonder if these two will be getting back together sooner than anyone thought. The key question here is… Will Gigi take him back?

I think throwing this ‘thought’ in here is so out of order, but again, this week we saw these random scenes in the mix with the much more exciting ones, so I guess it’s okay. Destiny and Dani as friends? I surely won’t miss Destiny’s whining over Matthew, but I think I like her and Dani better as enemies. Then again, I’m not much for these teen storylines to begin with… Todd and Tea… Their back and forth ‘do you love me enough’ scenes are getting stale quick. Either they move on as a couple, and work to help Dani accept Todd, or they don’t – get on with it! 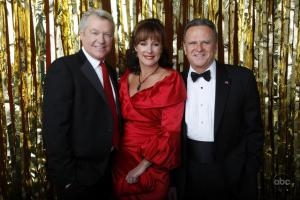