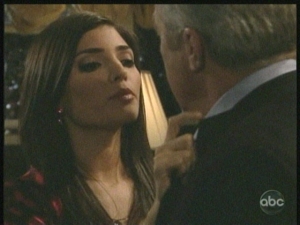 This week the latest kidnapping storyline was in full swing, and though many viewers didn’t want to go there again, it happened, and now Jessica is at the mercy of Mitch – and Llanview’s Police Commissioner has become the biggest joke yet – but let’s start off this end to the week on a lighter note…

Tuesday’s episode was kind of a relaxing treat. There was so much lovemaking to go around but too many interruptions prevented it. In some cases, it was for the best. Though I’m surprisingly enjoying Kim and Clint’s cowboy banter, I don’t need to see the sugar in bed with her daddy. At least Bo and Nora finally were able to consummate their reunion with a little love in the afternoon. It was as if Nora and Bo had never been apart. The couple reverted right back to their old ways… making love half dressed and enjoying takeout afterwards. There may not be room for a lot of alone time down at the Buchanan Ranch with Shane and Bree, but hopefully, when things return to normal in Llanview, we’ll get to see these two enter another dance contest down the road – then Bo and Nora will have come full circle.

Blair went above and beyond to protect Langston this week, by forcing herself on Ford in order to reveal that he’s really a player – and not a guy who’s simply head over heels in love with Langston. Remember, Blair’s not only willing to be a cougar to anyone who threatens her pack, but her claws have been known to slash a few unsuspecting males along the way, so watch out, Ford – I think Blair is a little too much for you to handle! Speaking of extended family members… Starr and Dani as sisters are perfect. Their interaction was real, emotional and mentally beneficial to both the Manning girls.

Natalie is one feisty cookie, and though I thought she was a bit harsh to Marty, I can see where Natalie got the idea that Marty was trying to send her a message – to stay away from John, who Marty appointed Natalie’s ‘phantom spouse’. I had to laugh because hasn’t John been Natalie’s phantom spouse for years? Through even their most connected moments John’s mind has never fully been in their relationship. However, I’m seeing a new spark to these two and loving it! Their scene on Wednesday when Marty caught them holding hands through the bars of his cell was priceless – for any Jolie fan. Sorry Marty, never liked you with John, never will… Phantom spouse or not, I foresee John and Natalie taking things to the next level and hopefully getting it right this time. And how about Brody today? He was definitely a man on a mission in the courtroom, and I have no doubt that he’d kill for Jessica. My hero! However, even though Brody shot John down, literally, I wouldn’t count John out just yet…

In case you're wondering where Mitch is holding Jessica, it's at a hidden observatory, buried deep within Llantano mountain. Seeing him drug Jessica, repeatedly, makes me sick and only reminds me of the last time he kidnapped her, dressed her in an old-fashioned nightgown and danced her into thinking he was her one and only daddy dearest. Sick, sick, sick, and now he wants Jessica to raise Rex's baby as her own, and forget about Bree? The whole storyline reminds me of a cult - Mitch's cult - and frankly, I can't wait until it's over. I found it humorous that Charlie would take time out for target practice. The way the writers have led up to him deciding to kill Mitch, you'd think he'd start turning over every rock to find him - yet he was one of the last people to know that Mitch had kidnapped Jessica.

Can I just say how disappointed I am in Schuyler for turning to the dark side in the name of love? Not only is he going to risk any chance of becoming a doctor, he's going to lose Gigi too. Once the truth comes out, and I guarantee it's going to come out with a bang, I foresee Rex and Gigi running back to each other - with no questions asked. It really stinks to watch things going this way, especially since I really like Gigi and Schuyler's chemistry, but I guess that's the price we pay for getting hooked on anything in soapland. How's the slogan go… The drama is always on!

Are you curious to know what'll happen next week, which starts the beginning of February Sweeps? While Jessica struggles to fight Mitch, he finds he has no further use for someone else. Dorian and Charlie come across a huge bump in the road, and many Llanview citizens are in danger in an area that was once a great escape for some relaxing downtime, but you'll have to check out the Spoilers page to find out, which includes some big February Sweeps teasers - and photos!

If you're a fan of Terrell Tilford (Greg Evans) be sure to check out part two of our interview where we talked about his upcoming Art Group Exhibition.

Thanks for stopping by and be sure to leave me a comment and don't forget to check out my Saturday Teaser Poll, surrounding who will come to John's rescue. If you're a fan who can't get enough of the various soap scoops, and want even more, follow Soaps.com's Editor-In-Chief on Twitter @soapoperafan and join Soaps.com on our official Facebook page for daily chatter, news and teasers. You can also catch me on Facebook, for everything One Life to Live!

One Life to Live's Terrell Tilford...