One Life to Live’s Terrell Tilford Chats With Soaps.com! 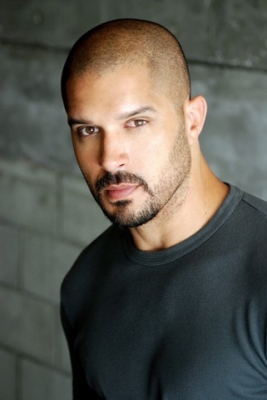 Soaps.com recently caught up with one of Llanview’s new fan favorites, One Life to Live’s Terrell Tilford (Dr. Greg Evans), about everything from how his storyline/character has evolved, what he’s liked most about Greg’s different façades and what’s to come for the big studio move.

If you weren’t aware, Terrell first started his Daytime career back in 1998 as Guiding Light’s David Grant, where he not only played the role until 2001 but met and fell in love with his wife, Victoria Platt. From there Terrell appeared in Days of Our Lives as Dr. Carrington in 2008 and had numerous film and Primetime roles in-between, playing a doctor. In terms of landing the various doctor roles, Terrell assured us he didn’t aim his auditions to specifically happen that way. “I didn’t set out for that but look for any role with truth to the character, where it’s real. I want to be able to connect with the material. Ron [Carlivati, Head Writer] and Frank [Valentini, Executive Producer] are very open people and have given me great stuff to work with. I’m very grateful.” Though many have thought that the role of Greg was never meant to be long-term, Terrell cleared the air about that rumor. “I had no idea. It was never presented to me that way.”

Now that we know there’s no end in sight, and hope to see Greg in Llanview for years to come, the character has evolved so much, and in so many different emotional ways… hotshot/playboy doctor, who blamed himself for his brother’s condition after performing surgery on Shaun (Sean Ringgold), then ultimately threw caution to the wind after finding love with Rachel (Daphnee Duplaix), the love of Shaun’s life. “It hit me all at once. As dark as it was, I really enjoyed the hospital scenes after Greg thought he botched up Shaun’s surgery, when others thought he simply did it to kill his brother, so he could have a clean inroad to Rachel. I liked living through the conflict of dealing with Shaun’s outcome, falling in love with Rachel and how it created a monster in Greg, knowing it was inappropriate to do so. However, I felt like the conflict was glossed over too quickly, with Shaun coming out of the coma so soon and being physically and mentally okay and would have liked to have seen the conflict built up between Greg and Shaun.”

Terrell has worked with various veteran show actors and not only did he express his gratitude for the opportunity but gave a little insight into how some of the actors are off-screen. “I’ve really enjoyed working with Hillary [B. Smith, Nora Buchanan] and Bob [Robert S. Woods, Bo Buchanan] because they’re these iconic, real people. They’re funny and sometimes have a really dark sense of humor. Bob’s so intriguing… He’ll show up to the studios in his short-sleeved shirt, shorts and flip-flops, and I ask if he’s lost – like he just came from some beach and made his way into the studios [laughs]. Hillary and Bob’s relationship off-screen are a lot like me and my wife’s. Hillary’s like this guiding force with Bob. He’ll be like, where are we supposed to be, reading what, and she’ll guide him to their position. It’s been a real treat to work with Jerry verDorn [Clint Buchanan] and Erika Slezak [Viki Banks], it’s such a highlight and honor for me to be part of such a history. I can’t imagine who I wouldn’t like working with. One good thing is not knowing, it’s part of the excitement, like being a fan and living through the storylines. I don’t know anything yet about what’s to come for Greg. I try not to have expectations, that enables me to enjoy the role that much more as the script unfolds.”

February Sweeps is right around the corner, and if you haven't heard, there's going to many lives in danger. Seeing that Greg Evans is practically the only doctor on call these days, will we be seeing him in the mix, tending to any patients in need? "All I'll say is… He'll be at the hospital waiting if anyone needs him."

The show's move to the old All My Children studios was big news last year, and we're happy to report the cast and crew will start making the move in a couple more weeks. Though we won't likely being seeing the show in High Definition, due to the economy and the costs it would impose on ABC, there will be a few perks for the actors - and the show as a whole. "The new studio will be 30% larger, freshly painted, better cameras and there'll be enough dressing rooms to go around for everyone. I'll have to travel a few more blocks down the hill, but I'd rather be trudging through the snow than walking into the unemployment line. I have a feeling a lot more actors will be looking for new bikes. That's what we'll be asking the studio for, a new bike rack." [Laughs]

With the studio move, and the recent As The World Turns Cancelled news, fans have been drawn into the rumor of a possible cancellation for our favorite ABC Daytime drama. Though One Life to Live will now be the only soap opera left in New York City, New York, Terrell gave us his stance on the show's future and how fans should look at it. "I see a very bright future for One Life to Live. I don't believe ABC/Disney would spend the money, and time, to make the move, which will benefit the show, then cancel it. People can either hold on to and celebrate in the show's victory or live in fear. Fans should enjoy the show and be part of the ride. Everyone gives their best to bring that to them."

Aside from watching Terrell continue to deliver great storylines, through Greg, he's getting ready to take part in this year's New York Marathon. "I ran in a marathon back in 2003 and always wanted to run in New York's. I'll begin weight training at the end of February/early March. With my wife in Los Angeles, I have to stay pretty active, and I hit the gym four or five times a week, doing everything from yoga, jump roping, weight training and strengthening exercises. I do a little bit of everything."

What do we have to look forward to from Terrell in the future? "I'm developing a webseries with two filmmakers [no specifics yet, but Soaps.com will keep fans posted], which we'll begin shooting at the end of March in Los Angeles. I just like to work… theater is my first love. I'd be on stage five to seven nights a week, if I could. That would be amazing, and I plan to look into getting back on stage."

If you've enjoyed our interview with Terrell, you may also like to read what his onscreen sister, Destiny Evans, had to say in Soaps.com Talks to One Life to Live's Shenell Edmonds!