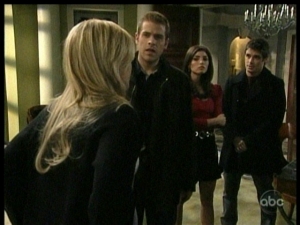 The pain is going to only get worse! (Soaps.com)

This week seemed to be all about help – and who was going to who for it! While some were shown the door, others agreed to even the craziest of plans, but did you think they were right to do so, or were their emotions so high they couldn’t make a conscious decision? Let’s take a tour of Llanview together and dissect the week’s turn of events…

Kim and Stacy continue to pull rabbits out of their hat, and it amazes me. Kim is smarter than what I initially gave her credit for, and Schuyler, he’s just the opposite – dumber than I ever imagined him to be, going along with this latest ruse to steal some drugs, which is the reason his mother allowed Todd to blackmail her, to cover for Schuyler’s past drug theft, which incidentally led to Dr. Joplin’s suicide, in order to induce Stacy’s labor – to keep the February 14 due date. Though Schuyler may be content to sit back and let the bobbsey twins run the show, the way Kyle went after Stacy and Kim, to defend Fish’s honor, was something that Kim and Stacy shouldn’t soon forget. Fish may have quieted Kyle down for the moment, but I don’t think it would take much for him to explode.

Dorian set out and made contact with a hitman, via Mel’s ‘sign’, and Charlie being in the emotional state he’s in, couldn’t help himself – and agreed to take down evil Mitch. Alcoholic or not, Charlie is a grieving father, and though I truly think he knows that Dorian is using him for her own self gain, and that Viki would never approve, his pain runs too deep and the only way he can unburden himself, and protect his family, so he believes, is to kill Mitch.

Roxy’s roadhouse food-slinging rampage was a bright spot to the week. Though many don’t take her seriously, and rightfully so, over the years, we’ve seen Roxy evolve from a woman out to land a pot of gold, at the cost of anyone, including her children, which she still considers Natalie to be. Roxy’s bombshell demeanor has always been my favorite trait, but when she shows us she has a heart, and will defend her family in even the craziest of ways, that makes her an even more appealing character in my eyes.

Starr and Cole may have been able to fight off Mitch at the coffeehouse, but now that Mitch has put his deadly plan into motion, I can promise you, February Sweeps are going to be like no other! Everything that happened in today's show, Brody almost killing Mitch, John getting arrested and Jessica finding herself faced with Mitch's nurse will cause a domino effect in the coming months - one that will involve half of Llanview - and one big hellacious explosion! I better stop before I give too much away…

We all knew it would be a happy reunion for Tea and Todd, but Dani, who's confused, did something any kid in this age of computers, from pre-school on up, would do in her place - when in doubt, Goggle - or in Llanview, call upon the Llannet Search Engine. Matthew was so sweet to rush to help Dani, and I have to say… Matthew has appeared to have grown up an awful lot over the past few months - his looks have matured so much that I think it's high time the writers incorporate him into a young love story, which we may just get between him and Dani. She's going to need all the support she can get - could it be possible that some of that will come from Starr, even more so than she's shown Dani now? I hope so… While I would've bet my life that the old Starr, pre-Hope, and Dani would've never gotten along, I think nuGrown-up Starr could be a comforting sounding board for Dani.

Blair and Todd are really growing on me as friends. If they can't be together, or even lovers, I'm glad to see them like this, rather than at each others' throat, and I think the writers had to finally make these two characters grow up in order to forward the storyline for Todd to have a chance at a second family, consisting of him, Tea and Dani. I was disappointed in Todd, though I realize he's desperate, for making light of the situation when he asked Marty for help. Blair and Elijah, and their sexting, is refreshing, and even though I'm a married woman, I recommend for everyone, age appropriate, married or not, to try it! Speaking of sex, Langston has quite the dilemma on her hands, admitting to Blair that she thinks of Ford while bedding Markko. Blair stepped in, like the cool mom she is, and talked to Langston like an adult, which I loved! So many parents would have shied away from the talk, but seeing as it's no secret that Langston and Markko have sex, and Dorian gave Langston her first fashionable Paris condoms, I think Blair gave her some great advice. Only thing is, I don't think Langston's mental partner-swapping days are over - especially after that kiss with Ford!

Are you curious to know what'll happen next week? Jessica's family sets out to find her, but will they even know where to start? Someone decides to stay quiet about Stacy and Schuyler's secret, but will someone else spill the beans anyway? A couple celebrates by making love, but you'll have to check out the Spoilers page to find out who - and to view some big February Sweeps teasers! If you haven't already, check out my interview with One Life to Live's Terrell Tilford.

Thanks for stopping by, be sure to leave me a comment and don't miss my Saturday Teaser Poll this weekend, surrounding Dorian. If you're a fan who can't get enough of the various soap scoops, and want even more, follow Soaps.com's Editor-In-Chief on Twitter @soapoperafan and join Soaps.com on our official Facebook page for daily chatter, news and teasers. You can also catch me on Twitter @AmyMistretta, for everything One Life to Live!

One Life to Live's Terrell Tilford...