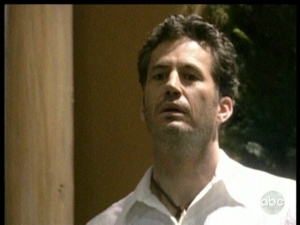 Last week was so full of drama, and this week didn’t have nearly as much, but there were surely some new developments that warrant talking about… Read on to see what jumped out at me and be sure to leave me your favorite moments below!

How many of you were jumping for joy when Ross showed up in Tahiti? If you’ve read my blog since he was presumed dead, you know I was thanking my lucky Tahitian stars when I saw him lurking outside of his old surfer hideaway… where it all began, where Blair Cramer first found Ross and lured him back to Llanview, where he and Tea first made a home with Dani… When Ross told Dani the truth, that he wasn’t her father, my heart broke for them both. If Ross had to be resurrected, just to leave the canvas again, I am so happy that the writers left him as the decent, caring person who I knew Ross could be. And yes, I’m still holding out hope for another return one day – heck, maybe I’ll make a pitstop to Llanview next Christmas, pick up Dani and take her to Tahiti to visit him!

John’s release from his short arrest has dealt the cards out for another dangerous game of cat and mouse. While I’m overjoyed by the reconnection between him and Natalie, I’m not looking forward to another hero on a mission storyline, like the recent one involving the drug ring, not to mention the one that took place in Napa Valley. I think it’s just too soon – and basically, aside from Mitch, we’re going to see a lot of the same players involved. Blah… Maybe I’m jumping the gun, so I’ll give it a bit more time to see if the writers can draw me in, not bore me out.

Mitch going to Todd for a favor was almost laughable. What was initially a fun character return is turning into an over the top circus. Mitch’s demands as of late are becoming a bit repetitive, and if you’re thinking along the same lines as me, wondering when this will all end, I can assure you… This is only the beginning. Everything Mitch is doing, or trying to control, is going to lead up to a ‘sweeps storyline’ like you wouldn’t believe. Now with Kyle having the ammunition that Rex is not Stacy’s baby-daddy, so many scenarios could unfold as a result of this secret – and what Kyle decides to do with it. At the rate things are going, Stacy’s February 14 due date is going to make for a Valentine’s Day from hell!

Who's really digging this Blair/Elijah paring? I'm enjoying her new independence, out from under the spell of Todd, which landed her on top of Lowell's desk this week - with the hunky Elijah on top of her! Not only did we get to see another heated scene between the newest Llanview sex addicts, David returned from London and demanded to know if Blair and Elijah were having sex on his Pa's desk! Gotta love me some David. I'm so pleased with the scenes between him and Bo, who appears to have accepted his long lost son with open arms. Though David was his corky self, while chasing the 'Ugly David' settlement, the way he put Dorian in her place, acting in a serious manner for once, balanced out this new Buchanan beautifully.

In the beginning of the week, Clint had proven once again to be the bitter child I've deemed him to be since way before he got burned by Nora. I don't know, I'm just not into Clint at all anymore. Maybe it's because I've always been used to the maturity of the character, and I hate seeing him acting like the scorned man that he is. I have to give Kim props… she's devious, but unlike Stacy, she is a hysterical, devious character and had me rolling when she threatened to throw Nigel and Renee in the same nursing home if they tried to stop her - or Clint from buying her whatever her heart desired - and held her own against David, who tried to rat her out to Uncle Clint. Believe it or not, by Wednesday, Clint managed to make me laugh as well, stating to Kim… "If I'm going to be the daddy then we need to talk about the sugar." At least Clint is aware of Kim's motives, but, you never know, we may have a case of 'the sugar daddy falls for the stripper' on our hands.

The kids in Llanview grew up a bit this week when they all decided to move in together - not necessarily as a group decision though. I can see why Starr, Cole and Hope would want to live together, to be a family, as well as why Markko and Langston would want to be together, to appease their raging hormones any time they like - not to mention that they really do care about each other - but this group under one roof is definitely going to have its challenges - if Markko and Langston don't get out of there quick. Speaking of roomies, Ford living over at Fish, Layla and Cris' should make for an interesting situation, especially if Langston and Markko luck out and do find another open apartment in that building. It seems this apartment complex, which also houses Rex's loft, is the new place to be!

Are you curious to know what'll happen next week? Kyle thinks he knows who the real father of Stacy's baby is, but will he have the courage to face the possibility? Someone returns to Llanview, will their return cause more issues? John takes the fall for someone, again, but you'll have to check out the Spoilers page to find out who!

Thanks for stopping by and be sure to leave me a comment about the show. Stay tuned for my Saturday Teaser Poll, about whose plea for help Marty turns down, and if you're a fan who can't get enough of the various soap scoops, and want even more, follow Soaps.com's Editor-In-Chief on Twitter @soapoperafan and join Soaps.com on our official Facebook page for daily chatter, news and teasers. You can also catch me on Twitter @AmyMistretta, for everything One Life to Live!

One Life to Live: Audrey Landers...