Soaps.com Talks To Melissa Fumero About One Life to Live Return! 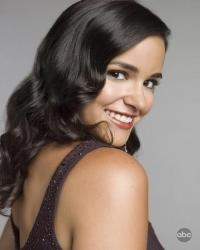 Yesterday, Soaps.com asked our readers to vote on which one of the Cramer Girls Returns would they like to see stay in Llanview long-term, and now we want to bring you what one of those girls, Melissa Fumero (Adriana Cramer) had to say about coming back to her One Life to Live role!

Many fans have been wondering what storyline Melissa will be involved in, specifically if she’ll be drawn back to Rex (John-Paul Lavoisier), now that he and Gigi (Farah Fath) are on the outs, so Melissa gave us a glimpse into what fans can expect come February… “I do have some scenes with Rex but I’m not involved in their story… Mostly I’m there for the Cramer reunion. It’s all about family in this short return, and I’ve had a blast!”

We can’t wait for this much anticipated reunion! Are you excited for Adriana to come home? What do you think she’ll have to say about what Dorian’s (Robin Strasser) been up to? Please share your thoughts with Soaps.com below!

One Life to Live: Andy Ridings As...