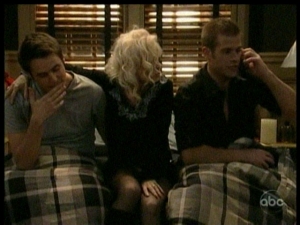 It’s nice to have things back to normal, no more pre-empts and plenty to talk about! I hope you all rang in the New Year right, so without waiting a moment longer let’s take a look at what 2010 brought to Llanview…

Good Ole’ Roxy… I was laughing my rear off when she strolled into Kyle’s room, climbed right into bed with the new lovebirds and began chatting about everything under the Llanview sun – and under Kyle and Fish’s sheets! Funniest line of the week, delivered during a very serious, and upsetting, scene for Roxy was… Roxy to Kyle, “You’re the gay son I never had.” I just love this character to death and would like to see her and David get in cahoots for a storyline – that would be the ultimate comical experience! You did hear that David will be returning to Llanview, right? Yep, come next week we’re going to see him come home and take on another snappy chic – Uncle Clint’s new stripper girl-toy.

Jessica and Natalie snapping at Nora, over her affair with Bo was a bit much. While I can see they were trying to defend their father’s honor, they’re all adults – and Nora and Bo’s love story of a lifetime shouldn’t be news to anyone in the entire Buchanan clan. It hasn’t been for years… David, who just realized he was a Buchanan, even remembered their strong connection. With all the drama going on in their lives, the whole scene made the twins look like a couple of bratty children. If anything, they should be keeping their eyes on Kim before she gets her claws into Daddy Dearest. Speaking of Bo… It was commendable that he tried to protect John and Natalie, after realizing there was more to Mitch’s stabbing than they had let on, and I have no doubt that John will keep his promise to Bo – to get to the bottom of Mitch’s involvement in the current police politics, but with Marty on John’s tail now, he’s going to have to face some emotional revelations of his own – concerning Natalie.

Even though Charlie took the ‘rather pushed leap’ – courtesy of Brody – and confessed his drinking to Viki, I think it’s going to take a lot more than Viki’s special touch to mother Charlie back on the wagon, especially with Mitch in town – and Dorian becoming more desperate by the second to get rid of him. It was nice to see Mel Hayes again, but unfortunately Dorian’s latest plans to ‘get rid’ of Mitch are sure to cause many unneeded consequences.

Poor Tea and Todd, just when they’re both finally on the same emotional page, they are forced apart. I enjoyed their goodbye scenes this week, as I did Dani and Matthew’s. Both were very touching, in their own different way, and they left the viewers with a hint at what’s to come… Tea and Dani may be in Tahiti now, but their unresolved ties to Llanview are sure to bring them back – and wait until they find out that Ross is alive!

Just when I thought Gigi and Schuyler were the hottest (once) non-couple to hit Daytime, Blair and Elijah go off and make me want more! These two are hot alone and even hotter together, and I hope we'll get to see more of their 'X-Rated Romper Room' scenes. During Wednesday's recap, I feared I'd need a cold shower right after writing it, but thankfully the soap world kept me busy throughout the rest of my work day! I was happy to see the writers utilize Renee in the scene, as her arrival to the disheveled hotel room, to check up on the noises reported coming from within, was hysterical.

The most awkward thing to happen this week was Shane catching his mother with her hand in the cookie jar. If memory serves me, he also caught Gigi and Rex in pretty much the same predicament, wrapped in blankets behind the couch at the carriage house, [Doesn't anyone take it to the next level and find a comfy bed anymore?] so that must have explained how he handled it so well. Sure, Shane was upset by the fact that his mother was doing more than just pondering away her time apart from Rex, but all in all I think the hardest part of dealing with the situation for Shane, aside from the obvious, was that he genuinely liked Schuyler - and that's why he didn't totally flip his lid. Hell, his, "I'll be waiting in the car!" sounded more to me like a very understanding, whooped spouse than a teenage boy who'd found his mother half-naked with someone other than his father. I did feel bad for Rex, and stopped to think about his question to Gigi - How could she throw away everything they had for one night in the sack with Schuyler - but the fact remains, this couple has 'had' issues for a long time, so while I think Gigi made the best choice for herself, I'm a little worried that the Mitch in Rex will come out during the fallout of their break-up, even though they ultimately decided against a custody suit.

Mitch the puppet master has been hard at work, and Dorian should have taken Viki up on her offer of help when she had the chance. If she thinks her girls are going to forgive her actions - by hiring the man, former Mayor Stanley Lowell, who almost got Starr and Hope killed - she's got another thing coming. I'm getting a bit bored with Dorian, period, as she seems to go from one grease-fire consumed frying pan to the other. And Rex may have stopped Mitch's latest ploy to kidnap Stacy, but I can promise you this will lead to much concern for Stacy and the baby - and a big revelation by one Llanview man will have him faced with a decision about what to do with his findings.

Last week I told everyone how happy I was with Ford's return, and I still am, but if there's one thing I can't stand, it's an insecure man - or in this case, Markko the boy-wonder. It's the biggest turnoff in the world. Come on, Markko, for the love of Langston, man up and act like you own it! I've always thought Langston was a bit mature for Markko, but he rescued her, in a sense, and she truly loves him. However, with feelings of love, comes lust, and nothing Starr and Cole can say will change the outcome of this delicious disaster in the making - It has to be Markko who puts on a secure strong front if he has any chance of keeping Langston's mind off of super sexy 'older' Ford.

If you think this week was crazy, wait until you hear what's in store for next week… Starr and Cole will take the next step to declare their independence, but will they have what it takes to make it work? Ross has a message for Dani, but will it put her over the edge? You'll have to check out the Spoilers page to find out!

Thanks for stopping by and be sure to leave me a comment about the show before you go. Stay tuned for my Saturday Teaser Poll, and if you're a fan who can't get enough of the various soap scoops, and want even more, follow Soaps.com's Editor-In-Chief on Twitter @soapoperafan and follow me on Twitter @AmyMistretta, as well, for everything One Life to Live!

One Life to Live's Nicholas...