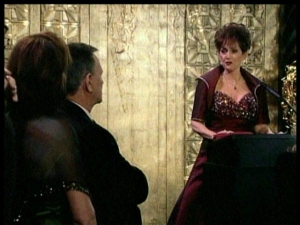 The writers bring sexy back! (Soaps.com)

It was another really short week in Llanview, but I hope you had a wonderful holiday and were able to get back into the swing of things with no trouble – and without having to make a lot of store returns! Reality has set in, as it has in Llanview as well, so let’s get on with my thoughts on this week – and why not start with the biggest bash of scandal…

The Mayoral Ball was a definite hoot and worked out almost too perfectly for Dorian and Clint. The only thing that bothered me was the Cheshire Cat smile plastered across Clint’s face, and wouldn’t you think that the press would not only be snapping photos at Bo and Nora’s reaction – but at Clint’s as well? In any case, Clint got his revenge, Dorian did Mitch’s dirty work, and Bo and Nora, even though they may not realize it, finally got ‘the out’ they were looking for. I have no doubt in my mind that Bo will find his way back into the Commissioner’s office – it seems to have a revolving door for Bo, like his son David’s door in and out of Llanview.

It’s a good thing that Gigi has a friend like Noelle to help her sort through her feelings. Noelle did exactly what I think Viki would have done – give Gigi advice that would be best for her, not for those around her. Though I am enjoying the courtship between Gigi and Schuyler, it saddens me to know that the lie between them will ultimately end anything they have going for each other. I can see it now, and this is just my presumption, not a spoiler… Gigi will decide to spend her life with Schuyler, the truth about Stacy’s baby will be revealed, and the fact that Schuyler knew about it, which will lead Gigi and Rex to a reunion. I guess if it does go down that way, it’ll be a type of poetic justice for Rex and Gigi.

I think Rex handled Mitch really well and was able to see for himself what a crazed madman Mitch really is. I’ll admit, even though many have warned Rex against Mitch, I was worried that Mitch would try to pull a fast one on Rex – and that Rex, who has always craved the knowledge of his real father, would fall for it. I think it’s safe to say that Rex made a very good first judgment, where Mitch is concerned, now if only he could see through Stacy’s scheme – maybe he would have a chance to save his family… Speaking of Stacy, we got a glimpse of confidence when she turned down Mitch’s offer after spending time with Rex, feeling the baby kick. Unfortunately, Stacy has no idea who she’s up against, in Mitch, but I’ll give her one thing… She knows how to prey on Rex’s vulnerable side, and I bet if things continue to go downhill for Rex and Gigi that Stacy could very well wrangle Rex back into her arms.

I had hoped that Todd and Blair would reunite, but given the past turn of events I think Todd’s place is indeed with Tea now. It has become apparent to me that Tea and Todd are not only permanently tied by a daughter, they have real feelings that bond them. I never doubted Tea’s, even though I did believe her feelings leaned more toward the obsessive kind, but Todd’s were always a bit up in the air for me. Blair is a strong woman, and she proved it by putting all of her feelings aside and urging Todd to follow his heart, which she now knows leads to Tea.

We don’t know much about Dani’s emotional past, other than she felt neglected by her mother, and apparently had a strong bond with the man who she thought was her father, but for her to snag a gun and take aim at Todd… I know she’s grieving Ross’ death, but I think Dani’s actions were a bit out of character for a girl who appeared to have a good head on her shoulders. I think her actions would have been more believable if the writers would’ve introduced her to us as a troublemaking rebellious kid. In the end, Tea’s promise to Dani, to stay away from Todd, will be interesting… Not only will we get the pleasure of watching Todd trying to sneak around to see Tea, we’ll get to see what the consequences of Tea’s actions will mean for Dani – if Tea can’t help herself and ends up being drawn back to Todd. Though I can’t spill the details yet, I can tease you with this… Tea and Todd will soon have some help, from a very unsuspecting source, when it comes to trying to get through to Dani…

The teen scene had a bit of drama this week after Destiny finally admitted her feelings to Matthew. I knew Matthew wouldn't romantically reciprocate them and, honestly, I wouldn't like to see Destiny and Matthew as anything other than best friends. Then there's Langston and Markko - and the return of super sexy Ford, who is going to be the true test for this couple. The show did a big service to fans bringing the character back to shake things up, and if Ford ever makes another trip to the Buchanan stables, to indulge in a bit of cooling off with a bucket of water, I'm there! However, it's not likely to happen anytime soon since it's winter in Llanview as well.

I'd like to end my blog today with a big, "Hell Yeah! In your face, Nick!" Finally, Kyle saw the light and realized what Nick was up to - and was able to rescue Fish's hurt feelings and let him know he's the only man for him. I hope these two savor in their New Year's Eve celebrations because, needless to say, Nick isn't going to be the last of their problems - but at least he is one less problem for this struggling couple in love.

Finally next week will bring us back to a full five days of new episodes, so what do we have to look forward to? Marty will make a point to confront John, Dorian realizes that she needs to get Mitch out of the picture, Stacy finds herself in danger and so much more, but you'll have to check out the Spoilers page to find out what January has in store for us!

Thanks for stopping by and be sure to leave me a comment about the show before you go off to ring in the New Year ahead. Stay tuned for my Saturday Teaser Poll, surrounding who Gigi will finally pick, next week, to spend her life with!

Have a Safe and Happy New Year's Eve! I plan to welcome in the New Year with friends and family and hope you have some awesome plans as well! I'll see you back here next Friday for another week's worth of Amy's "One Life In A Week" and look forward to sharing everything Llanview related in 2010 with you all!