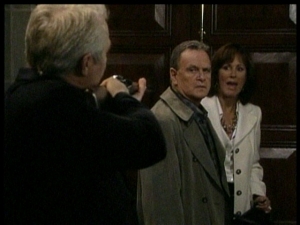 It was a really short week in Llanview, but there’s always excitement to be had – especially when a Buchanan unlocks their gun cabinet! Here’s a bit of what stood out for me this week…

I am so glad that this Bo/Nora/Clint mess is all out in the open. Clint was a bit over the top to take aim at his wife and brother, but I wouldn’t expect anything less from a scorned Buchanan man – and when Kim called and invited Clint to ease his sorrows at her place, I couldn’t help but laugh. Not because the idea of Clint running to Kim was a joke, but when did Rex’s loft become ‘her place’? I was very happy to see that Clint did his homework, after all, by doing a background check on Kim, and it was nice seeing Kim squirm a bit, wondering if she was going to lose her job. Props to the writers for redeeming what could have been a ridiculous pairing. And Matthew taking his first steps gave the family some much needed good news to counteract the mess that they are all finding themselves in this holiday season.

What do I have to say about Nick’s obvious ploy to break up Kyle and Fish… Not much, other than Nick’s scenes were unbearable to watch. Nick may have true feelings for Kyle, who already knows Nick wasn’t too happy about their break-up, but the way Nick is trying to manipulate the situation… I think he needs to go back to Llanview High, not as a substitute teacher again, but as a student – because he’s acting like a catty little teenage boy.

I’m not sure which was worse, Mitch suggesting that Dorian fire Bo, so he, or one of his minions, can take over as Commissioner, or him asking Stacy to give him her baby in exchange for Rex? In the end, Mitch came out on top… Though Stacy was clearly disturbed by the thought, she did appear to consider Mitch’s proposal, and Dorian, well, we all know how much she loves her Cramer girls – and the lengths she’ll go to protect them. The scene with Fish and Stacy outside of Mitch’s room was brilliant and tied in perfectly to what Mitch was saying to Fish – that he’ll never produce a child due to his sexuality. It’s very clear that Stacy’s baby is going to be a huge factor in this storyline! As an added note, I know there have been some rumors going around claiming that Roscoe Born (Mitch), whose return was never meant to be long-term, has been fired, but I talked to ABC, and they verified that Mitch’s storyline is just getting started and will go into February Sweeps.

The highlight of this week for me was Gigi and Schuyler's hot kiss, but I have to admit, I felt so bad for Rex when he came upon them decorating the tree. I am so torn on these couples… One minute I want Gigi and Rex to reignite their passion and spend their lives together, but in the next, I want to see where things could go with Gigi and Schuyler.

I think we've seen the last of Jared's ghost this week, when it became clear that Natalie wasn't left the gift, from Jared, that Nash left Jessica in death. I can't say I'm sad about it, because I'm an original John/Natalie fan, and I look forward to the road ahead of them.

To wrap up the holiday week, I'm sad to see Charlie continue on his downward spiral but am happy to see those around him trying to help him. Rachel and Greg making love… It's been a longtime coming - for us to finally see Rachel romantically connect with someone, and for us to see that Greg does have a monogamous bone in his body. The Manning/Cramer/Delgado clan… They are going to need more than just the holiday cheer to get them through what's ahead, but I look forward to it all unfolding - on so many different levels!

Though next week will be another three day week in Llanview, what do we have to look forward to? Clint aligns with someone unexpected, Todd makes a confession to Blair, and Kyle and Fish spend New Year's Eve together!

Thanks for stopping by and be sure to leave me a comment about the show before you head out to celebrate the holidays. If you haven't heard, Soaps.com now posts a new treat for our readers. Be sure to check the various News Rooms, each weekend, for our Saturday Teaser Polls, where we give you the chance to vote on what'll happen in a certain storyline set to take place the following week.

Again, I'll be posting my blog on Thursday next week, since the show won't be on next Thursday or Friday, so until then I'll see you for another partial week's worth of Amy's "One Life In A Week!"

Have a safe and happy holiday season!