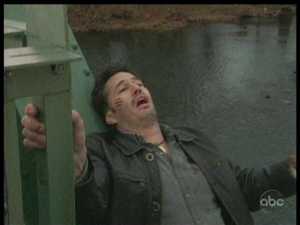 What a tough week in soapland it was for me … Not only am I grieving Ross, I’m grieving Ross. Wait, didn’t I say that already? Yep, looks like I did – and I just can’t help it because, yes, I’m still grieving Ross. I’m a huge fan of Michael Lowry’s, and I just wish the writers would have taken his character in another direction. At least they never found his body, so maybe he’ll return one day…Until then, time doesn’t stop for anyone, so let’s get on with my blog…

The location shoot, on the bridge, was executed perfectly. The excitement with not knowing what Ross would do next made up for Tea’s screaming, but in the end, it was Todd’s paternal attachment to Dani, and his need to try to comfort her, as only a father could, that had me wanting more. I’m so enjoying this side of Todd. I always knew it was there, and that he loved his kids, but he’s usually trying to scheme to get what he wants, or to get closer to them, so this is a breath of fresh air. However, just when Todd is ready to be and act like a real father, Dani wants nothing to do with him and, in fact, blames him for the death of the man she thinks was her father. Whew, things are a mess, aren’t they, but in this writer’s eyes, it’s just how I want to see this storyline play out from here… However, I would have liked for Todd to confide the truth to Starr – that she has a sister in Llanview. If you haven’t seen the new video promo for what Dani has planned for Todd, please view it in the OLTL News Room.

I can’t help saying this, but when Rex insisted that he and Gigi take a break from each other, did any of you think Gigi acted as though she was a child being punished rather than a woman who was losing the love of her life? Her actions only proved to me that although I have no doubt she loves Rex, Schuyler’s place in her life goes way beyond friendship. I already see Stacy’s wheels turning, and though Schuyler is a bit conflicted with his decision to keep the truth from Gigi, for numerous reasons, he’s going to be a major pawn in Stacy’s game to manipulate Rex further.

Clint finally got a clue and was given Bo and Nora’s heads on a platter by Neval. Everything about this storyline has me cracking up. I’m not a fan of Clint and Nora, but Clint is supposed to be a smart man, one who happens to have a family in crisis right now, and yet he stooped to Kim’s level and made it so Nora found him in bed with her? Give me a break. Though I’m not condoning Bo and Nora’s non-sexual affair, the whole scene with Clint and Kim was childish. As far as I’m concerned, Clint knew firsthand that Bo and Nora had the love story of a lifetime, so it shouldn’t be a big shocker to him that their bond over Matthew pulled them back together. To be fair, Bo and Nora should have been straight with Clint in the beginning, extenuating circumstances or not. In the end, I think everyone involved is going to be much happier, once the dust settles, then they’ll be ready to move on to the next rash of drama coming their way.

While I'm happy that John is fighting to protect Natalie from a life in prison, I enjoyed Brody standing up to John, as his 'almost' equal, and calling him out for what he was covering up. John was right to tell Mitch, that everyone would believe him over Mitch, but Brody struggling with his feelings to do the right thing, and Mitch pinpointing John as his attacker, this could turn bad in a heartbeat! Even if Brody stays quiet, and John refuses to play into Mitch's proposal, Mitch will always be a loose cannon - and John, Brody and Natalie will always be looking over their shoulder.

Charlie is getting really sloppy, but that's to be expected from an alcoholic. I hated that he lied to Viki, and it broke my heart to see that his heart was breaking as he did so - if that makes sense.

I'm glad to see that my previous dislike of Nick was warranted. I've never been a fan of this character, and what's even worse is that he's using his injuries from the attack, a hate crime attack, mind you, to get what he wants - Kyle! I hope that he doesn't succeed in sabotaging Fish and Kyle's newfound relationship. How's that old saying go… Once a snake, always a snake…Then there's Amelia and Delphina… Finally, someone has come back to reconnect with Amelia and get her out of Dorian's life - because Dorian posing as a lesbian is getting old quick. Does anyone wonder if Dorian's reference to Delphina channeling Mel will connect these two again, when the real Mel makes his return to Llanview? We still don't know if he'll be in spirit form, or if Mel is indeed alive - again, no body was found at the time of his death. In any case, with Mitch back in town Dorian is going to need a guardian angel - or a bodyguard - to protect her from not only Mitch but from those she wrongs in the process of trying to appease Mitch's threats!

So, with that said, what do we have to look forward to next week? Mitch will be throwing out more threats - go figure, someone else covers for Charlie, and Clint unleashes his fury on Bo and Nora! For more scoops, check out the OLTL Spoilers page.

Thanks for stopping by and be sure to leave me a comment about the show before you leave. If you haven't heard, Soaps.com now posts a new treat for our readers. Be sure to check the OLTL News Room, each weekend, for our Saturday Teaser Polls, where we give you the chance to vote on what'll happen in a certain storyline set to take place the following week.

Since next week ends with the Christmas Holiday, look for my blog on Thursday, Christmas Eve, when I'll see you for a partial week's worth of Amy's "One Life In A Week!"