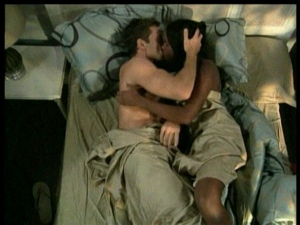 In my opinion, the writers have continued to deliver us excellent scenes, for the most part, for quite some time now, and this week was no exception – and it was also huge for casting news! Join me now, and please, do leave me your opinions below, while we take a trip through what stood out for me in Llanview and beyond…

There was a lot of romance that went on, and though Cris and Layla finally gave in to their passions and made love, Fish and Kyle were interrupted… I think, given Fish’s nervousness, that it was good that they were interrupted – and the fact that it was because of Nick will only test their love. I think this is something that the couple needs. Granted, it took them years to face the fact that they belonged together, but Fish said it himself, he didn’t know how to ‘come out’ publically, or how to be ‘half of a couple’, it’s best that they take things slow, as not to have Fish become too overwhelmed then do something that could ruin everything he and Kyle have fought for. I sympathize for Nick. No one should ever be attacked like that, for any reason, but I think Nick is going to depend on Kyle a lot in the coming months – and, in turn, come between Kyle and Fish.

It was strange watching the actor who played the biggest bully in the hate group, Donovan Patton, in the role of Dan, since he became a huge part of my household, through many mornings of watching him as the chipper, friendly Joe on Nickelodeon’s “Blue Clues” while my kids were little. When I heard he was going to be cast in the part, I was a bit worried that he wouldn’t fit the role, but he preformed realistically in the role of Llanview’s latest hate group leader – props to Donovan for proving to be an all-around actor in my book.

Rex and Gigi clearly aren’t what they used to be… Granted, it’s not by any fault of their own – not initially, anyway, but with all the outside forces trying to drag them down, and now with Mitch added to Rex’s emotional plate, and Gigi being hung up on Schuyler, I think the best thing for these two is to take some time away from each other to sort out their relationship. Unfortunately, Shane will suffer the most through this, but this situation isn’t getting any better – and now Stacy is at it again, stealing Mitch’s blood, it’s best to let the chips fall where they may.

Oh, how I wanted to turn the volume off on my computer first thing Monday when Tea was screaming for Ross not to take Dani away. Granted, she's a mother in distress, but that scream of hers gives me instant migraines. I was happy to see Blair's mother instincts kick in when she realized that Ross was planning on kidnapping Dani, but unfortunately her actions got Blair kidnapped herself. No matter how many tricks Blair has up her sleeve, to try to save her and Dani, we all know things are sure to turn anything but good… There'll be a big turn of events next week for the Rayburn/Delgado/Cramer/Manning clan.

I was so glad to see Greg put his mother in her place, after she practically demanded her grown son not have anything to do with Rachel. The woman was delusional to think Greg would turn his back on Rachel, but in the end, it was nice to see Mrs. Evans reach out to Rachel, for being the one who made Greg whole again, even if Rachel was still responsible for leaving her baby, Shaun, a heartbroken mess.

When it comes to Natalie, Kim has no idea who she is messing with. Natalie has always been a spitfire, that's why Jared nicknamed her Sparky, and the best scene of the week for me was when Natalie almost tore the stripper's head off at Buchanan Enterprises! I'm beginning to think I'm going to like seeing Kim try to weasel her way into the Buchanan fold - just for the pure satisfaction of watching them try to throw her out - but watching her try to seduce Neval into doing her dirty work… I can't believe I'm going to say this but it was comical, and I laughed out loud when Kim wondered to herself if Neval was indeed 'do-able'! On a lighter, more serious note, it broke my heart to see Natalie find the Christmas gift from Jared, but it ultimately sent her on a quest to seek justice for her husband's death. I have to say, whether it's legally, or morally, right or wrong, I was glad to see John cover for Natalie - it's what he does best, takes care of those he loves - yet I was equally glad that he didn't involve Brody in the cover-up.

Charlie keeps falling deeper and deeper into the bottle, but again, I think he's going to come out of this the best he can, with Viki by his side to help him. Viki said it best, on Wednesday, that she knows how it feels to lose a child - and she knows how easy it would be for Charlie to turn to booze. This couple completes the other, and that's what makes them a perfect match in my eyes.

So, with that said, what do we have to look forward to next week? Dani is going to be anything but forgiving to Todd and Tea, John will continue to do what he does best, and Nora comes across something shocking… For more sneak peeks into the future of Llanview, you'll have to visit the Spoilers Page and be sure to watch next week's video clip What's To Come!

Thanks for stopping by and be sure to leave me a comment about the show before you leave. If you're a fan who can't get enough of the various soap scoops, and want even more, follow Soaps.com's Editor-In-Chief on Twitter @soapoperafan and follow me on Twitter @AmyMistretta, as well, for everything One Life to Live!

One Life to Live's David Gregory...

One Life to Live Saturday Poll:...