One Life To Live: Is Crystal Hunt Leaving The Show? 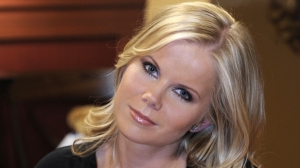 Again, the rumor mills were in overdrive this weekend and many fans want to know the facts surrounding the latest rumor claiming that One Life to Live’s Crystal Hunt has been let go in her role as Stacy Morasco, which she originated on February 6, 2009.

Soaps.com reached out to ABC, and a OLTL spokesperson gave us this statement…

“Crystal Hunt will be in a major story in the coming months as the story of Stacy and her baby builds to a climax. As far as any rumors that she is leaving the show, we do not comment on rumors.”

So, whether or not this major storyline will result in the character’s ultimate demise, we’ll have to watch and see! Until then, we’ll look forward the Crystal’s upcoming scenes!

One Life to Live Video: All-American...