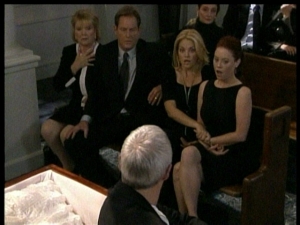 Coming off the relaxing Thanksgiving holiday, which I hope you had as well, it was nice to get back to work and into the excitement of Llanview. The week turned out to be mostly a Mitch-fest, but let’s take a look at what I enjoyed and what I completely despised…

Poor Jared couldn’t even be given a proper funeral, due to Mitch’s latest charade – and his diabolical display of jumping out of Jared’s casket! Here’s where the Mitch-fest began this week… Of course, I expected everyone to be completely traumatized by Mitch’s appearance, but the one part that stood out for me was right before John and Bo were taking Mitch away, when he stopped in front of Rex and instructed his new son that ‘they had work to do’. Chills crept up my spine at the thought of Mitch getting his hands on a new disciple, in this case, Rex. I was very happy to see that Brody was able to restrain himself against beating the hell out of the devil himself – pun intended! I like Brody as a cop and want him to stay that way.

Natalie broke my heart at the cemetery when she held the picture of the Texas Ranch, closed her eyes, laid against the coffin and told Jared she was going to picture him there, waiting for her to return home… Melissa Archer has done a fabulous job portraying a mourning widow. As for Charlie, though he knows that it was his drinking that initially caused a man to die, and Jared to keep his secret, which inadvertently contributed to the circumstances of Jared’s death, he wasn’t able to fight the bottle after his confrontation with Mitch. I feel for this character but hope, with Viki by his side, Charlie will once again be able to overcome his demons.

Kim preyed on Clint during his time of grief, and Stacy stupidly made a comment to Mitch’s photo saying how much she liked him already – for causing Rex to feel protective of her, because of the baby, which was the only reason. These two go from bad to worse, and I’m finding it painfully hard to even spare the time to comment on them at all – and I am sick to death of these near misses of Stacy being found out with her fake baby belly.

The scenes in London with David slipping up to Kevin about Bo and Nora’s affair led to not only Kevin choosing to keep their infidelity a secret, but it had the manservant in training, Neval, heading to Llanview to do the right thing – to keep the Buchanan loyalty intact. I’ve always been a huge fan of Nigel, and I have the same fanfare for Neval, as these two add so much character to the show! However, should Neval manage to reveal the secret to Clint, I’m sure Nigel will also have to teach him when to be loyal, in what circumstance and to who! Though it would help cushion the blow, for Clint, if Neval went to Nigel first, with the secret, so Nigel could handle the situation properly, I’d really like to see Neval try his hand at confronting Clint head-on with it.

Dorian was sworn in as mayor with a bang - and with a slam of a jail cell! The storyline just isn't doing a darn thing for me. How can viewers be expected to take such a serious subject as trying to legalize same sex marriages when Dorian has made a joke out of it from day one. At the risk of stating my political view, that I am all for the legalization of same sex marriages, as far as I'm concerned, Dorian could sit in jail for a month, and I could truly careless - she does nothing for me as mayor of Llanview. Unfortunately, after Mitch threatened her, we all know what's bound to happen next…

I'm definitely a hater of hate crimes, and find those who commit them to be cowards, but I was happy to see the show incorporate the scene with Nick at Rodi's because it does give the viewer a real picture of the sadness that does happen in this world on a daily basis - and hopefully makes those who have committed similar crimes stop and take another look at what they've done. Now that the crime has been committed, I hope the show carries it through and gives Nick, and those with his beliefs, the justice he deserves.

Dani rubbed Destiny the wrong way - in a big way - but being the loyal friend, she did as Matthew asked and covered for Dani - at first, by standing guard outside of Matthew's room. However, no one can deny that by her alerting Rachel and Greg to Dani's presence, Destiny will not give up on her quest to be Matthew's number one girl. I've never cared much for the younger storylines, but in this case, I look forward to seeing where things take these three.

Given that I'm not a big fan of Tea's tears, I surprisingly enjoyed the jail scene between Tea and Todd. She made some good points as to why she didn't immediately tell Todd the truth about Dani, and Todd made it darn clear that no matter what, he ultimately wished he'd had the chance to get to know his daughter. Not that I condone keeping a child away from their biological parent, but I can see why Tea did it, given Todd's track record as a parent. On the other hand, I can also see Todd's need to now get to know, and be a father to, his daughter. If you like immense drama, hang on to your hats because we are going to be in for a very bumpy ride with this storyline in the coming weeks!

So, there you have my take on things, and if you're wondering what's to come next week, there's plenty more revenge to be had, romance in the air and a hostage situation that will involve many!

Thanks for stopping by and be sure to leave me a comment about the show before you leave. If you're a fan who can't get enough of the various soap scoops, and want even more, follow Soaps.com's Editor-In-Chief on Twitter @soapoperafan and follow me on Twitter @AmyMistretta, as well, for everything One Life to Live!

One Life to Live: Stephen Markle...