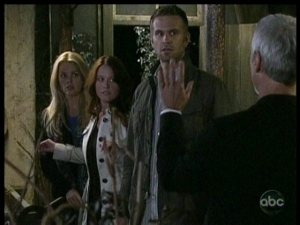 It’s Friday the 13th, and what a fitting, superstitious day it is to discuss all the craziness that made up this jam-packed week in Llanview, Napa, London and Michigan, and though I initially didn’t know where to dig in first, it’s only fitting that we start with what happened in Napa Valley, take a look at Mitch’s much anticipated return and dissect the happenings surrounding it!

I was a bit stunned by the skeletal remains of Nash – and very disappointed that they were shown. While I wasn’t against the digging up of Nash’s grave, and even the positioning of his remains in Napa, for Jessica to see, to show them took away from the scene for me. First of all, the remains made it appear as though Nash died and was buried with a permanent scream on his face, which wasn’t the case at all. It was a bit ‘propy’, as though the show borrowed the remains from some cheesy horror flick, and unreal for me, even though it could be possible that Mitch went the extra mile to open the mouth of Nash’s corpse and have him appear to be screaming from the grave. To wrap it up, the show, which has always displayed real life drama, aside from its special fantasy storylines, would have covered more ground in this viewer’s eye if they hadn’t shown the corpse and simply allowed us to imagine it through Jessica’s horrific emotions.

Not only did Mitch come back from the dead, but he’s Rex’s father! The man is certifiable, but I love the character! Why, you ask? Well, Mitch’s return is going to have a huge domino effect… He’s already traumatized Jessica in numerous ways, revealed Charlie’s secret, which led to Jared’s role in his plan, destroyed Natalie by killing Jared, got back at John by pulling one over on him, the list goes on and on, and the fallout from everything is going to take a very long time to rebuild.

The scenes in London reminded me of scrambled eggs… everyone was thrown into the mix, where Nora, Bo and Clint found out Tea had a daughter, Matthew and Dani realized the other’s connection to Tea, David decided to stay in London and Destiny headed back home – just rethinking about the episode makes my head spin. However, this fast pace is what keeps things moving on. The only complaint I have is that we’re going to be subjected to Nora and Bo keeping their secret a bit longer, which stinks because that’s one secret I can’t wait for to come out.

Speaking of fast pace, Matthew made his way to Seattle, and if the show had to bring another long lost child into the mix, I’m darn glad they cast Kelley Massal to play Dani – what a great addition to the show! She’s an awesome friend to Matthew, a daughter Tea felt as though she had to hide, one who Blair is trying to keep from Todd and the very person who has turned Ross’ emotions upside-down…

Oh, how I hate that Ross has been turned back into this horrible guy - were the writers trying to imply that he was going to rape Blair? It looked that way to me and made me sick. I haven't liked a character like Ross in so long, and am a huge fan of Michael Lowry's, so I guess I'm a bit bias - but it still stinks. The way things are going, I can't see Ross staying in Llanview for very much longer, but if you happen to be in the Manhattan area you just might find me scanning the local nightlife to catch one of Michael's DDC gigs!

Then there was Marcie, being the dutiful friend, trying to create a distraction in order to allow Nora and Bo the chance to stop their son from having the life-threatening surgery, which in turn caused real contractions and ultimately the birth of Marcie and Michael's baby boy. I was thrilled with the way they tied Michael and Marcie into this storyline!

If I didn't respect him enough already, Schuyler has officially become my hero after resisting Gigi. It's a sure way to separate the good and bad guys, most of the time, and though I wouldn't have faulted him, or considered Schuyler a total loser, had he slept with Gigi, in the end, he did the right thing - the most unselfish thing he could have done… not sleep with the woman he loves. Sure, Gigi mostly likely would have regretted it, but Schuyler was there to make sure she had a conscious choice, while protecting his heart as well. [Sigh… what a guy!]

Things appeared to finally become clear in the Williamson/Vega/Fish household, and even though I'm not a fan of Cris and Layla, as a couple, I'm looking forward to Kyle and Fish reconnecting and discovering each other again - and am very happy that they didn't jump right into the sack. Their issues have always been over Fish's reluctance to come out, it's going to be interesting to see how their everyday lives and problems have an impact on their relationship, and for all of you Kish fans out there, the holidays are promising to be big for this much anticipated couple!

Are any of you waiting on pins and needles for Llanview to announce who's going to be mayor? Good thing this race is fictional because if The People were made to wait this long, in the real world, there would definitely be a political uproar! For fun though, the majority, over 80% of you, voted in last week's homepage poll that you'd want Viki as mayor, so I guess we'll have to wait until Monday to see who won!

I have to tease you a bit before I go. There's going to be a big storyline coming up in December, so be sure to visit the News Room for all of the details surrounding this!

That about wraps up my thoughts for the week, but you can bet the storyline dynamics, or lack thereof, will be spilling over into next week, which will give me plenty to present to you then! If there was anything that I didn't touch base on, that stood out for you, please leave me your thoughts below. Thanks for stopping by, and if you're a fan who can't get enough soap scoops and want even more? Follow Soaps.com's Editor-In-Chief on Twitter @soapoperafan and add me on Facebook!

One Life to Live's James DePaiva In...

One Life to Live Poll: Charlie's...