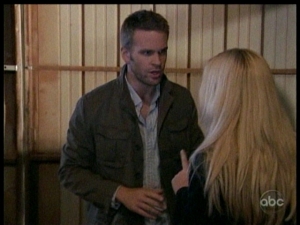 A lot of things jumped out at me this week, most I was pleased with, yet there were other things that irritated me to the bone. Though lately I’ve been in a ranting mood, today I have a lot to rave about, and I’d love to hear what you think about what I’ve picked apart in Llanview below!

Since everyone knows that Mitch is returning from the dead, I can now elaborate a bit on some of the things that unfolded this week… It appears that Mitch has reverted back to his old ministry days, where he preyed upon women and brainwashed them into doing his dirty work. How convenient was it that Brody and Rex grew up together, in the same neighborhood, but never knew each other, yet Mitch, who appears to be behind this craziness to get Jessica and Natalie alone, was able to use Corrine and Nadine to aid him in his mission. I do think Brody could’ve struggled a bit more, while tied to the chair, having been a Navy Seal, but all in all I like how the story is beginning to unfold – and, of course, with John on the case, we knew Brody would be rescued sooner or later. For those who haven’t watched the new November Sweeps video clip, you’ll want to check that out in the News Room, as I can promise you the best is yet to come next week, things we’ve all been anticipating for months… Rex finds out who his father is, Nash’s remains are discovered, and everyone in Napa is about to meet the person behind all of the sabotaging – and it will finally be revealed how John Brotherton (Jared) will be leaving the show…

Now that the commitment ceremony is finally over I can honestly say that the highlight of the event for me was, of course, Kyle refusing to commit to Creepy Nick and finally deciding to throw caution to the wind and profess his love to Fish. However, when Roxy kissed that mouthy, annoying protester woman, saying, “Don’t knock it till you try it,” it was true Roxy form and a great addition to the scene!

It’s hard to believe it’s been a year since the whole baby switch storyline began, and for all of you Marcie fans out there wasn’t it nice how the show tied in not only the fact that Hope’s a year old, but Marcie and Viki came together to remember Chloe as well – and the fact that a year later, Marcie and Michael are on their way to becoming parents. Speaking of which, look for Michael to show up next week!

Rachel let Shaun down easy, until he found out the truth about her and Greg, and I’m so happy the writers aren’t going to summit us to watching Rachel and Greg go behind Shaun’s back in order not to hurt him and therefore drag this storyline out for months. Does anyone else think it’s still a bit weird that Shaun is claiming to have loved Rachel? Again, I can see his upset at finding his brother kissing her but all this ‘I loved you’ talk is a bit much, as they never even had a chance to explore their relationship. It was nice to see Greg refuse a woman, for once, and not give in to Viv’s seductive foreplay – in the name of falling for Rachel. This is one couple who I absolutely despised and now label as one of my current favorites – great job, writers!

On the other hand, I’m pretty upset with the direction they are taking Ross, who appeared to have changed a bit since his earlier Llanview days. This guy was an instant fan favorite and to make him some crazed lunatic who has the capability to kill, and do who knows what else, it down right stinks. I’m hoping that the writers start to portray Ross as a father who wants another chance with his daughter – not some half-cocked deadbeat dad.

Just when I thought the show couldn't have a character stranger than the loyal Buchanan manservant, Nigel, they threw his lookalike cousin, Neval, into the mix! Props to the writers for using more of Peter Bartlett! Not only is he a veteran recurring actor of the show, his character is filled with wit, charm and a bit of sassiness that makes him unique. I wish he and Roxy would get back together because I don't think there is a better suited mate for either one of them!

I enjoyed the coming together of Bo and Nora - minus the fact that she's still married to Clint. It was great that Nora didn't just throw herself into Bo's arms, as she's wanted to for years, and forced him to address the forgiveness she has longed for - the forgiveness he has blatantly denied her. I thought it was ridiculous to have Kim go after Bo and think it's just as bad that she's now going to go after Clint. With that being said, and the fact that Clint is about ready to get his heart broken, Kim may just strike Buchanan gold - if Clint's vulnerable enough. If this happens, I'm not looking forward to any future romantic scenes between these two… However, Gigi, who Kim and Stacy have been tormenting for weeks, is finally cracking and turned to the bottle to soothe feelings of betrayal and abandonment. How many of you are hoping that Schuyler helps her out a bit and eases some of that pain away? You all know where I stand on this issue!

I'm not one to promote mouthiness from a kid toward their parents, but, wow, did Dani ever let Tea have it - and I have to admit I was silently patting her on the back! Like Jack, Dani comes by it honestly, with having Tea for a mother, who's stashed her away, and Todd for a father, even if she doesn't know whose jeans she's carrying. Destiny and Matthew's goodbye was sweet, but I'm starting to agree with many posters who think the lengths that Destiny has gone to, in the name of friendship, is a bit unrealistic. It would be one thing to head to another state to locate him but to travel to London, while claiming to be on a school trip, then to force herself on Bo and Nora… very brave, commendable and heartfelt - just too in-your-face for me and again, bordering on the unrealistic side of things.

That about sums up everything that stood out for me this week! Thanks for stopping by, and please feel free to vote in my new poll about the changes in Ross. If you want more soap scoops, follow Soaps.com's Editor-In-Chief on Twitter @soapoperafan and add me on Facebook!