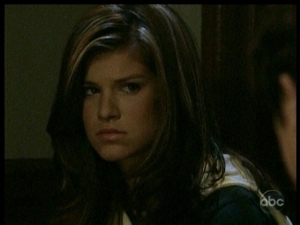 Who's toying with Jessica? (Soaps.com)

What a cute addition to the show Dani is, anyone agree? I loved it when she so innocently listened to Matthew’s troubles then tried to contact her mom, the lawyer, who she labeled a ‘real shark’, to help him… if only Dani knew that her mother, Tea, already helped Matthew – and was fired by him as well! I can tell you that Dani won’t stop on her quest to help Matthew, and it’s going to be very entertaining indeed… And now with Ross racing off to London, Tea won’t be far behind, as well as Destiny and David, which makes me happy – anything to get David away from Dorian and her masquerade, which jumps into high gear next week!

We knew the kiss between Nora and Bo was bound to replay itself, sooner or later, and I am so happy that these two are finally forced to face their past feelings. There’s still a long road ahead for them, involving Matthew, and I’m looking forward to seeing what path they’ll ultimately take for their future together as a couple – and how Clint will react to his wife and brother’s issues.

By Ross going along with Tea, and walking away from Blair, after finding Todd in Blair’s bedroom, proved to me that his first priority is not to woo Blair but to find his daughter. One thing that was a bit confusing for me… After they’d left Todd and Blair upstairs, Ross made a point to remind Tea that Todd still didn’t know about Dani. If Ross was sure that Dani was his, why would it matter if Todd knew about his daughter with Tea? At first I thought maybe Ross was aware that Dani was really Todd’s, but after thinking the scene through, I think Ross just said that to comfort Tea, in some small way, meaning since Todd didn’t know about their daughter, there could still be a chance for Tea and Todd, as well as for Ross and Blair.

The scenes with Fish and Cris were a hoot. I think Cris put his shirt on, when Fish came home, thinking his shirtlessness would make Fish feel uncomfortable, but when Fish said, “Cris, don’t worry, you’re not really my type,” I laughed out loud. Aside from Langston, Markko, Starr and Cole, there really aren’t many ‘true friends’ in Llanview, so it’s really nice to see Cris, Fish and Layla pulling together to support each other – I just wish Cris and Layla didn’t have their own issues. I really don’t have much invested in Layla’s character, but I always have in Cris’. I want so much for him to fall head over heels for someone without a bunch of drama and baggage in the mix. He’s never had luck in the women department, and I’d like to see things change for this character.

Props to Fish for finally standing up for himself and his rights – and believing in the man he is! I can’t wait until next week and can promise that the rally is going to change many lives.

How cheesy was it for the writers to use a voice, one the viewers could clearly hear was not Nash? Totally ridiculous, and for me, it blew the whole suspense factor of the storyline straight to you know where. If they couldn't have lured Forbes March back, who's taped his last scenes with As The World Turns, to do a five second voiceover, why not keep the voice out of the listener's reach? However, I guess if we've had to endure past recasts, the use of a fake character's voice shouldn't be so bad - but it was for this Nash fan.

After all of the fantasizing that went on Tuesday, my mind was in shambles by the end of the episode. Since I now know who's behind the phone calls to Jessica, it's hard for me, without giving anything away, to talk about all of the wild goose chases that took place this week. By the way, if you want to know the scoop, be sure to visit the spoilers page. One thing I will comment on is the person who is behind this riveting storyline is very, very resourceful by involving everyone from the man at the motel, who sent Natalie and Rex to Napa, to Nadine Lovett, who drugged Brody in order for 'this person' to be able to manipulate Jessica into going to Napa too. Does this mean that Jared is working for them? Not necessarily, as that's still yet to be determined… Don't count Jared out yet, we haven't seen the last of him!

Halloween was in the air, and it didn't surprise me to see the Manning clan trying to take over the festivities. How funny was it to see Shane request that Schuyler conveniently take his father's place - thinking, "Dad's going to love this," while taking a picture of the three of them in costume. Sorry Shane, again, your parents are keeping you in the dark and your dad is not going to think too kindly of Batman (Schuyler) joining his Cat Women (Gigi) and Robin (Shane), especially if he finds out that Schuyler kissed Gigi, again, and that Gigi admitted that she had feelings for Schuyler! It doesn't take a crystal ball to see things getting more complicated for these two, and I say, "Bring it on!"

Thanks for stopping by again this week! Please feel free to vote in my new Cris and Layla poll. Since some didn't agree with my perception of them as a couple last week, I'd like to know what the majority thinks - and don't forget to share all of your One Life thoughts below. If you want more soap scoops, follow Soaps.com's Editor-In-Chief on Twitter @soapoperafan and add me on Facebook!
[crowdsignal poll=2174333]
On Cris and Layla as a couple…(opinion)

Do you have any fun plans for tomorrow? I'll be heading to a party, but I hope you all have a Happy and Safe Halloween! I'll see you back here next Friday for another week's worth of Amy's "One Life In A Week!"

One Life to Live: Bree Williamson's...