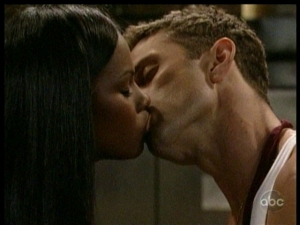 "Keep your hands to yourself!" (Soaps.com)

Cris finally took the step and planted a wet one on Layla this week. As I stated before, I’m not really feeling these two as a couple and the kiss didn’t change my mind at all. Unfortunately, I don’t think we’ve seen the last of this non-couple in distress… Being that they are still roommates, and two friends trying to support Fish, they are bound to give in to their desires in the near future.

Pamela Stuart showed up dead, and now Jared’s missing, but we are all left with one big question, “Whodunit?” and where the heck is Jared? I still don’t think that Jared is a murderer, and it’s a gimme that whoever is behind the mysterious text messages to Jared is the big boy, or girl, in charge – and I’m not talking about Pamela Stuart. The web the writers have weaved is still so tangled, can we really be sure who this mysterious person is? Mitch, Allison, Carlo, or even Spencer? Your guess is as good as mine, so please leave them below! As far as Jessica hearing the voice of Nash, we all know that voices can be altered, or incorporated from a past recording, so whoever is taunting Llanview has some technical genius on their side – I wish it really was Nash, but sadly, he’s dead and gone… And what’s with Brody’s sister calling him out of the blue? Could it be that someone has set it up so Jessica is alone in Llanview without her protector? At this point, anything is possible.

Kevin came back into the picture this week, and boy have I missed Dan Gauthier. I’m just sorry that we didn’t get to see him as long as we’d liked, and hope by the time Kelly makes her way back to Llanview in 2010 that the writers will change their minds and bring Kevin back with her. I’ll be interested to see how things go for Matthew at boarding school, especially now that we know Tea’s child also attends the same school. Back in Llanview, I don’t think Destiny is going to give up on reaching Matthew and we may just see her finding a way to get to London. She’s already voiced her worries to David, who does indeed have access to the Buchanan jet…

Dorian and this whole mass gay wedding plan… So far, the storyline is still boring me, and Nick is just downright creeping me out – not a fan, and I think the writers need to pull Kyle and Fish more into the mix. What did you think of Dorian’s last indulgence as a single straight woman – when she gave in to David’s kiss? David and Dorian were always a fun couple, but I really wouldn’t want them together again. As I said before, I loved the days when David and Kelly threw caution to the wind and would love to see them hook back up when she comes to town – if David is still in Llanview…

Were you as shocked as I was to see Greg's mother slap him across the face, in public, and demand that he leave Shaun's girlfriend alone? I was like, "Holy Wow, are you kidding me?" Okay, before I continue on my rant, I will officially admit, yes, the writers did their job, changed my mind and pulled me in… I am now rooting for Rachel and Greg as a couple, but back to the topic at hand… First of all, Greg is a grown man, one who has outgrown spankings from his mommy, and second, Shaun is a grown man, one who hasn't even had a real date with Rachel, who he's publically professed to be totally in love with, which would have had me running for the hills if I were Rachel - bottom line, yes, Mrs. Evans is right, Shaun's heart is going to be broken - something we determined was bound to happen long ago - but these brothers need to face this, as well as their past issues, head on, so Mrs. Evans, "Keep your hands to yourself!"

Just when Gigi and Rex made one step forward to healing their relationship, outside forces set up a roadblock. I have no doubt that Rex wants to save their relationship, but I can see why he'd want to help Natalie find Jared - and be involved in Llanview's latest investigation - and Schuyler, being the dutiful friend, one who happens to be in love with Gigi, was there to comfort her rejection. I think this is going to be the turning point for these two, and Gigi is going to have a hard time putting all of her focus back onto Rex, as thoughts of Schuyler are bound to cloud her mind. It's been nice not seeing Stacy much, and now with Kim having a plan of her own - to sang herself a rich Buchanan sugar daddy, Stacy may just be on her own for a while. I can see Kim going after David, to fulfill her needs, but Bo? I just can't fathom it. It's too outlandish for me to buy into, being that Bo's a smart man and knows the depths of deception that have been caused at the hands of Stacy and her stripper friend.

Here's the Blair we know and love, armed with a new plot - and forcing Marty right into it! Though we all know Marty's feelings toward Todd (or do we?), it was clear that Miss Righteous wanted to do the right thing and tell Todd the truth, but when in doubt, threaten your doctor with the old 'doctor/patient confidentially clause'! Blair is playing with fire by keeping this secret from Todd, but we've been down that road before and already know how things will end - at least we have little Jack Manning to keep things fresh… He's a chip off the old block and so much like Starr used to be at his age. I do want Todd and Blair back together but am looking forward to the tensions that have shifted from a threesome, to include Blair, Todd and Tea, to the foursome of Ross, Blair, Todd and Tea.

What do you get when you add a hot surfer bum to an educated, but equally hot lawyer? The brothers Rayburn/Clarke! But, which is their last name, Rayburn or Clarke? In any case, it's neither here nor there, but one thing's for sure, there's going to be no stopping these two on their quest to locate Tea's child - and I look forward to ogling over them, I mean, watching them, on their journey to find the missing girl - who we now know is Danielle, the girl at Matthew's boarding school! If we're to believe what Tea confided in Rachel, that her child is indeed Todd's, everyone involved is in for a very bumpy ride!

Thanks for stopping by again this week! Please feel free to vote in my new Todd and Blair poll and share your thoughts on the show's storylines below. If you want more soap scoops, follow Soaps.com's Editor-In-Chief on Twitter @soapoperafan and add me on Facebook!

One Life to Live's Florencia Lozano...

One Life to Live's A Martinez In...