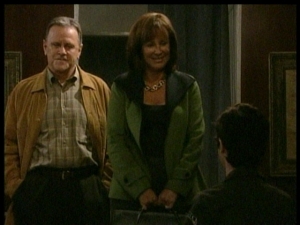 I couldn’t have been happier when Nora begged Greg to operate on Matthew – something she fought hard against but now felt she had no choice but to fight for. Rachel’s plea, on the other hand, was a bit weird… To ask Greg to assist in Matthew’s surgery for her, I could see – that would work since they are both evidently attracted to each other, but to imply that Greg do it for Shaun? Why? Because Shaun’s in love with Rachel or to right a wrong and prove to himself that just because Greg couldn’t help his brother maybe he could help Matthew? In any case, Greg fell for it, Shaun ended up coming out of the coma, and just when everyone was about to get what they’d asked for, Bo and Nora went and hijacked Matthew! As this storyline plays out, another huge revelation will unfold, which will have nothing to do with Matthew at all…

It was nice seeing Noelle back in the game this week, must be Moe is still in Texas and she’s filling in for him in the Manning kitchen, and as Super Nanny, etc. I bet she didn’t plan on having to threaten a hot burglar with a rolling-pin – good thing Jack was there to stop Ross in his tracks because we know there’s one thing Noelle likes more than pies – gossip, and I bet Ross could have squirmed his way out of Todd’s with Tea’s briefcase after spilling a few stories her way – and batting those delicious eyes of his at her. Moe is like Apple pie, everyone likes it, but Ross is like blueberry cheese cake, a sweet taste that is desired by many!

Blair conveniently lost her memory, but that’s okay with me, why? Because I think if Blair is the one to tell Todd the truth Todd may resent her – and I want these two back together, fighting together and raising their family together. On that note, I was impressed with the exchange between Tea and Todd, and though they had many accusations to throw at each other, in the end Todd admitted that he wanted her to give him a reason to fight for them. So, my question is, did Tea walk away, so she could keep her child a secret or has she finally had enough? I’m guessing the first reason. How sweet was Ross to bust out of custody just to make sure Blair was okay? I laughed the whole way through him taunting Fish, like any tough guy would, then wanted to clap ‘bravo’ when Fish had finally had enough and tasered him – not that I liked watching my sexy surfer flopping around on the floor like a Fish, no pun intended.

Are you all seeing what I'm seeing? Look to the left… do you see that look in Natalie's eyes, the one she always had back in the day when she was fighting against John for the sake of another husband - Cristian? I'm eagerly rubbing my hands together with anticipation… John can lock Marty's office door, quiet her with sex and minimize her calling him out on his connection to Natalie all he wants, but as far as I'm concerned, John and Natalie had more chemistry in that one scene, pictured to the left, than Marty and John could ever have - period - and that says a lot.

I suppose we should touch base on Jared, since I seem to have written him out of the picture already, sorry John Brotherton, I will miss you dearly, but the fact of the matter is Jared is leaving, but how will he go? He finally confessed to Natalie that he's been working with Wayne Landers, but I'm definitely not sold on any possibly that Jared was the one to kill him. Someone is obviously pulling Jared's strings, so any thoughts on who it could be? With Roscoe Born returning as Mitch, that's where I'm going to place my bets. However, could it be that Allison Perkins has come out of the coma and is putting in motion a way to reveal her big secret? Feel free to leave me your thoughts on this.

Gigi did the right thing and admitted to Rex that she was unsure of her true feelings for Schuyler - or more to the point, why she felt she needed to be around him, due to the situation with Stacy carrying Rex's baby. Though I wish I could break the news to Gigi that she has nothing to worry about - since Stacy went Fishing for a baby - I can see the obvious about why she feels this way toward Schuyler… She feels safe with him, he reassures her by talking down on Stacy and up on Rex by trying to convince her that Rex loves her. Bottom line, Schuyler is doing everything right, and this is what Gigi needs - some stability. Unfortunately, with stability comes real feelings, and there's no denying that Gigi has become attracted to Schuyler. We are going to see these two unfold further with all the happenings planned for November Sweeps. Speaking of which, have you taken a peek at what's to come for this much anticipated time? Check the Sweeps Spoilers out today!

I will give Nick and Amelia props for fighting for what they want, but to be honest they are a bit creepy to me - with all of their hand-holding, hugging and secret agendas. We've seen the lengths Amelia is willing to go to, by using Dorian to get equality for all, but Nick, and his roundabout marriage proposal to Kyle - a bit much. Kyle has always been the strong-minded half of Fish and to make him the gullible, naïve half of Nick is ruining the storyline for me. I can see it now, Fish will take on the role that Kyle once had in their relationship, during and after college, and will be the one to save Kyle from becoming the other half of Mr. Nick Advocacy. If everyone is granted their day at the altar, which I hope they are, I'm praying for Kyle to leave Nick standing alone and tie the knot with his college sweetheart, Fish!

Thanks for stopping by again this week! Please feel free to vote in my poll about Nora and Bo tricking Matthew and share your thoughts on the show's storylines below. If you want more scoops on other soaps, follow Soaps.com's Editor-In-Chief on Twitter @soapoperafan and add me on Facebook!

One Life to Live Video Clip: Someone...

One Life to Live: Michael Easton's...