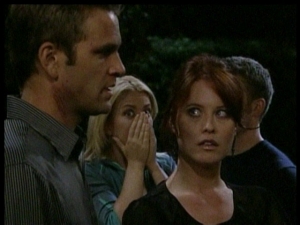 The Riveras get an eyeful! (Soaps.com)

Did you see Jared’s face when his cell phone rang – after he denied having known the dead man outside of Llanfair! John is back in total cop mode, not often that he’s not, but am I the only one who thinks he’s enjoying trying to prove Jared is guilty a little too much – even if there is a ton of evidence piling up against Jared? Last week I admitted that John and Natalie never were able to quite make it work, but I’ll also say that I always liked them together. Back in the day, John was faced with so many demons surrounding Caitlin’s murder, maybe they can make it work this time – if he’s not as serious as he’d like us to believe where Marty’s concerned – and since Jared is leaving Llanview soon… Hmmm, it’s a thought! Look for Jared’s connection to Wayne Landers to come out – and another dead body to surface!

When Tea ran into Ross, I expected her to fight a little harder to try to convince Ross to let her be happy, or at least to show a bit more paranoia by his presence in Llanview, but no, what we got was Tea crying, some more, then throwing around empty threats – when she’s the one trying to hide this big secret, which we now know is that she has a child. Todd, bravo, for kicking Tea to the curb, but I couldn’t help feeling sorry for him, as he was clearly hurt – so unlike the reaction of the Todd of old days. The old Todd wouldn’t have put so much emotion into the feeling of having been deceived and would’ve immediately set out for revenge. Then there was the big confrontation with Blair, who ended up smashing through a window… Some may say this is poetic justice, since Blair pushed Tea out a window years ago, but come on – it’s just too unreal. Two of the same women playing super woman in the same town separated by a few years apart – what are the odds? Why not have Tea come upon Blair at the quarry, ya know, the one we haven’t seen in eons, maybe Blair could have went there to soul search, Tea appears, they have it out, Blair falls into the water, hits her head – or maybe Tea pushes Blair in that old well that Asa was stuck in years ago – anything but out another darn window.

When Fish ran into Stacy, who is now clearly pregnant, it almost appeared as though he was happy at the prospect of being a dad – until Stacy quickly gave him the old ‘I was with Rex before you’ line. The relief quickly washed over Fish’s face, but I was a little disappointed that Fish let the possibility that Stacy was carrying his child go at that. I hope, with Fish being a cop and all, that he’ll revisit this possibility because I can’t imagine Stacy and Kim getting away with this mess. The green-eyed monster hit Gigi over the head this week, which makes me anticipate a Gigi/Schuyler hook-up even more. Unfortunately, this isn’t the end of Stacy and Kim’s games, so look for many to be affected by their shenanigans – and I just may get my hook-up!

The Riveras brought their son an apartment warming gift in the form of a vacuum cleaner, and what did they get in return? A front row seat to Markko and Langston's sex video "Christian Boy Gone Wild With Cramer Woman!" I couldn't help it, I burst out laughing, not only at the Rivera's reaction but at Langston, Markko, Starr and Cole's as well! I mean, could you imagine? If I had been Langston or Markko, I would've been mortified, but being in Starr and Cole's shoes, I hate to admit it but I would've had a hard time stifling laughter and amusement.

While David gave me a few chuckles this week, in reference to Dorian asking him to pretend to be gay, saying, "I won't go gay for pay," Dorian on the other hand has me bored to death - already. There is something clearly fishy about Amelia, who happens to be a lesbian and happened to make a trip to Dorian's right after Nick chatted up David at Viki's… Hmmm, could Nick be a little shady and could Fish be the one to expose some hidden fishy plot of Amelia and Nick's - or are these two just fighting for a cause? I'm just brainstorming here, especially after Amelia's cryptic conversations with Nick and Fish's warning to Kyle about his new boyfriend, but I'd like to hear what you think!

We are all anticipating Kevin's return, but don't count on him coming back to Llanview. You'll never guess what Bo and Nora have up their sleeves in order to keep Matthew from having the life threatening surgery. If you can't wait to find out, I've added the details on the Spoiler page.

Thanks for stopping by again this week! Please feel free to vote in my poll about Tea's mystery child and share your thoughts on the show's storylines below. If you want more soap scoops, follow Soaps.com's Editor-In-Chief on Twitter @soapoperafan and add me on Facebook!

[crowdsignal poll=2088622]
Tea admitted she had a child, but who is the father?(surveys)

One Life To Live Halts High...

One Life to Live's Ty Treadway And...