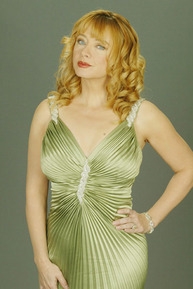 In daytime, stars come and go, sometimes leaving us with no explanation as to why. However, in the case of One Life to Live’s Andrea Evans (ex-Tina Lord Roberts), things weren’t as simple as not being able to negotiate a contract or even having been fired for that matter. Expressing that she absolutely loved her job and the cast of One Life to Live, it was nothing short of a nightmare that forced her to leave the show.

Out of respect for the actress, without going into detail, as many actors and actresses know, not all fan encounters are good, some are even downright scary… Therefore, Andrea had no choice but to give up the job that she loved!

Andrea’s run with the show first came in 1978 – 1981, then again in 1985 – 1990 when she returned to reprise her role as Tina Lord Roberts. Now playing Rebecca Hotchkiss Crane on the soon to be canceled NBC’s Passions, Andrea has expressed that there is no longer ‘that threat’ and that if asked she would be very interested in returning to OLTL!

I’ve always been a big fan of Andrea’s and know that the fans would welcome her and Tina back in Llanview in a heartbeat! Let’s face it, her character has been missed since the day she left and could easily march back into town as if she hadn’t been gone at all! Here’s hoping!

To learn more about Andrea and her career, please visit her website at Andrea Evans!