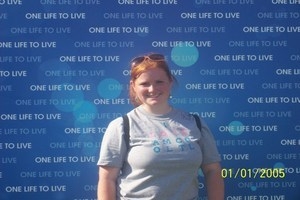 Recently, I had the pleasure of talking with one of daytime’s biggest fans, Brittney, who wanted to share her fan encounter with some of ABC’s hottest soap stars!

A resident of Mobile, Alabama, Brittney hopped in her car and drove an hour away to nearby Pass Christian, Mississippi to attend the Project Build-Up hosted by Bob Guiney. The event took place at a school where the stars helped to rebuild the school’s playground. Describing it as the best time in her life, Brittney met many of the actors from One Life to Live, All My Children and General Hospital with OLTL and AMC being her two favorite soaps!

While the stars were there to help rebuild the devastation that all the Hurricanes had caused, they took time out to sign autographs and take photos with their fans. Those attending the event included OLTL’s Kamar de los Reyes (Antonio), Bree Williamson (Jessica) and Kristen Alderson (Starr), amongst others from AMC and GH. You can see Brittney above and below, sporting a shirt marked “I Love OLTL and AMC” with OLTL co-stars Kamar and Bree!

As Brittney stood in line waiting for the event to start, she had the pleasure of talking to the bus driver who drove the stars from the hotel to the event! Brittney said, "At first he [the bus driver] had no idea who they [the stars] were, so we had to clue him in He was constantly asking questions about who he should get autographs from because his wife watches the show, and I was like "All of them!!!!" Also during her wait, an ABC representative took her picture and she ended up on the
Fun In The Sun website!

As the stars started rolling in, Brittney commented, "I took so many pictures, it was crazy. I was just happy to be there." Her first encounter was with AMC's Colin Egglesfield (Josh). "While I was taking a picture of Colin putting together a sign, he turned around and saw me and gave me a big smile. I yelled "Thank You!" Then he stopped what he was doing and said, '"Do you want to make this official?"' I was thinking, "Me?" The next thing I knew, I was taking a picture with him! Soon after I was posing for a picture with Kamar (Antonio) and Bree (Jess)!"

Although the event was overwhelming, all the stars were very nice and down-to-earth. To add to the fun, she won prizes and received autographs from the stars. Brittney went to tell about a fan who got dehydrated from the heat and passed out. In the midst of everything, Kristen Alderson (Starr) took the time to approach the fan and make sure that she was all right. "What kind of celebrity does that? How nice!!!" Brittney said.

Just when Brittney didn't think that her day could go any better, a news reporter approached her with an interview request for the nightly news and she got the opportunity to be on television! "It was the best day of my life. All the pictures that I took are in frames now, something I will treasure forever"

Soaps.com wants to thank Brittney for taking the time to share her wonderful fan encounter with us! May we all be so lucky to one day meet our favorite actor or actress! Brittney, you were a very, very lucky fan!!!

Clearing Up An ABC Rumor!