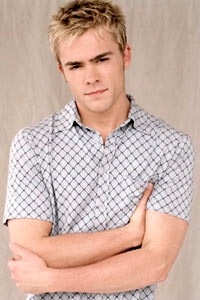 While most actors do their best to promote present and past movie ventures,
One Life to Live star John Paul Lavoisier (Rex) suggested the total opposite in regards to his 2002 movie “Wolves Of Wall Street!” In fact, he even goes so far as to say that unless you’re into seeing soap hunks acting outside of their normal town, in Rex’s case – Llanview, then refrain from picking up and renting his low-budget movie!

The movie surrounds a group of stockbrokers who gain success through predatory means. Playing side by side with John Paul is Jason-Shane Scott (OLTL’s ex-Will) and AMC’s Jeff Branson (Jonathan).

Although I find it hard to believe that any picture featuring the sexy OLTL star could be as bad as John Paul describes, the upside to what would seem like a flop is that he can look back and laugh on the experience, calling it his ‘skeleton in the closet.’

No matter what the case, John Paul has surely intrigued me into renting “Wolves Of Wall Street!” Hmm� if John Paul is anything like his character Rex, could it be that that’s been his angle all along? If so, it worked on me!