Again, the mayor is gunning for John, thinking he's been the killer all long. We know this isn't true, so here's my theory. I know Lee Ramsey is dead, but remember when he was the police commissioner - he had the mayor, or the mayor had him - in his back pocket. Wouldn't it be something if Lee miraculously came back from the dead and ended up being the killer? He has a connection to Marty and Janet - hated Todd - and could have killed Wes just because he was connected to Marty. After all, the killer had the perfect opportunity to kill Marty the night they killed Wes. Then there's Talia… the latest victim… Lee hated her as well and didn't try to hide it when he was in charge at the Llanview PD. I'm very upset that the show decided to kill Talia off, but I want to wish the actress, BethAnn Bonner, all the best!

It's apparent that bringing Rachel back on canvas is about more than having her be there for Matthew and Nora, rather I think she's going to be a big part in Cole's recovery - even though I think the writers could have managed this without her. On the note of rehabs, I've never seen someone who has been sent to rehab have the freedom to roam outside of the facility like Cole has, which gives an addict the perfect opportunity to get some drugs! Shame on the writers for overlooking this, considering the severity of the case and the jail time Cole was facing in exchange for rehab. Good thing Cole has friends who will pee in a cup for him every time there's a random drug test thrown his way!

How many of you think Destiny is a breath of fresh air? At first I wasn't sure where her character was going, as we already have a bit too many teens running around Llanview, but seeing her be there for Matthew has been wonderful - and knowing she's Shaun's sister and that they have this mysterious brother out there, is finally giving Sean Ringgold (Shaun) a storyline of his own. I'm all for it!

With May Sweeps right around the corner, be sure to visit the Spoilers Page, as I've already started to tease you with what's to come!

Before you head out for the weekend, be sure to vote in this week's poll about Talia's exit, and, as always, thanks for stopping by to rant the week off with me! Whether you agree or disagree, don't forget to leave me your comments below! 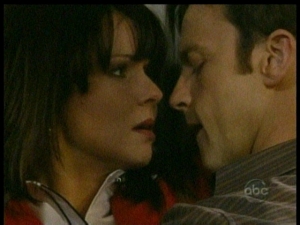 I must say, given how some soaps have a knack at dragging out certain storylines, I was very impressed that the show didn’t drag out the hostage situation too long. It was a perfect length, a few episodes, and it ended with a bang – literally – and a very unnecessary bang, if you ask me. John was wrestling Zach, and Todd grabbed the gun. Zach wasn’t going to get away. Yet Todd couldn’t help himself… He aimed and shot – like it was some carnival game, never worrying that he could have shot John instead! I know he doesn’t like his kids’ new stepfather, but really, was shooting John worth going back to the slammer? Only in Toddland! Speaking of Toddland, only Todd could get away with talking to a woman like he talked to Tea! Wow, I’ve heard of using reverse psychology to get what you want, and have even tried it myself, but man, Tea fell into his ploy hook, line and sinker – so we thought… Tea turned the tables on Todd, took what she wanted and left him stewing! If I had to answer if I thought the scenes between these two were hot this week, I’d definitely say yes!

During my interview with John-Paul Lavoisier (Rex Balsom) this past Tuesday, we talked about Rex and Gigi a lot, and he even gave me a few teasers for what’s to come – go check it out! I wanted to reach through the screen on Monday and prevent Rex from interrupting Gigi from telling Jessica the truth about Brody – because I so badly wanted Rex to hear the truth! This storyline absolutely drives me mad, and it could be handled so differently by Gigi, and easily so. I was glad to see Schuyler become suspicious of Stacy and hated seeing him grovel for her affection like he did – next thing you know, he’ll be turning to drugs again. Please One Life, keep this man the strong character he came to Llanview as. We don’t need any more distressed Llanview residents!

All of the evidence surrounding Chloe’s paternity has been destroy – all but the lock of hair in Starr’s locket, which the show made us painfully aware of. First Cole found the locket at Todd’s then Natalie and Jared remembered it while basking in the afterglow of burning the evidence in a trashcan inside Llanfair. I laughed over the whole sex DVD explanation that Jared gave Jessica when she went to borrow what she thought was a movie – having no idea it was the hospital surveillance DVD. I didn’t laugh at the scenario itself but rather at Natalie’s shock that Jared even said such a thing to Jessica! I mean, come on, we all know Natalie has a feisty side. Would it be so hard to imagine that she and Jared would have made a little DVD for their own viewing pleasure?

One Life to Live Poll: Who Is The Llanview Killer?