One Life to Live’s John-Paul Lavoisier Talks To Soaps.com Readers!

One Life to Live’s John-Paul Lavoisier (Rex Balsom) recently stopped by Soaps.com to answer some of our readers’ questions! Find out what he had to say, as you might have wondered the same thing yourself at one point or another!

cadrian_fanxoxo asks: How do you like working with Farah [Fath] (Gigi Morasco) and Crystal [Hunt] (Stacey Morasco)?

John-Paul: All I can say is I enjoy working with Farah. [Laughs] – That’s all I can say. Farah and I make a joke when we don’t work together, we haven’t worked together much lately, and say how weird it is. When we leave for work in the morning, we always laugh and say, “Have a nice day at work,” because we don’t see each other much at the studio these days.

diiva1012 asks: Out of all of the women who Rex has been with who was your favorite to work with and who do you think is the best fit for Rex?

John-Paul: Rex and Gigi belong together. Their love is so strong. They came together and broke up Rex’s marriage with Adriana, who Rex thought was his true love. Rex and Gigi are soul mates, and they deserve to be a family.

LucyBrown01 asks: Do you have any input into your character or do the writers have 100 percent control of what they want you to do?

John-Paul: I’m very easy going about what direction they push me in – I’ll do anything! I never request anything. They may write a storyline and tease the fans to see if it’s something they should go with. Actually, years ago, when I first started, I was called into the office. The writers, back then, said they were thinking about making Rex gay and asked how I felt about that. I didn’t care, but they wanted to get my opinion – they asked my thoughts. That was the one and only time I was asked how I felt about a character move or a storyline.

cliffhanger2008 asks: Who does your hair? It’s AWESOME!

John-Paul: Well, thank you! One of the ladies in the studio, Katie Jo, works in a salon. She cuts and colors my hair on set.

Heather211481 asks: I’d like to know if you’re more of a beach lover or a mountain kind of man?

John-Paul: I hate the beach, so I guess I’m more of a mountain kind of man, even though I don’t climb mountains! Considering some of the buildings in New York are like mountains, I guess I could be a mountain man!

[I have to interrupt the fan questions here for a moment to tell you something funny – well, John Paul didn’t think it was funny at the time. When John Paul told me about hating the beach so much, I brought up the storyline where he and Adriana (Melissa Fumero) ran away from Llanview and headed to the beach, as I wondered how he managed during those scenes. “I hated it,” John-Paul remembered back. “After those scenes I ended up getting this rash, which spread everywhere! I went to five dermatologists and none of them knew what the rash was – and it took about a year for it to go away!”]

JennaRose87 asks: As someone who is currently battling cancer (as I am sure lots of other viewers are) are you doing anything to help prepare for such a strong/sad role (having your son have cancer) or have you already had experience dealing with cancer?

John-Paul: I don’t know how I’m substituting the storyline in my head. I guess I just imagine something horrible happening and how I’d feel losing someone in my life. If this were happening in real life it would be the most devastating thing in my life.

LUVIN AMC asks: How do you keep such a perfect bod, and is your tan real or a spray tan?

John-Paul: The tan is real – it came from bulbs! [Laughs] No spray tan here! Right now I’m doing this interview from a gym lobby in Kentucky, where we are visiting some of Farah’s family. I go to the gym five days a week.

CatnEvie asks: I’ve actually really enjoyed your character of Rex since he first came on the show. I’ve always thought he was a great addition. What has been your favorite PAST Rex storyline?

If you want to find out more about how much John-Paul really loved the 1968 storyline, be sure to read my interview with him, where he talked about his character in the One Life to Live News Room, as well as the interview about his time on the Soap Opera Mania Tour! 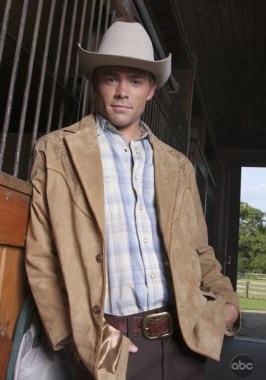 One Life to Live's John-Paul Lavoisier Chats With Soaps.com About Rex Balsom!