One Life to Live’s John-Paul Lavoisier Chats With Soaps.com About Rex Balsom!

Speaking of Shane, and the cancer storyline, John-Paul filled me in on how his new haircut came to be when I asked if it was something he offered to do or if it was something the show asked him to do. "I was told." He laughed. "Which is fine because I'll do just about anything… When you're on a soap, there are certain things written into your contract that you have to do. I signed a contract saying if the show wants me to do something, in a physical capacity, I have to do it. If they want me to gain twenty pounds, I'll gain twenty pounds. Frank [Valentini] gave me a three-week heads up." Though we all know that the actor who plays Shane is wearing a make-up cap, which John-Paul said takes an hour and a half to put on Austin, he also confirmed a rumor that's been said about Farah having wanted to shave her head. "Farah was dying to shave her head, but the show said no," John Paul confessed. "She's happiest when her hair is the shortest. I think she's found a length she's happy with now."

Fans, this is some of the perks of interviewing an actor who is also dating one of his co-stars… We get the goods on them both! Over talk of John-Paul's relationship with Farah, he admitted that being an off-screen couple, as well as on-screen, has its perks too! "When we're together on-screen, it's very easy - we have great chemistry. The fighting scenes can be difficult because we don't hate each other. Actually, being together in real life helps us because we spend time at home running lines, as opposed to actors who have to wait until work. By the time we get to work, we really know our stuff!"

When I interviewed David Fumero (Cris Vega) I asked him how hard it was to watch his wife Melissa (ex-Adriana) play in the love scenes with John-Paul, and he had said that though it made him uncomfortable, he trusted John-Paul, even said what a great guy he was! It was only appropriate that I ask John-Paul how it was for Farah to see his character so closely involved with Melissa's. "Farah gets it. It's just a job. I was very comfortable working with Melissa. We were really good friends and comfortable with each other, so that made it easy," John-Paul set the record straight. "I've known David longer than I've known Melissa. It was all very cool, professional and respectful, and besides, David's bigger than me, so I was always on my best behavior!"

It seems we see more and more Daytime actors trying the Primetime and film waters these days, and though John-Paul has done all three, he admitted that his heart lies with Daytime. "It's funny, at this point, I almost prefer the soaps. I've gotten used to working so fast, used to having all these cameras around. We [in Daytime] get spoiled because we pump out so much product, so fast, verses a film - and all the repetitive takes for just one small film scene. In soaps, we act fast, take directions fast, and as far as I'm concerned, anything other than soaps is like snails pace."

With that being said, John-Paul did tease that he and Farah have a new project in the mix! "I can't mention it yet… Farah and I do have something in the works, something substantial. The contracts are being finalized, but we still don't know about a network. That's all I can say."

Soaps.com will keep everyone posted on this new mysterious project of theirs, but for now, we'll look forward to all that's to come for John-Paul's character in Llanview!

If you want to see what John-Paul had to say in response to some of our Soaps.com readers' questions, you can find out here! 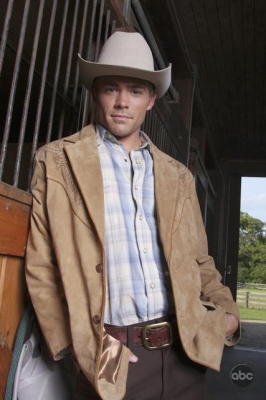 After chatting it up with One Life to Live’s John-Paul Lavoisier (Rex Balsom) about his time on the Soap Opera Mania Tour, which you can read in our OLTL’s News Room, John-Paul and I turned the interview to his Llanview character, Rex Balsom, where he gave us some insight into what makes Rex tick, his favorite storyline and many other fun issues – like how it feels to work alongside his real-life girlfriend Farah Fath (Gigi Morasco)!

Over the years, Rex has been thrown into many storylines, so when I asked John-Paul if he had a favorite, he replied, ” I do have a favorite… I know that some fans liked it, and others hated it, but the best for me was the 1968 storyline. A lot of fans had a hard time splitting their imaginations, but we, as actors, were able to let ourselves go. I loved working so closely with Robert Woods [Bo Buchanan], riding a horse for the first time, the music and the editing – it was the best. It was the coming together for Rex and Gigi, and great characters got to hover over the one storyline.” As John-Paul remembered back, he expressed, “It was a wild ride, the best storyline I could ever ask for, the best summer of my life. If I’d known how great it was going to be, I would have enjoyed it more!”

We’ve watched Rex evolve from being the carefree playboy, to a married turned divorced man, to a new dad, which is something totally new for Rex. When I wondered if there was anything that helped John-Paul get into ‘dad-mode’, he very honestly answered, “I don’t know how I got into dad mode… I don’t have kids or a dog – I used to have a goldfish.” He laughed as an afterthought. “I hope I’m doing an okay job because I don’t even want kids. I was very surprised that Rex grew up to have a ten year old. They [the writers] had Rex grow up very fast. He’s been playing it safe, and I’m kind of anxious to see if they’re planning to have Rex screw things up, maybe digress in some way and be forced to face the effects that it has on those he loves.”

While John-Paul was being so open about his character and all that surrounds him, I was curious as to what’s to come for the Balsom/Morasco clan as a whole – and he gave us some great teasers! “What you’re seeing now is going to play out a bit longer,” John-Paul admits. “Gigi keeping secrets from Rex, Rex being on Stacy’s [Crystal Hunt] side… It’ll get deeper, a sadder drama, Stacy will dig her way into Rex even more after Shane’s [Austin Williams] transplant.”

One Life to Live's John-Paul Lavoisier Talks To Soaps.com Readers!