We've seen Starr go through a lot during her childhood and teenage years, but a stalker she is not - nor is she even remotely convincing as a 'woman to be had'. Her scene with Schuyler, and how she was begging him to take her, was laughable in my eyes. I was glad to see Schuyler set her straight, and I hope that he did it because he really didn't want her - not just as a way to deter some hidden attraction. I'm just not sold on the idea of these two being romantically involved, no way! Starr should be so happy that Cole is fighting for her after how she pushed him away during her pregnancy.

When Todd was faced with his past, in the means of Zach Rosen, his face held more fear than it did before he jumped from The Palace roof! Of course, Todd kept up with his cool calm and collected attitude, but Zach had him shaking in his Gucci shoes! I did like hearing Todd refer to Blair as his wife when he asked Zach if he had stabbed her, as, in all unpredictablness, Todd and Blair will probably always end up finding their way back to each other. However, for now, Todd has more important things on his hands, yes, besides punching Schuyler! With Zach holding his little girl hostage, if Todd could ever kill with his bare hands, opposed to his pocketbook, this could be the time!

Before you head out for the weekend, be sure to vote in this week's poll about Starr's obsession with Schuyler, and, as always, thanks for stopping by to rant the week off with me! Don't forget to leave me your thoughts below! I'd enjoy hearing what you have to say!

Have a wonderful holiday, and I'll see you back here next Friday for another week's worth of Amy's "One Life In A Week!" 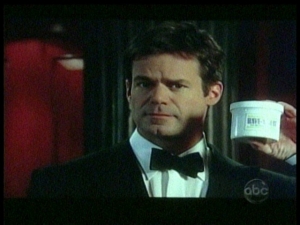 Credit: Zach's Out For Revenge! (Soaps.com)

It was nice to see David Vickers back onscreen this week, and even funnier to see the look on Dorian’s face when she watched his commercial promoting hemorrhoid cream! (If you missed it, I posted the full commercial video clip in the One Life to Live News Room) I thought Ray was going to lose it while watching the commercial with Dorian. Did any of you watch Santa Barbara back in the day when A Martinez (Ray) played Cruz? These seducing scenes he’s playing with Dorian has brought my memories of Cruz rushing back – and how much sex appeal A Martinez puts into his characters – come on, everyone, on three… one, two, three – hot! Unfortunately, the actor will again be leaving Llanview in the coming months, and, to say the least, the show is losing a big chance to have a new character evolve into a main player – as I know Ray could have been one day.

Is there something in Llanview’s water? Why in the heck would Kyle so easily agree to Stacy’s plan – and risk his job? All he has to do is go to Rex and Gigi and tell them about John Doe, knowing that Roxy will then come forward for her grandson. But no, he’s going to risk his entire career for a girl with a stripper business card. Blows my mind…

So Natalie and Jared have decided to keep Chloe’s paternity a secret – no big surprise there… Remember what I said a couple of weeks ago, both Jessica and Brody are going to fall in love with little Chloe just to have her ripped away – not a spoiler, just a feeling.

I know she just returned and all, but I’m not feeling the Rachel character. I think the show should concentrate on keeping such characters as Michael McBain, Ray Montez and Talia Sahid before bringing anyone else back. If you didn’t guess already, Rachel is going to be Cole’s new counselor, but I really feel that he can overcome his drug addiction ‘behind closed doors’, out of the viewers’ view, if you will, just the same as he could with Rachel’s help. 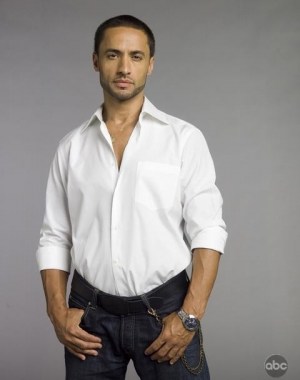 One Life to Live's Kamar de los Reyes In Salt!