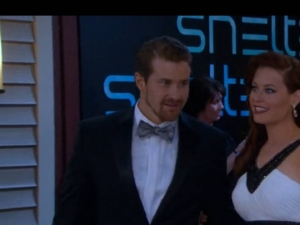 This week brought a brother-sister reveal, the start of the Man of the Year Gala and continued to provide additional edge to a character on the verge of becoming Llanview’s new villain. Let’s break it down…

Natalie and Cutter.
After last week’s letdown of their bedroom tango that didn’t happen on screen, they were back to arguing this week with Natalie wanting to know why Cutter tried to extort money from Clint and then seemingly patching things up after Cutter’s explanation. We viewers are very curious as to how soon we will get the chance to actually see what we waited so long for, only for it to have been more fizzle than fizz.

Clint and Viki.
I believe the more I see Viki yell at Clint about his drinking, the happier it makes me about this reboot because Viki seems a lot edgier and feistier than she has ever been. Sure, she’s got several personalities neatly tucked away inside her but the writers are sure allowing her to finally let loose with Clint about those scotch and pill combos being a no-no. Clint blamed Viki for losing his Man of the Year award but he has no one to blame but himself for getting wasted and causing ruckus at Shelter, only to have it be filmed. Clint found out the hard way that trying to bury secrets has become much more difficult, if not impossible.

The Mysterious Peterson.
The infamous Carl Peterson showed up this week and having watched Ron Raines from when "Guiding Light" was on the air, I was wishing and hoping that the writers would not make him Alan Spaulding lite and I got my wish. Carl was a completely different character and not to mention the brother of one of the battiest women in daytime, Allison Perkins. Viewers such as myself are probably counting the days until we see the interactions between Carl and his few clowns short of a circus sister. He kept going on about the Lord boys as well, so there's definitely much much more to this than meets the eye. And is Jeffrey just another minion of the organization, or is an even bigger twist coming? Two things were clear: the writers were intent on showing us his toenails yet again and he has a knack for pill switching.

The Man Of The Year Gala.
Bo was asked to be Man Of The Year instead of Clint. It was a spur of the moment thing given Clint's club hoppin’ antics. For Clint to go crying in a corner with a bottle of booze was expected. The wedge between the two brothers is bound to escalate from here given Clint playing, 'Why is everyone always picking on me?' Even though Bo is receiving the award, I like other viewers probably cannot wait for Clint to stumble into the gala in a stupor as long as it isn't over the top. There were some comedy bits sprinkled within though with Dani and Michelle wearing the same flowery dress, Tea's exchange with Dean about whether she was his date and David pushing Blair out of the way to give way for his introduction of Jo Sullivan.

Read Soaps.com's One Life To Live Recaps, both posted every Monday, then take a stroll down Soap Opera memory lane with The City.

Follow Soaps.com on Twitter @soapoperafan and Soaps.com on Facebook to dish on "One Life To Live," all the other soap operas, "Dallas," "Glee," "Grey’s Anatomy," "Pretty Little Liars," "Revenge," "Vampire Diaries" and "Venice The Series."