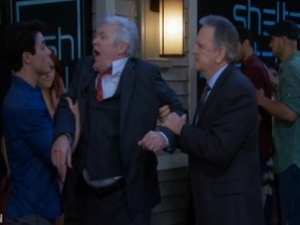 It wouldn’t be the same if we went a few episodes without watching people boozing it up at Shelter, and this week we got a bonus… Clint drunk as a skunk and wanting to dance! There were also a few hit and miss kisses, romance woes and one man’s decision to protect his family. Let’s break it down…

You’re my Viki.
Clint’s gone on quite the bender lately having lost Viki, due to his decisions and lies. Last week he took a stand and refused to allow her to walk all over him for caring. So why did he act like a drunken fool on Monday with the sole purpose of getting her back? Bad writing or good comical scenes? This storyline has proven to be inconsistent through Clint’s theatrics but watching him try to punch his way into Shelter, to dance, then getting arrested by his own brother took the character from pure boring to borderline comical. Maybe a bit of David is rubbing off on his Uncle Clint.

Dani’s daddy issues.
I wish the doorman would have let Clint into Shelter. If he had it would have shortened the time we had to spend watching everyone rant and rave about Dani being out with Arturo. Jeffrey thought she was dealing with daddy issues, but most believed she was out to take everything a sugar daddy could offer. It’s no secret Dani’s confused and torn within her own family but to lean in and try to kiss Arturo… gross. Sure, he’s hot and mysterious, but the age gap is massive, and it’s going to be a bit weird if we have to watch these two have some secret affair. My bets are still on Arturo being out to get Victor and Todd. If this isn’t the case, the writers are wasting a very alluring new character with one who has nothing to compliment him with at all.

Sweet kisses.
Two characters who do compliment each other are Destiny and Jeffrey. Awesome chemistry! Jeffrey continued to be a good guy and went straight to Matthew after he kissed Destiny. Matthew may have his hands full with Michelle right now, but it clearly bothered him to think his best friend and former best friend/mother of his child were taking their relationship to another level. Let's just hope this isn't going to be a case of 'don't know what you've got till it's gone' because if Matthew wanted something more from Destiny, she just might drop Jeffrey flat and give in to her past hopes and dreams.

A changed man?
Loving Cutter's attention to Natalie and his almost vulnerable confessions of weakness. These two have proven to be hot together. They both have baggage and well-known pasts, but their sincere feelings toward each other are enough of a stepping stone to make them work in a more committed capacity. Can we move this attraction forward, please?

Who the heck is Nikki, anyway?
Since she was first introduced Nikki has appeared to play by the rules and has even seemed concerned by the drug use going on at Shelter. It threw me off-guard when she offered the doorman some 'blow' to help ease the pain of his bruised lip and left me thinking, "Hmmm…" Has Nikki been a closet drug user, a dealer or has she really been undercover all this time? Again, this would be a perfect place for the writers to go outside the box and make this character more than a stereotypical man-eating bartender.

A word of warning.
The mysterious notes keep on coming, and Todd will now have to leave town if he wants to keep his family safe. We only get to watch the soap twice a week, and this storyline has been going since the beginning. Things need to wrap-up on this one. It's getting old, and frankly I'm starting not to give two hoots about who's behind the notes or what they mean anymore.

Read Soaps.com's One Life To Live Recaps for this week, both posted every Monday, then get the details surrounding Venice The Series' Season Four Return.

Follow Soaps.com on Twitter @soapoperafan and Soaps.com on Facebook to dish on "One Life To Live," all the other soap operas, "Dallas," "Glee," "Grey’s Anatomy," "Pretty Little Liars," "Revenge," and "Vampire Diaries."