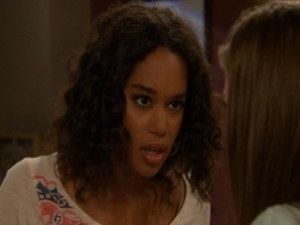 Yesterday marked the 45th Anniversary for “One Life To Live,” and it’s such a joy that the show is still alive and delivering storylines that keep us asking, “What the hell?” Or sighing, “Oh no!” Or gushing, “Oh yes!” Or simply giving us that half hour to spend time with those characters we love and love to hate! This week was no different, and there was a lot of love in the afternoon. Let’s break it down…

All the fuss about Matthew.
Jeffrey tried to warn Dani to cool it with her negative attention toward Matthew in regard to Michelle, and it backfired with a visit from Destiny. Though she was supposed to calm Dani down, Destiny put Dani on the spot and asked why the heck she cared so much who Matthew dated. Finally, Destiny let her frustrations with Matthew out, which should do her wonders simply to have that built-up aggravation released. The only thing that would have made it more beneficial would have been if Matthew had been on the receiving end of her rage. In the end, Matthew was the winner of all releases, having bedded Michelle – the virgin. Is she really a virgin, or does this girl still have another motive for cozying up to the Buchanan?

A producer gained, a wife lost?
David has done Dorian wrong in the past, and she’s forgiven him. Asking him to promise an extra-marital kiss would never happen again was kind of repetitive, considering their past infidelities. Props to David for not groveling at Dorian’s feet and putting his career first, even though he was in the wrong to kiss Rama. Wrong or not, it gave the storyline an exciting edge. Dorian might not care about David’s career, but I can’t wait to see more filming of the reality show now that he has the backing of this new female producer.

Show me the money.
While Clint's shadiness has always been his downfall, Viki swallowing her pride and accepting his help was the right thing to do. In true Viki fashion she did it to not only save her business and Llanfair, she did it save those working for her from not losing everything as well. However, Clint's handouts come at a cost, so we're bound to see more tension between these two on the way down the aisle… if they ever make it that far in their relationship again.

The Nightbird and her Nightowl.
Bo was cute, as he reminisced about his Woodstock days, so it's unclear why Nora wouldn't allow him to be a guest on her radio show. She had no trouble airing her family laundry out to the public when Matthew called in. Either she needs to step it up and take some calls from people who can add real meaning for even having this radio show or fly back to her birdcage. This storyline has been boring from day one.

Love in the afternoon.
Between Cutter and Natalie's spontaneous ravaging kiss, and Todd and Blair's sensual hesitation, I was fanning myself and thanking the writing Gods for finally giving viewers what we crave - love in the afternoon. Both non-couples left me wanting more! Keep the sexiness alive because up until now it's been few and far between.

Read Soaps.com's Interview with Jennifer Pepperman, "OLTL's" executive producer, to hear what's ahead that will rock Llanview and a tease about a big return! And find out what some of the actors' favorite memories have been over the years by reading our OLTL 45th Anniversary Actor Interviews.