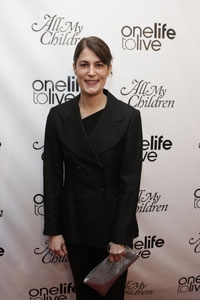 “In life, it definitely matters when you don’t give up.”

As the executive producer of “One Life To Live” Jennifer Pepperman is on the front lines of the evolution of Daytime drama and what that means behind the scenes. After working on “Guiding Light,” Pepperman made the move to Llanview in 1998, but only stayed a few years before working on “As The World Turns” for a decade. She returned to “OLTL” for its final years on ABC and has been with the revival of the show from the beginning. She took the time to speak with Soaps.com about the transition, the swearing, a returning core character and an upcoming performance not to be missed.

Soaps.com: Congratulations on the 45th anniversary of the show.

Pepperman: It is very exciting, and we are very excited we are appearing on OWN then. It is a really amazing thing. When we were canceled by ABC everyone thought that was the end, and here we are back with a second lease on life and a second chance. It’s due largely to the fans who just wouldn’t quit and wouldn’t give up wanting the shows back. It’s a beautiful thing.

Soaps.com: Did you think you would get to see this anniversary after the cancellation?

Pepperman: You know, after the cancellation the first time I knew that the show was a good show, and I knew that I loved these characters so much. Prospect Park was really trying to bring the shows back and I was hopeful. And they were brought back not only because of the fans, but because of the totally amazing Jeff Kwatinetz and Rich Frank who continued their quest and made it happen. They did not give up. And in life, it definitely matters when you don’t give up. I wasn’t really thinking of it in terms of the anniversary when we were going off the air but I was hoping that it would all come together and that we would continue. And we did.

Soaps.com: Any storylines you never thought you would be able to work on but now you would love to see develop?

Pepperman: That’s a good question. I definitely believe that good story is character driven, and our writing team really tries to let who these characters are dictate the type of stories that we want to tell. We do have two stories but I am not at liberty to talk about the stuff we are writing now. We do have one story that was just written, a long-term story document, but you’ll have to call me back in a couple of weeks because I would love to tell you about it. It’s a story that involves one of our core characters who has been on the show for a long time and it is something that in soap history has never been done. It’s a story that has never been told.

But in terms of getting the show back on its feet, we wanted to reintroduce the fans to these beloved characters that they know and love. We wanted to tell character driven story, but we also wanted to move plot quicker than plot moved back in the old days on ABC. With the new format and being online, we wanted to really be able to push plot while developing character. And if you can do those two things together I think you’ll be largely successful. And we want the audience to connect with the characters and connect with the stories through the characters.

Soaps.com: Any classic characters coming back who we can look out for?

Pepperman: We are in talks to bring back a very popular classic character and I’m not at liberty to say yet who it is. But the fans will be very excited by it. Because we are a half-hour show I want to make sure all of the characters on the canvas have story.

Soaps.com: Was the fan reaction to cursing really that bad?

Pepperman: My own husband who is not a prude by any means was really put off by the cursing. He found it out of place, but that’s just one personal example. On Hulu and on some of the blogs there were a lot of comments that people were really sort of put off by the cursing. I definitely believe you can tell good story without cursing and we didn’t want it to be gratuitous. The fans are really important to us and we really value their input and want to listen to them. And it wasn’t just one day or two days. There really were a lot of comments and a lot of emails that people were put off by the cursing. So we decided to make that change. I say s*** a lot, I’m not going to lie to you. And that’s one of those where it just rolls off the tongue. So it wasn’t always scripted and we may have gotten a little carried away with some of the cursing.

Soaps.com: Any a chance it will come back?

Pepperman: I definitely think we are open to the possibility, and you will still hear bitch. You are permitted to say bitch. And ass. I actually received the long, detailed list of all sorts of words that you cannot say, and no one would say those things.

Soaps.com: You have been working in soaps for a while. How is working in this new format different?

Pepperman: I have definitely worked in soaps for a long time, quite a few different soaps, and one of the biggest differences is the excitement across the board about the show from the cast, the crew, and from the writers. "One Life to Live" is such an amazing place to get to go to work every day. It really is an interesting thing when you think something is gone forever and then it’s back. And when there has been a little bit of time, when maybe people haven’t been working or they haven’t been playing a character that they love to play and thought that they would never play again. So there’s been such an energy and a passion in the building and in the studio. The passion and excitement for the show from everybody across the board has been really amazing, and in a way that is what has been most different.

It has also been challenging because I’ve never worked on a show before that we started from the ground up. And of course we had a great returning cast and some returning crew, but walking into a studio when there is literally nothing and four weeks later you have sets. Building everything from the ground up has been a remarkable experience and unlike when you become executive producer of a network show where the infrastructure is in place. We built everything from the ground up but in doing that it was really remarkable. Everybody contributed. We are doing this, and we’re going to be better than before. And it’s been really fun.

Soaps.com: Anything fans can look forward to that you can tell us about?

Pepperman: Spoiler alert! The fans can look forward to in the next couple of weeks Clint wreaking havoc in Llanview. Jerry verDorn’s performance is absolutely going to blow people away. And I will also say that Ron Raines as Carl Peterson, when the fans get to meet him on the air, there will be a twist about who Carl Peterson really is which fans will really be excited by.

Soaps.com: Anything else you would like to say about the anniversary?

Pepperman: Forty-five years is 45 years and it’s remarkable and amazing. We are extremely thankful and hope that we have 45 more years.

Read our interview with Laura Harrier of "One Life To Live."