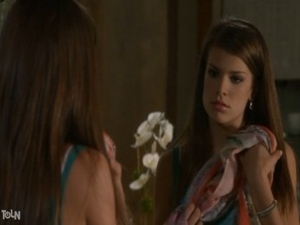 Viewers were treated to a few eye-openers this week, boring as they might have been. Other storylines kept at a steady pace without creating too many more questions, and the infamous tattoo surfaced again, which connected a few more dots. Let’s break it down…

Drugs, deaths and tattoos.
My suspicions were confirmed when the older man who’d last been seen with Brianna proved to have the same tattoo as Victor and those after Todd’s family. He gave Brianna the tainted drugs, the same ones she passed off to Dani, which means someone wanted Dani dead. We all know, unless Victor was brainwashed, he would never hurt Dani, so this leaves a picture in my head of Victor being held down and branded with the tattoo during his captivity. We are no closer to finding out who is behind this cult of criminals, but Arturo is most likely connected. The way he lured Dani to Brianna’s suite and gave her endless compliments, all the while, eyeing her from behind, was creepy. Dani is from a rich family and doesn’t want for anything, but she’s always been insecure, due to her family problems, so it’s clear Arturo will have no issues teasing her into a lifestyle filled with emotional support like he provided Brianna. Todd better put Shaun on Dani’s trail next, or she’s likely going to end up involved in something she won’t be able to get out of.

Michelle the maid.
A is for apple, J is for jacks, B is for boring, how about that? So what Michelle works as a housekeeper at The Palace Hotel? It’s a classy establishment, unlike The Minute Man Motel, so her need to lie to Matthew yet again seemed pointless. I’m still hoping the writers turn Michelle into a stalker or something because as Matthew’s insecure, lying girlfriend, she has no wow factor whatsoever.

Under the table antics.
Let's get this straight… Natalie invited Destiny and Jeffrey to her and Cutter's dinner date so they could be a buffing board in what she's made out to be an awkward situation. If Natalie was so worried about being alone with Cutter, why was she running her leg up and down his under the table, and practically teasing him out of his chair? She should have had a private dinner with him then offered herself up as dessert. It appears to be what she's been aiming for from the beginning. This is a soap, they are adults, so why not give us some love in the afternoon? We've been teased with a Natalie/Cutter romp from the get-go… hell, I'm starting to feel the sexual tension. And speaking of which…

David and the exotic floozy.
The highlight of the week was Rama and David's sexually infused dance at Shelter, which led to their uninhibited, public, hot kiss. These two broke the mercury straight out of the thermometer and left us begging for more until Dorian appeared and warned the exotic floozy to back the hell off! It may not be the end for David and his sugar mama, but I hope we get to see him and Rama take her open marriage behind closed doors.

A lose-lose/win-win situation.
Viki had her heart broken yet again by Clint, who through his own controlling way had only been trying to give her back the money she lost in the Pellegrino Fund collapse. She not only lost her money, she lost Clint by ending their engagement. On the flip-side, Viki won in a sense that she won't get caught up with the law for having Clint take the money out before the collapse, like he claimed, and whether she knows it or not, she's better off without Clint and his antics. These two were once a super-couple, but now they're like oil and water - and don't mix. This storyline would've benefited if Clint had caused Viki to get caught up in a Ponzi scheme by no fault of her own. Viki could've fought her way through while Dorian tried to bury her alive. Good viewing with a bit of depth! Now that she's in the clear, though having lost millions, we can only imagine what pettiness Dorian will get up to surrounding Viki next.

Read Soaps.com's Interview with Laura Harrier to hear about Destiny's tattoo and how the actress' family reacted to her Llanview role.