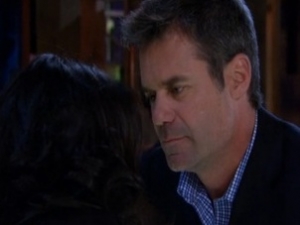 This week had some on the warpath for more than one reason. The tramp-stamp lived on. Uncertainties continued and a few became enlightened. Let’s break it down…

Dorian stirs up her witches brew.
Dorian is at her best when she’s stewing and a few more ingredients have been added to her witches brew. The cauldron is about to bubble over once she uncovers how Viki was able to get her money out of the Pellegrino Fund before it collapsed and there’s no way Dorian is going to let that issue drop until her enemy pays. Aside from that, Dorian couldn’t convince David that she’s a sure fit to be his leading on-air lady but got a taste of how much Rama is enjoying the role. Dorian walked out of Shelter with her dignity intact, but she’s no fool. David has strayed before and from the looks of things he might just go there again after questioning Rama’s open marriage. I say bring it on!

Faking Victor’s death.
This storyline was at a standstill and only delivered more distrust and worry. Todd’s plan is to pass off a dead body as Victor’s, but does he plan to have the tattoo artist ink Victor’s tattoo on Robert’s dead body? If so, how will he explain the non-DNA match? So many unanswered questions.

Clint and the Buchanan-way.
On the flip-side, the writers dropped the ball on having Natalie forgive Clint so quickly. It wasn’t a big surprise, but since Clint seems to have all sorts of connections Natalie should have insisted he find a way to make this right with John. ASAP! Frankly, the Buchanan-way or not, Natalie let Clint off way too easily.

Teacher's pet.
Kate took 'the teacher's pet' to a whole new level when she, the adult, answered Jack, the child, with a kiss when he suggested transferring to another class, due to their sexual connection. It would have been one thing for Kate to end things with Jack, having realized he was her student, but no… She preyed on him. And while this is very wrong, I couldn't be happier to see the way the writers are taking this - down the public awareness route.

Destiny's tramp-stamp.
From someone who has tattoos everyone knows you never even start a tattoo without the artist putting a stencil on you and having you look into a mirror to make sure the placement is correct let alone leave a tattoo shop without looking at the finished product. Sure, once the tattoo is done it's done, but that's the procedure nonetheless. It was a little scary when the tattoo artist covered the tattoo and told Destiny she couldn't look at it for six hours. Who the hell knows what's stamped on her lower-back! Hopefully Natalie was keeping an eye out.

Matthew's on-air awakening.
If we have to listen to Nora The Nightbird give advice it's good that her words haven't only been beneficial to her callers but they've seemed to clear the air between Matthew and Destiny and hopefully open her son's eyes a bit more as to how much his help is needed with Drew's upbringing. Other than that, her persona isn't doing anything for me.

Arturo's mystery.
Arturo's actions only made him and his motives/connections more mysterious. One minute he acted as though he really cared for Brianna (as creepy as it was) when sharing with Dani how they met. The next minute he seemed to be making sure the identity of the older man Brianna had been seen with was covered. He could simply be digging for who his young love had been keeping company with at the time of her death but my bets are on something way deeper.

Read Soaps.com's One Life To Live Recaps: Part 1 and 2 for in-depth details on how all of this week's storylines went down, including a peek into what's ahead for next week.