Jessica gives Natalie a gift - the gift of truth!

"I knew what Tess wanted to do to you. I could have stopped her, but I was so angry that I let her come out because I knew she could do what I couldn't. I wanted her to kill you," Jessica admitted to Natalie… What can I say, another brilliant move by the writers - as a way to keep the real truth from Jessica, while giving Jessica a reasonable reason why she'd want to be burying what she thinks is the truth, and at the same time leaving Viki to realize that there's more to the truth than meets the eye! Now if that isn't a rant, I don't know what is! Though hurt, Natalie should forgive Jessica, if not for anything but for her sickness, but I can see where Natalie is getting frustrated with Viki always taking Jessica's side - and it was nice to see her tell Viki so!

Though nothing has been mentioned about this on the show yet, earlier this week I brought you news that Llanview plans to throw another Go Red Ball this February! In light of the occasion, although a bit early, let's take a look back at last year's ball - and all the secrets still surrounding it!

Janet comes out of hiding and hatches a plan with Nora!

"You have me!" Janet shocked Nora in regards to her wanting to help prosecute Todd… Now things about to get interesting! When Janet left town, I never thought we'd see her again - I even marked her 'past' in the Cast List! I can bet that Todd will not serve jail time, so where will Janet's testimony fit into this equation? I'm betting that someone will come forward to refute Janet's claims. If I had to write the ending for this storyline, I'd like to see Schuyler come forward and have to save the man who led his mother to suicide - just to save his mother's good name! After all, it is a soap and crazier things have happened!

Vanessa scrambles to avoid the truth - as does Dorian!

"Oh, Lord, and I don't mean Dr. Dorian Lord!" [Inserted quote from Amy]... I still can't get over how smitten Cris is with his new bride - and how easily he's gotten over Sarah! I am so happy to see Lola finally starting to face the past and confiding a bit in Tea! If anyone can stop Vanessa, Tea is the one to do it! On the other side of Llanview, Dorian's latest scheme isn't anything new from her book of tricks. Although it is funny, I hope David doesn't fall for it! The last thing we need is another David/Dorian wedding! With Dorian bringing Delphina back on the scene, I truly hope she gets a vibe and runs to Tea, Lola or Cris with it and exposes this secret once and for all!

"1, 2, 3, 4… There's only one thing to do… Three words for you, I love you…" Again, another great musical guest: The Plain White T's! I really enjoyed the montage during their performance… the tension between Cole and Starr - and poor Matthew getting busted by Bo! For those who missed this scene, I've included the video in our One Life to Live News Room!

After you vote in my latest poll, please take a moment to post your thoughts below! 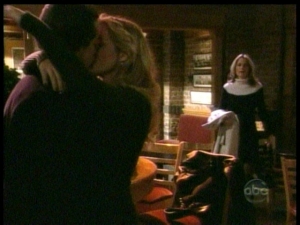 Credit: Natalie's had it with the excuses! (Soaps.com)

Here we are again, ready to tear apart the past week in Llanview, and I want to thank you all for stopping by to do so with me! Though the show was pre-empted on Tuesday, there was plenty that still took place, so let’s get to it!

“No, I’m not going to do that,” John told Blair when she asked him to kick Marty out of Rodi’s… While I understand why John didn’t throw Marty out, she should be darn lucky that Blair didn’t knock her out – like the old Blair would have done – for running her mouth like she did! If Marty wants to revert to her party girl days, so be it, but please writers, please stop throwing this unbecoming attitude of hers at us!

Todd hugs Blair, and she gives him his kids!

“If you want me to beg you, I’ll beg you, please,” Todd said, to which Blair finally replied, “I’ll go get them…” This scene couldn’t have worked any better! We were able to see both Blair’s reluctance and her remaining feelings for Todd as a father shine through at once. Seeing Todd with Jack and Sam, I’m convinced that the show must redeem Todd so he can move on from this madness with Marty and get back to being the great dad he’s always tried – and I stress tried – to be!

“What happens if I decide to do it anyway?” Cole asked in regards to his drug use, leaving Starr to reply, “Then I’ll have to accept it…” I must say, I think the days of Starr being a young girl are totally over. She has grown up so much from the experience of being a young mother, who lost her child, and I think the writers have done an excellent job with this! It would be so easy to allow her character to go back to being a kid again, but portraying Starr in this light sends a message that what she went through was real – and not something any teenage girl should take lightly. Though we are going from one controversial storyline (teenage pregnancy) to another (teenage drug use), I think it’s a great way to reach kids – or the parents who are dealing with this type of situation.

Nora and Bo find themselves in the principal’s office!

“Someone’s dealing drugs,” Bo said to the principal. “And I want to know what you’re going to do about it…” Though Nora begged Bo to take it easy on Matthew, it was definitely their civic duty to go to the principal with this information – and best that they didn’t forced Matthew to go as well. I like Matthew’s storyline, as a rebellious teen, as he hasn’t really had one all his own since he came on the show in 2001.

One Life to Live: Jackie Hoffman To Appear! 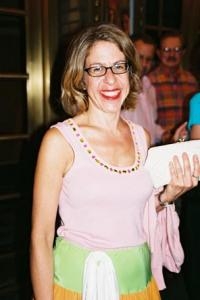