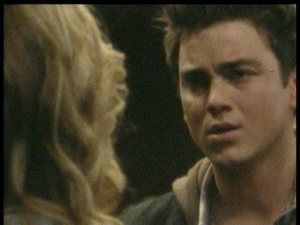 The weeks keep ticking by and the drama doesn’t seem to be stopping! Thanks for stopping by to share another rant session with me about the past week’s storylines – or lack there of! Remember, I want to hear what you think as well, so please don’t forget to drop me a comment or two about your take on things – whether you agree or disagree with me, it’s all good!

“I’ve tried so hard to connect to you. I feel like a fraud. It’s just not working,” Marty told Cole… While I realize that Marty has been through a lot – to say the least – I think, as a mother, her actions toward Cole are absolutely appalling. Marty could lash out at everyone but Cole, no one would care! They’d all think of what she’s gone through and totally understand. But her son, whether she remembers him or not… Bottom line, he’s been through so much loss, is hurting beyond belief and what does Marty do, she pushes him away. Guess Marty lost more than her memory and better look up the first rule of being a parent before her actions are the cause of something a lot bigger than Todd brainwashing her! It’s just downright sad. While Starr is finding some comfort in her connection to Schuyler, who I think is a huge asset to the show, Cole is again alone – and turning to drugs and rage, which are holding him in the painful past.

Grrr… Did you hear me screaming, “No, Cris, don’t do it!”? Well, I was… By now you know I am not a fan of this coupling at all, and the image of them mauling each other has led me on a journey to find something, anything, to replace it! This is where my video of the week comes in. I’ve dug up another ‘first’ roll in the hay session with hopes of deterring my mind from this week’s latest one. Although this couple is no longer together, I think we can all agree that Antonio (brother Vega) and Jessica’s first time was hot! Sit back while we revisit the quarry, a place where Jessica had another ‘first’ – with Nash, while married to Antonio! Oh, don’t you just love the world of soaps?

I have to say one more thing on this storyline… With Tea on Ray’s side, Vanessa doesn’t have a prayer! Enjoy all that hot Vega nookie while you can, Vanessa!

Todd passes St. James and heads straight to the cemetery for a confessional!

“I want to say I’m sorry. The reason you’re not here with us, the reason you died, is because I killed you,” Todd confessed at Hope’s grave – with Starr listening… I can see it now, Todd is heading down the road to redemption, not only to those who love him, but to some of the viewers as well. Isn’t it fascinating how one month everyone hates Todd for what he did to Marty, and in the next Marty is now the victim of viewer’s barbs? I guess it’s better than being coerced off The Palace roof!

Janet goes to her ex-madam for help!

“I need you to hide me,” Janet cried to Renee… Oh, Renee, what are you thinking hiding Janet away from the law. Call me a stickler for show props, but I was so excited when Renee offered Janet the mansion’s guesthouse, as it’s been so long since we’ve visited that part of the set – since August of 2005 when Asa hid Margaret Cochran there! Now, let’s just hope they show it to us again! I was beginning to think it burned down or something…

Shane catches his mom and dad in the aftermath!

"It's time we had a talk - man to man," Rex told Shane… What a well-rounded scene this was! What started out as a very serious father/son talk, and drove the point about sex home, ended with Marcie spitting her beer out at Rodi's when Shane asked what a [insert Amy clearing her throat here] was! It's a good thing I was typing and not drinking myself, or I would have tested my spill-proof keyboard for all it's worth! Bravo to Austin Williams (Shane)! What an amazing child actor he is. For those who missed my exclusive interview with the young star, you can still read it here

Jessica and Brody put their own spin on therapy!

"It's a lie," the little boy told Brody, as well as Tess told Jessica… What a way to make this non-couple all the more likable - to have them giving their own therapy sessions at St. Ann's! I think Brody and Jessica are realizing that their problems aren't all that different, which could make this pair work as a longtime couple - in my eyes. It's nice to finally be getting closer to the truth for Brody and Jessica in this storyline, but I think its ramifications will carry on for months to come. I'm betting that Brody will end up accepting what happened in Iraq and will continue to help Jessica through the loss of her child.

Dorian throws out her sex appeal, which isn't all too appealing to David Vickeroshi!

"Don't embarrass yourself! Stop it! Do you know how long it's been since I've had sex?" David said to Dorian as she trailed him up and down with kisses... Though David is one of my favorite characters, and I do like his new outlook on life, I'm not looking forward to Dorian going down this path - once again. It's just going to be a big bore to me - unless David turns the tables on her!

Matthew gets caught - and gets a new nickname!

"Would you like to explain this?" Nora asked Matthew after finding the joint… Boy, oh boy, Matthew has grown up quite a bit in these last couple of months! I was cringing at the way he was talking to Nora and Bo, while getting amused by the way Bo was freaking out! Although this is not a laughing matter, my funniest quote of the week has to go to Nora and Bo, who during their conversation, and shock of thinking their little boy, who's not so little anymore, could be smoking pot called Matthew a stoner! First Bo did, in response to Nora saying that Matthew was at home drinking hot chocolate then Nora did after finally convincing Bo to calm down and go talk to their son by saying, "Let's go talk to the stoner." I liked how Bo was able to go to Rex for a change, and think Rex is doing a great job at being a new dad!

Before you head out for the weekend, be sure to vote in my new poll, and again, I'm curious to read your thoughts so please feel free to leave them below!