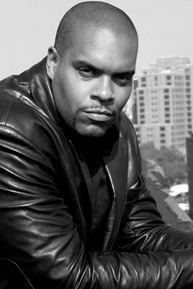 We can’t help but love the big guy who fans know as simply Shaun on One Life to Live and know who ever he’s protecting, whether it be Blair and her brood, that they’ll be taken care of! However, did you know that actor Sean Ringgold is a real-life bodyguard as well?

Though Sean told Soaps.com back in October 2006 that he’s worked as a bodyguard for many high-powered stars, he was recently on the payroll of the Cruises, yes, those Cruises! While Katie Holmes was working on Broadway in New York in “All My Sons” Sean was following her and little Suri around the big city, warding away any unwanted encounters. Now that Katie is back in California with hubby Tom, maybe we’ll see more of Sean’s character in Llanview! Also, look for Sean’s new release, “Notorious,” in theaters on January 16, where he’ll be playing Suge Knight. You can read more about that in our One Life to Live News Room!

Soaps.com got a kick out of his character kickin’ it with Addie (Pamela Payton-Wright) at a New Year’s Eve party at Dorian’s mansion, and we hope to see Sean again soon!

One Life To Live: Matthew and Cole...