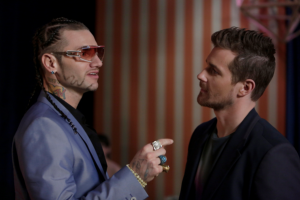 Soaps.com has the latest details surrounding what’s going on in the careers of the current and former “One Life To Live” actors. This week includes spoilers for the first week of the premiere, a Llanview head writer steps down, a character drops the f-bomb, Snoop Dogg is in the house, a new hire’s beef with James Franco, and more…

Tea Delgado Lord throws out the first f-bomb:
In our past Interview with Jeff Kwatinetz of Prospect Park we talked about the leeway the writers would have producing the show online verses on network television. iTunes released a new free One Life To Live: First Day Of School video where viewers can watch a scene featuring Tea Delgado Lord (Florencia Lozano) dropping the show’s first f-bomb while talking to her frenemy Blair Cramer (Kassie DePaiva). Whether or not this scene will be edited for the reboot is anyone’s guess.

One Life To Live available on FX Canada:
Canadian viewers will be able to view AMC and OLTL on FX Canada when the reboots premiere on Monday April 29! Details within the link.

Llanview spoilers and two-minute spoiler video:
Things are getting exciting as the April 29 12:00 PM Eastern premiere date and time closes in. Fans don’t want to miss the One Life To Live Spoilers and spoiler video for what’s set to happen for our favorite Llanview residents.

Write to the One Life To Live actors:
If you’d like to contact your favorite Llanview actors they can receive fan mail at:

Rapper Riff Raff cast:
Rapper Riff Raff has been cast to play an art dealer named Jamie Franko. Riff Raff’s character name sounds a bit like “GH’s” James Franco and there’s a reason why… It seems as though this may be the rapper’s way of getting back at Franco, considering he believes Franco copied his looks for his role as Alien in “Spring Breakers.” In an interview with GQ James Franco stated he looked at Riff Raff as one of many inspirations for the part.

Hayden Panettiere in Over The Wall:
Hayden Panettiere ("Nashville"), who played Sarah Roberts from 1994 to 1997, will appear as Billy Jean in "Over The Wall." The drama tells a story of one tragic event that tears apart the lives and relationships of four intertwined people.

Trevor St. John's In The Family at Roger Ebert's Film Festival:
Trevor St. John's (ex-Victor Lord) 2011 film "In The Family," which also starred Gina Tognoni (ex-Kelly Cramer), will be featured at this year's Roger Ebert Film Festival. The event will run from April 17 through 21 at the Virginia Theatre in downtown Champaign at 203 West Park Avenue in Champaign, Illinois. Visit the Virginia Theatre for ticket information.

Farah Fath clears the air:
Though we know Farah Fath will not be returning for the reboot as Gigi Morasco the actress took to Twitter to clear the air, as some have assumed that she had turned down an offer to return.

For the recs, Prospect Park has never asked me to join the new #OLTL. I feel like everyone thinks I turned it down but not so.#ClearingAir

In other news… The artist will write and produce the show's new theme song titled "Brand New Start," which will feature himself and singer Iza Lach, who is currently signed to Snoop's Berhane Sound System label.

"We're thrilled to have the support of such an iconic artist, like Snoop Lion. To have him write and produce the theme song for this series and to have the amazingly talented Iza Lach on board, is just incredible. We are extremely grateful and excited for fans to hear the new theme song and of course catch Snoop Lion in upcoming episodes," said Jeff Kwatinetz, Chairman and CEO of Prospect Park.

Can't believed we filmed with Snoop on One Life yesterday! He is awesome!! Highlight of my life @snoopdogg #lion twitter.com/ajtrischitta/s…

New opening:
Last week the cast taped their new opening for the reboot on April 29. Kassie DePaiva tweeted a photo of the cast.

Actors imitate Shenaz Treasury's accent:
Though Andrew Trischitta (Jack Manning) decided to pass, Kassie DePaiva (Blair Cramer), Josh Kelly (Cutter Wentworth), Tuc Watkins (David 'Vicker Man' Vickers) and Robert S. Woods (Bo Buchanan) were all challenged by Shenaz Treasury (Rama Patel) to give their best imitation of her accent. "My heart is inside of my soul and my soul is inside of my carcass…"

Jason Tam on The Genie Show:
Jason Tam (ex-Markko Rivera) recently sat down with Genie Joseph of "The Genie Show" to talk about his acting success, when he knew he wanted to be an actor, how he made casting directors and producers cry during an audition and more. "I gravitate more toward dramatic roles. Live… be available to what life has to offer."

Jessica Morris' Venom on DVD:
On June 18 MTI Video will bring Jessica Morris' (ex-Jennifer Rappaport) 2011 film "Venom" to DVD. Watch the official trailer below where Morris appears as Helen Pace, whose car breaks down - with her daughter inside - as deadly snakes pursue them.

One Life To Live fun fact:
Before John Wesley Shipp hit Llanview by storm as an abusive father named Eddie Ford he was loved by teens across the globe as Mitch Leery on "Dawson's Creek." Shipp played Dawson's (James Van Der Beek) father from 1998 to 2001 until his character was killed off in the third episode of season five. The fact that Dawson and Mitch fought before he was killed in a sudden car accident created a very anxious side to Dawson that impacted the character for good.

Please join us every Tuesday for a new "One Life To Live" Soap Digest and read which Llanview actress told us she wants her character to take a walk on the wild side through Soaps.com's One Life To Live Set Visit.