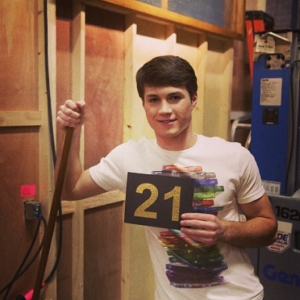 One Life to Live will be “racier” and include “a big shock.”

Whether you’ve followed the series for years or are looking for a great form of escape and entertainment, the revised version of “One Life to Live” is bound to be your newest addition.

Traveling to the Stamford, CT set of “One Life to Live” just weeks before its April 29 premiere on Hulu, I had the chance to find out what viewers can look forward to. Those who have been distraught over the show’s cancellation will be relieved to know that many of their favorite cast members have returned to the series. Furthermore, the gripping storylines that were explored in previous seasons will continue. I spend most of the day in the press room as cast members were ushered in and out between getting ready to shoot their scenes. One of the biggest differences between the show’s run on ABC and its move to the web, is that the content is somewhat more provocative. Whereas the series once had to abide by strict Daytime TV censor laws, love scenes are now less tame and more “adult” dialogue can be used. “You just get away with a little bit more and I think it’s healthy for the show,” says Melissa Archer (Natalie). “It’s great with or without that but because we’re doing it online, I think it needs that spice. Why not make it a little funkier and young?” Shenaz Treasury (Rama), whose hair is pinned up by rollers, teases that the content has “gotten racier” and “hot blooded” but is “still romantic.” “Soaps are always romantic and romance is porn for women,” she jokes. Of course, I couldn’t help asking if some of the raunchier content involves Rama. “Rama was engaged when she was six and she’s only been with one man her whole life and she’s a little bored,” says Treasury. “Then she came to Llanview, the land of the hottest men in the world, and now she has a roaming eye. She has a husband that’s wrapped around her finger. He’s very sweet and very nice and she loves him but she’s kind of thirsty for some ‘Fifty Shades of Grey’,” she says before erupting in contagious laughter. “She used to be more interested in money but now she really wants to get out there and open herself up to all kinds of experiences.” I press her for details but she isn’t allowed to say more except that we can expect “manipulation, deceit, betrayal and a big shock when it comes to Rama.”

But having more mature content doesn’t mean that the reboot is drastically different from the original series. “It’s not Playboy TV or anything,” Robert S. Woods (Bo) says with a laugh. “It’s still tasteful. It’s not for shock value. It’s current.” There’s no denying that more risqué shows, like those that air on networks on HBO and Showtime, tend to generate massive ratings. This shift could potentially lure viewers who typically don’t watch soaps to give the show a try. Once associated with homemakers, the series is now readily accessible to viewers who prefer to watch shows online at their leisure. “I think it’s more conducive to people’s busy lifestyle and it keeps the viewers wanting more,” says Laura Harrier (Destiny), one of the show’s new cast members. Robert Gorrie, who has taken on the role of Matthew and is made up as the character (gelled hair and all) when I speak to him, believes that the shows “lighting, camera work, directing and scripts” are more like a Primetime series. “There is a lot more freedom in this platform and the subject matter is very current,” Gorrie says. “It looks beautiful. It’s not your traditional soap at all and that’s going to be a challenge for this show to break down that stigma. It’s very edgy. When you can get free from the network and make your own choices, it’s a game changer.” But will the new format alienate older generations who have followed the show from the beginning? Gorrie doesn’t think so. “People transition to new technology all the time,” he says. “They’re setting a trend for the future. I believe the younger viewership will help the older viewers transition smoothly. They’re not going to be disappointed because there’s still the same characters and their storylines are continuing. They’re going to like what they see.” For Woods, the shift from TV to the net has been intriguing. “At my age, it’s exciting to watch this transition and be on the inside of it. I think it’s going to be a good time.”

Though online viewing is quickly becoming the norm, not everyone is web savvy. “I had a letter from a wonderful lady who’s been a fan of the show since it started,” says Erika Slezak, (Victoria) who is donning elegant evening wear. “She’s 86 years old, she doesn’t own a computer and she said, ‘I’m heartbroken. I won’t be able to see (the show).’ That’s a real shame. Most of our audience is computer literate but I keep thinking that maybe they’ll sneak us on to Soapnet or something like that so she can watch it.”

The show's return means that veterans of the series have had the chance to dust off characters that they were forced to let go of in 2011. "I didn't say goodbye to Blair very well," says Kassie DePaiva. "I was really sad. There wasn't a day that went by last year where a fan didn't stop me and say, 'Blair, I miss you so much. I feel like I lost a friend'." So are there places she'd like to take Blair now that she didn't in the past? "Absolutely not. I think Blair pushed the envelope as far as she could in Llanview and I think she needs to stay right where she is," DePaiva says. "Anything other than that would just be a bad road to take." "People really were unhappy," Slezak says of the show's cancellation. "All year long people would come up to me and say, 'We miss your shows. Why did they do this? Why did they take the shows away?'"

As for the fresh faces on set, the environment has been welcoming. For Harrier, joining the cast couldn't have been easier. "Everyone has been so nice and welcoming. Erika pulled me aside the first day and said, 'If you need anything, let me know. I'm always here for you.' She's like everyone's mom. She's amazing. I'm having a great time," she adds. For Corbin Bleu, who plays Jeffrey, working on a soap has been daunting but has served as valuable training. "Everybody here is so wonderful. Not just the cast but the crew as well. Everyone's been really welcoming and very open. It is a whirlwind though and the amount of work per day is very different from what I'm used to. You work on 80-100 pages a day. With film, you do 6-10. That's why I was really excited to do the show," Bleu continues, "It's a challenge but it's also exercise." Kelley Missal (Danielle) has enjoyed working with longtime cast members. "It's awesome. I've worked with a lot of the show's vets, which I'm so thankful for," she says, "Everyone has a really great relationship."

The show is now shot at Connecticut Film Center Studios in Stamford, CT, which serves as the filming locations for a number of shows, including "The Big C" and "Maury." Located roughly 40 minutes outside of NYC, Stamford is booming with industry and culture. For some, the change has been a welcomed one. "It's so pretty up here and it's kind of nice to be away from the hustle and bustle of NY," says Archer. The new location is equipped with impressively crafted sets that evoke more of a theatrical feel. All of them are located next to one another on the same sound stage. This includes basic hangout locations, like the coffee shop and the nightclub Shelter. There's also a magnificent library that could have easily been plucked from a Jane Austen novel. Rumor has it that the grandiose room is part of the mansion Vicki and Clint will be sharing. Bo's office looks as though a real police commissioner has used it. It's somewhat unkempt and therefore realistic looking. The same can be said for Matthew and Jeffery's apartment, which Dani is now going to be sharing as well. The space is boy centric, leaving me to suspect that Dani may be the odd person out in the living situation. And based on what the actors told me, I get the sense that they'll have a "Three's Company" like situation that provides a considerable degree of wit and humor. By contrast, Natalie's apartment (which she will live in alone) is wholly feminine and beautiful to look at.

When I first tour the set, there are no cast members in sight. Instead, hoards of crew members are working hard to make sure each detail of the next setup is in place. The scene that's about to be shot has a black backdrop and floor. The crew is still hammering nails into the floor when Slezak and Jerry verDorn (Clint) arrive on set. The two spend a lengthy amount of time preparing a slow dance with elements of the quickstep. Word on the set is that the sequence will be used for the show's opening. Days from now, the sets will be torn down so that "All My Children" can be shot. This means that the actors have had the same rigorous shooting schedule they became used to at ABC. "It's shot very similarly. There's still a multi-camera format and we still shoot out of order." Filming out of sequence has been somewhat of a challenge for Missal. "Sometimes you have a complete hair and make-up change and a complete mood change," Missal says. "It one seen you could be super happy and in the next you're super sad but it's been okay. They always give you more time on set if you need it." I've just found that I have to keep track of things time-wise and continuity-wise," Harrier adds. "Maybe I'm filming two scenes in a day and one's from episode 2 and the other is from episode 20. I can't react in episode 2 as I would to something later on because the situation has changed."

The hard work that the cast and crew have put into "One Life to Live" could pay off later this month when the show makes its highly awaited debut. Let's not forget that once it was announced that the series was going off the air, the ratings began to climb. Clearly, audiences weren't ready to depart Llanview.

"I can't believe that the show's back," says DePaiva. "It's still surreal to me but I'm excited."

"One Life to Live" will premiere on Monday, April 29 and can be viewed for free on Hulu, Hulu Plus and iTunes. Bookmark our OLTL reboot updates for more news on the update, promo videos and more.

Photo credit: Andrew Trischitta counting down to "OLTL" on Instagram.