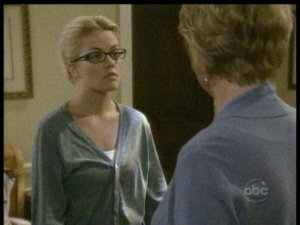 Scott Clifton crosses over from GH to OLTL!

Happy Friday, everyone! Boy, it’s nice to finally have a full week of episodes, and while the holidays are always nice I’m just glad to get back on schedule again! This week has taken us to some of the highest heights (The Palace roof) and brought us down to some of the lowest lows (the depths of the Llantano River), so let’s put our debating hats on and tear apart Llanview together!

“You’re badgering Jessica, and I will not allow it,” Bess told Viki… Before I get into my rant about this storyline, I just want to say thank you to Viki for taking away those glasses! I never knew where they came from, but they always seemed handy every time Bess wanted to resurface! Now that Viki has met the great gatekeeper, she realizes that there’s a deeper, darker secret that Jessica is hiding from, and I’m hoping Viki will have a big part in helping Jessica find out about her baby – and be able to give Starr back the child she and Cole have been mourning. Then there’s Brody, Jessica’s sounding board… He’ll have a secret of his own to deal with, so, again, I think these two will make a great pair, one that will help the other heal and live a normal life again.

Todd favors a nosedive off the Palace roof over a cannon ball!

“He’s gone,” Marty told John then confessed, “When I told him I hated him, he jumped off the roof…” I personally hope that by Todd taking the last leap, if you will, to make Marty happy, that some will look at him a little bit differently now – without excusing what he’s done in the past, of course. Like David said, one must face death before they can truly be born… And Marty, I’m not liking the way her character is going, but I do believe she must take this route to be able to claim a permanent place in Llanview’s future.

Speaking of people falling from high places, I thought it was only appropriate that we take a look back on another major fall from 1997, which involved Todd, Tea and Blair! Watching the video below, you’ll see that devious side of Tea, that ‘take no bull’ attitude from Blair and the amusement in Todd that has passed on from Roger Howarth to Trevor St. John through the recast back in 2003! Be sure to take notice of the opening credits from back then, too, as you’ll see some past favorites mixed with the current ones!

“Need a ride somewhere,” Wes asked Marty before she hopped on his motorcycle… Oh, dear, now this is the Marty I remember. Though I’m not a fan of regressing through time, I think this is just what the character needs in order for her to heal – and for us to warm up to her again. The revenge-plotting Marty just isn’t my cup of tea. Not only will those who didn’t watch the show get a peek into how Marty used to be, her actions will bring us into a whole other storyline involving her son… Bravo to Wes for being a good guy through all of this! He could have very well taken advantage of Marty, but he didn’t.

Llanview High gets a new hot teacher - and a few propositions for drugs!

"He's definitely an improvement over Mr. Keller," Starr told Langston… I haven't been more excited about a storyline in a while, and I can't wait to see where the fact that Mr. J, being Dr. Joplin's son, will lead Starr. Though it'll be normal for her to be attracted to him, I don't want to see him reciprocating the feelings - should this happen. However, given the fact that he was a drug addict, and a few from our younger crowd will be involved with drugs, I think the addition of this character will be interesting!

Sarah rats out Cris and Vanessa then leaves town…

"I told him your marriage was a fake," Sarah admitted to Cris and Vanessa… Poor Sarah, I know she never meant to get Cris in trouble by reporting his marriage to Vanessa to Immigration, but I'm sickened to say that I think this will only pull Cris and Vanessa closer. Cris has always been a faithful man, but now that Sarah left town I think he'll have a true attraction to Vanessa - and I don't like it! In any case, I want to wish Justis Bolding (Sarah) the very best! I've had the pleasure of speaking with her on a few occasions, and she'll definitely be missed!

David makes his rounds to cleanse his extra-hot robed self!

"I'm no longer interested in money. I must ask you for your forgiveness," David said to Clint… I've said this a million times, but I'll do so again - David is so darn comical! I loved seeing the way David's new vocabulary and actions had Nora and Clint nodding and bowing while repeating 'Namaste'. In fact, he used that word so many times, and I laughed at each mention, that I found myself replying to those around me with a nod - and a 'Namaste'!

Speaking of David, the funniest quote of the week has to go to the man himself during the scene where he tried to help the little old lady at The Palace… Though the lady kicked and ranted, "I don't need any help," David calmly said, "Yes, you do, you're old." However, I can't let this week go by without giving Alex a shout out for her reply to Dorian in St. Blazes when Dorian talked about Jared being a scam artist and said, "Of course he'd have no trouble getting a hold of David's DNA," to which Alex replied, "There's plenty of it at your house!"

Dorian sends another man to the bottle - involuntarily - to further her own needs!

"We slept together all night long," Dorian refreshed Beaver's blurry memory… How many more men are going to fall for Dorian's schemes? I'm assuming her plan will be to seduce David into marriage, but I hope the show doesn't take us down this road again. There are already so many storylines surrounding the Buchanans right now, we do not need another B.E. takeover thrown into the mix. Insert a nod from Amy here - and a 'Namaste'!

Thanks for stopping by this week, and please don't forget to vote in my poll below - and leave me your thoughts as well in the comment area! I always look forward to reading what others have to think. Whether we agree or disagree, it's all in fun!

One Life to Live: Charlotte...

One Life To Live: Matthew and Cole...