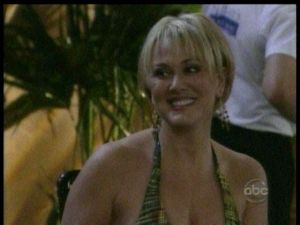 With the holidays winding down, it’s been another short week in Llanview, as the show was pre-empted on New Year’s Eve and New Year’s Day, but, as always, there were a few eventful scenes this past week! Thanks for stopping by to rehash them with me so on with the show!

“What’re you, the new towel girl?” Dorian asked, to which Alex replied, “Funny, I own the place…” Oh, boy, Alex and Dorian on a tropical resort with a secret about David that could affect a ton of people, things are going to be interesting in the coming weeks!

David makes the cold trek back to Llanview and lets some skeletons out of Dorian’s closet!

“I gave up everything I had, and now I have everything I want,” David told Viki and Charlie after giving them the goods on Dorian… Though David may feel like a newly cleansed man, I have a hard time believing that it’ll last! After all, what fun would David Vickers be if he wasn’t getting into one scheme or another. When he finds out he’s inherited all of the Buchanan money, he’ll either make good of it (can you say, “Boring?”) or he’ll switch back into David mode and live the high life – with Nigel at his beck and call (Can you say, “Classic David style?”) Since Tuc Watkins plans to be back in town for about two months, things should be eventful!

Since David has been involved in so much deception in Llanview throughout the years, I’ve dug up a video clip from 1994 where David was pretending to be Viki’s brother – and where Dorian called him on it and warned David not to cross her!

Asa returns and redistributes his empire!

“You knew the stakes… stocks up, you’re rich, stocks down, you’re broke. You blew it,” Asa addressed his loved ones before kicking them all to the curb… All of them except his long lost son, David Vickers! Boy, I’ve missed Asa, and it was nice to see him come back from the grave and take control of his kids’ lives yet again! I have a feeling the Buchanan’s will be scrambling to hold on to their legacy, and I can’t wait for David to finally find out the truth – that he’s a Buchanan. However, given that Bo (while Asa) never slept with Emma (Gigi) during the 1968 storyline, I wonder if somehow David will end up not being a Buchanan after all. The whole plot of the storyline, including Dorian and Alex’s part in it, will be full of surprises, I’m sure!

Gigi pulls Rex out of the Puddle and pushes him in some Mudd!

"Here to make sure we kick this off right, Puddle of Mudd!" Rex announced on New Year's Eve at Ultra Violet… I realize there are many fans who could do without the musical appearances on the show, but I think they are great! Seeing that Llanview has two clubs, it's nice to see some real stars in there jamming out the tunes instead of just having the onscreen talents performing all of the time. Puddle of Mudd happens to be one of my favorites, so this New Year's Eve in Llanview had me rockin'! If you missed their performance, I added a video to the One Life to Live News Room!

Marty visits Todd and invites him to be her date!

"I came to retrieve something I left behind," Marty told an unsuspecting Todd from within her old bedroom at the Manning Estate… Now, that's a statement filled with so many unanswered questions. Did Marty really go back to Todd's to get her journal, was she looking to find the woman who fell in love with Todd, or did she need an extra incentive to push forward with her revenge plot, which is getting old fast, if you ask me. And the whole New Year's date… Though Marty is clearly out for revenge, I can't help but think that she really is fighting a deeper love for Todd than she thought! I have a feeling that Todd may redeem himself in the eyes of many next week - if he survives the fall! I think this is exactly how the writers plan to give the character of Todd redemption!

John gives up his badge for the keys to the local bar and grill!

"I bought this place," John explained to Blair… You know what, this is funny because back in the beginning of December I did a poll on the One Life homepage of Soaps.com asking, "Where should John go from here?" One of my answers was, "Become the new manager at Rodi's." Well, John, you one-upped me, and I think Rodi's is a great fit for him! If Rodi's was my local hometown bar and grill, with an owner like that, you'd bet I'd be a frequent patron!

That's it for this week, fans. I hope you enjoyed my thoughts, and please take a moment to leave me yours as well! Before you leave for the weekend, be sure to vote in this week's fun poll!

One Life to Live: Puddle of Mudd...