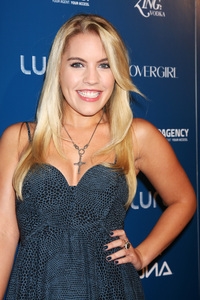 Soaps.com has the latest details surrounding what’s going on in the careers of the current and former “One Life To Live” actors. This week includes a former actor who honored our troops, a video message from Sam Manning portrayer to his Llanview mother figure, a new duet, a word from one of the new head writers, if the “GH” actors will be coming back to Llanview and more…

Kerry Butler at 54 Below:
On Monday February 11 one of Broadway’s finest Kerry Butler, who played Claudia Reston from 2006 to 2007, will be featured during Andrew Lippa’s (“The Addam’s Family”) show at 54 Below Broadway’s Nightclub at 254 West 54th Street, Cellar in New York City, New York. Doors open at 8:45 PM with the show beginning at 9:00 PM. Look for Lippa and friends to perform songs from their NAMT Festival shows, as well as from upcoming projects. Visit 54 Below to purchase tickets and please note, for those who plan to purchase tickets the day of the event you can only do so by calling 1-866-468-7619.

Erika Slezak comments on joining Prospect Park:
Erika Slezak, who played matriarch Victoria Lord from 1971 to 2012, finally breaks her silence. Through Erika Slezak’s official website the actress stated, “I am pleased to officially announce that, pending the final contract, I am joining the revival of ‘One Life to Live’ which will be produced by Prospect Park and aired on Hulu and iTunes on the internet. We expect to begin production near the middle of March and the air dates are yet to be announced. This will be an exciting and groundbreaking adventure and we hope that you will all join us as we bring back all the characters you loved and possibly some new ones. I will let you all know when a firm air date is announced.”

Brittany Underwood's duet:
Langston Wilde portrayer Brittany Underwood has been working on her music these days. First with her new single Flow and now a duet with singer/songwriter Sam Shrieve, who released his first full length album in May 2009. Underwood tweeted about the song, which we will bring to readers when it's available.

Just finished writing a SUPER touching song with @samshrieve can't WAIT for you guys to hear this one, brought me to tears...dammit Sam! Lol

Kamar de los Reyes honors Armed Forces:
Kamar de los Reyes (ex-Antonio Vega) who voices Raul Menendez in Activision's Call Of Duty: Black Ops II, recently toured three military bases with a few of his fellow video game actors, including James Burns (voice of Frank Woods) and Rich McDonald (voice of David 'Section' Mason). The game has reached record sales of over one billion dollars. As a way for Activision to give back and honor our troops the actors delivered free copies of the game and even played a few rounds opposite the soldiers. Reyes tweeted his own thanks and a few photos below.

Thank you @the_uso for giving me the opportunity to meet all the young men and women in our #armed forces. They're amazing!

This is what it's all about...the #US #Army! We are so lucky. These men and women are amazing. @the_uso twitter.com/kamardelosreye…

Patrick Gibbons' treat for Kassie DePaiva:
Blair Cramer took Sam Manning under her wing when his father Victor Lord (Trevor St. John) couldn't be there for him. The actors have remained in touch and in last week's digest we passed along a photo of Gibbons showing off his new guitar. Recently he posted a video on Twitter with a message for his onscreen mother figure that started with, "This is for you, Kassie."

In response, Kassie expressed her love for Gibbons and tweeted this photo:

One Life To Live fun fact:
Hillary B. Smith, who played Nora Hanen Buchanan from 1992 to 2012, is a mother to a son and a daughter - one of which has also appeared in Daytime. In 1988 and 1989 her son Philip Webster Smith IV played the first Adam Munson on "As The World Turns."