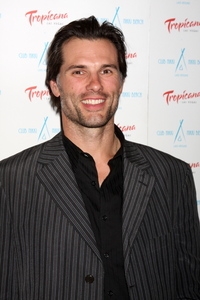 Soaps.com has the latest details surrounding what’s going on in the careers of the former “One Life To Live” actors. This week includes new pilot information, another actor heading to a popular Primetime series, an award nomination, a new single on iTunes, how you can go to boot camp with a Llanview alum as your trainer, and the possibility of seeing Llanview again online…

One Life To Live migrating online?
Yesterday news broke of Prospect Park Migrating AMC And OLTL Online after having to bail on the project in November 2011. Visit the link for details then leave us a comment with your thoughts on the possibility.

Josh Kelly on Rizzoli And Isles:
The actor who played Cutter Wentworth, Josh Kelly, will be heading back to Primetime with a guest role on TNT’s “Rizzoli And Isles.” Look for Kelly in the Tuesday December 25 episode. The series airs at 9:00 PM and also stars former “All My Children” actor Colin Egglesfield (ex-Josh Madden) as Tommy Rizzoli.

I teach a Bootcamper class in New Jersey if anybody wants get in shape.It’s fun torture. Moohaha!!!!

Scott Evans in Lily & Kate:
Scott Evans (ex-Oliver Fish) will appear as Nick in Micael Preysler's directorial debut comedy film "Lily & Kate." The film stars Hannah Murray ("Skins") as Kat and Jessica Rothenberg ("Gossip Girl") as Lily and follows the best friends as they spend their final days together, enjoying the nightlife and the affections of a mysterious artist. Keep an eye out for its 2013 release. On another note, according to TMZ, in regards to Scott Evans' Arrest the actor allegedly appeared in court on Thursday December 13 with attorney Shepard Kopp and submitted a not-guilty plea to the cocaine charge. Evans' next court date is Monday January 14, 2013.

Robert Leeshock in Come As You Are:
A lot of actors are involved in short films these days, and Robert Leeshock (ex-Bruce Bartlett) is currently taking part in one titled "Come As You Are." The former Llanview bad boy will appear as Coach Randle in the story of a high school star athlete who is rejected by his peers, friends and family after setting out on an unexpected journey.

Mikey Jerome's The Bubble Zone video:
In October Soaps.com reported details on Mikey Jerome's (ex-Ted Osbourne) short film, "The Bubble Zone," by Raymond Dussault. Film editor Andrew Kenoff has shared the comedy in its entirety, which you can watch below, and look for Jerome as Josh at around the 6:50 mark.

Jason Tam's Do No Harm premiere date:
Jason Tam's (ex-Markko Rivera) new NBC pilot, "Do No Harm," will premiere on Thursday January 31 at 10:00 PM. Tam will play Brandon and took to Twitter to announce the date and urge fans to tune in.

#DoNoHarm will premiere Thursday January 31st at 10 pm, right after the series finale of #30Rock. Tune in!

Shenell Edmonds nominated for a NAACP Award:
Last week the NAACP Image Awards Daytime Nominations were announced, and we were happy to see a former Llanview actress in the mix. Congrats to Shenell Edmonds (ex-Destiny Evans) on her nomination! Of her nomination the actress tweeted:

Morning everyone.! I'd like to say thanx to @naacpimageaward for the nomination and congrats to all the other nominees.! Have a great day.!

Brittany Underwood's single on iTunes:
Langston Wilde portrayer, Brittany Underwood, has completed work on her first single titled "Flow." If you'd like to listen to a preview and order it visit Flow iTunes. The actress tweeted her excitement and cover art:

One Life To Live fun fact:
Tuc Watkins, who played David Vickers from 1994 to 2012, landed his first big television role in 1990 as a trainer on the popular sitcom "Growing Pains." Prior to that he turned up in various commercials for Miller Beer, Snickers and the U.S. Navy, and as a kid living in Shawnee Mission, Kansas his next-door neighbor was actress Brooke Dillman ("2 Broke Girls"), who also takes part in the series "Where The Bears Are" with Watkins these days.

Do you want to know what the former Pine Valley actors are doing too? Read our All My Children Soap Digest and view Soaps.com's Primetime Dish for details on "Dallas'" JR Ewing's funeral.