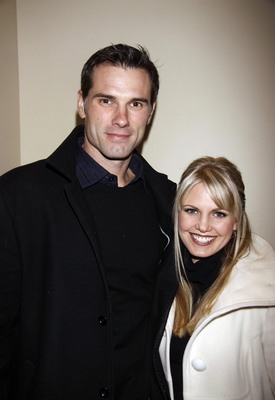 Soaps.com has the latest details surrounding what’s going on in the careers of the former “One Life To Live” actors. This week includes baby news, guest starring air dates, a peek into a hair and makeup trailer, a special message to one actress’ fans for their continued support and one of Llanview’s biggest villains sings again…

Dan Gauthier in BFFs:
The actor who played Kevin Buchanan from 2003 to 2010 will be appearing in a new comedy film. Directed by Andrew Putschoegl, Dan Gauthier is currently filming scenes for the role of David in the tale that follows two best friends who pretend to be lovers at a couples retreat. However, what started out as a way to take advantage of material luxuries turns into something else and the girls question where the line of lover and BFF should be drawn. Look for its release sometime in 2013.

Bree Williamson’s Deception air date:
Back in May we alerted fans to Bree Williamson’s (ex-Jessica Brennan) guest role on the new NBC series “Infamous.” The series has since been renamed “Deception,” where Williamson will first appear on Monday January 7, 2013. Still no word on her character but check your local listings for show times. Also, don’t forget to tune in to the SyFy channel on Friday November 16 for Williamson’s next “Haven” (the series was just renewed for season four) appearance at 10:00 PM as Claire Callahan.

Nice work today organizing supplies and goods. Back at it again tomorrow morning

Robin Strasser’s message to fans:
Robin Strasser (ex-Dorian Lord) recently reopened her hotline and left an important message for fans who would like to help those in the Rockaway area suffering the effects from Hurricane Sandy. Call 1-212-414-5300 for that and more from the actress. Please Note: Long distance charges may apply, depending on your phone plan.

Jessica Leccia in The Carrie Diaries:
The CW has a new show hitting their line-up on Monday January 14 at 8:00 PM. “The Carrie Diaries” is based off Candace Bushnell’s novel, which is a prequel to “Sex And The City.” Though we don’t have an air date yet, Llanview fans can expect to see Jessica Leccia (ex-Inez Salinger) sometime during season one in a guest starring role. Stay tuned for more details as they are released.

Jackie Hoffman's The New Normal air date:
A while back we reported that the actress who played Eunice Burns would be appearing on the NBC series. Look for Jackie Hoffman as Frances in Tuesday's November 20 episode at 9:30 PM.

Daphnee Duplaix in Unreported:
Daphnee Duplaix, who played Rachel Gannon from 2009 to 2010, has landed a role in the upcoming thriller "Unreported" as Michelle. Written and directed by Jason E. Barnes the plot surrounds Justin Lake's (Dylan Mooney) psychological breakdown after waking up next to a dead woman, with no memory of the night before, and leaving the scene of the crime. Stay tuned for the film's release date.

Kassie DePaiva thanks fans:
We may not get to see Blair Manning in Llanview anymore, but Kassie DePaiva has been able to keep the character alive by making a few guest appearances crossing over to "General Hospital's" Port Charles. Her fans appreciate it and aren't afraid to show how much! DePaiva tweeted a photo of all of the goodies she found from fans upon arriving at the ABC studios for her brief PC return, which she has already finished taping. Look for her to appear on "GH" on November 27, 29 and 30 and December 3.

I have the best fans in the world... TnBer's rock twitter.com/KassieDePaiva/…

Tom Degnan's Reserved For Rondee event:
Tom Degnan, who played Joey Buchanan, along with former "As The World Turns'" actor Billy Magnussen (ex-Casey Hughes), will bring their band Reserved For Rondee to Arlene's Grocery Bar on Saturday November 17 at 11:00 PM. If you plan to attend it's wise to get there by 10:00 PM to get a good spot. Visit Arlene's Grocery to purchase tickets.

Roscoe Born's new songs:
The man who played Llanview's notorious villain, Mitch Laurence, has released two more solo songs! Check out the latest videos, produced and directed by Paul Robinson, of Born's songs "We Too Have A Dream" and "If It Don't Stink, Don't Stir The Pot."

This time in Llanview history:
On June 18, 2009 Rex Balsom (John-Paul Lavoisier) and Stacy Morasco (Crystal Hunt) snuck into the Llanview Country Club with Rex using the name Mr. Underhill. Under the guise, they charged up a tab but ended up dragged to the station, leaving Rex to face a disappointed Bo - furious that Rex had robbed his family's business and that he was with Gigi's sister doing it!

Do you want to know what the former Pine Valley actors are doing too? Read our All My Children Soap Digest, and view Soaps.com's Primetime Dish for details on "Fairly Legal's" cancellation.

Michael B. Jordan Sizzles In Shirtless Photo As He Goes For A Dip In St. Bart’s — See Pic